The place where the shofar sounded in Jerusalem still urges me to consider ancient themes, says Dr. Wayne Stiles.

By WAYNE STILES
SEPTEMBER 26, 2011 17:24
Southern steps in Jerusalem 311
(photo credit: Wayne Stiles)
Advertisement
Wayne Stiles is an author who has never recovered from his travels in Israel—and loves to write about them from his desk in Texas.Whenever I visit the Jerusalem Archaeological Park, I always walk to the southwest corner of the Temple Mount. There, excavations have uncovered a portion of the first-century street that stretched north along the original Western Wall. One hundred meters north of the corner, the Kotel, offers a portion of the Western Wall for Jews and tourists to pray. Beneath the ground of the Kotel, Jerusalem’s Central Valley has been filled in with the rubble of the Second Temple’s destruction in A.D. 70.  As a result, the beautiful modern plaza stands about nine meters above the first-century street uncovered at the southwestern corner.The excavations near the corner came about through the generosity of a distinguished member of the Jewish Federation of Metropolitan Detroit (who also owns the Detroit Pistons). The ten-meter wide street was laid with stone slabs, some a foot thick. Standing on the street today, it isn’t hard to imagine the Romans hurling the massive temple stones from above, literally crushing and pressing the pavement blocks into the ground. Archaeologists have removed most of the rubble, but they left one pile of stones just as they found them—the street still depressed from the force of the impact. 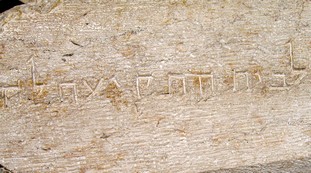 Photo: Wayne StilesOne of the main reasons I continually return to this corner of the Temple Mount is because of one particular stone that lies on the street far below where it originally stood. Shaped as a corner, the stone bears the Hebrew inscription: “To the place of trumpeting.” This stone represented the pinnacle of the southwestern corner of the Temple Mount, the place where priests would stand and overlook Jerusalem as they blew trumpets to announce the Sabbath and the start of festival days. The Feast of Trumpets especially relates to this act: “Speak to the sons of Israel, saying, ‘In the seventh month on the first of the month you shall have a rest, a reminder by blowing of trumpets, a holy convocation. You shall not do any laborious work, but you shall present an offering by fire to the Lord’” (Leviticus 23:24–25; see also Numbers 29:1–6). The Feast of Trumpets prepares the way for the Jewish New Year, Rosh Hashana. The trumpets originally were intended to call God's people together in preparation for the fall festival of Yom Kippur.

Click for full Jpost coverageOnce when I visited a Jerusalem shop, I saw a long, beautiful shofar—the horn from a ram. The merchant pressed it to his lips and released a long blast followed by a half-dozen short ones. Nothing sounds like the shofar—especially when blown in Jerusalem. It sounded marvelous! Alfred Edersheim offers some helpful background on the blowing of the shofar: 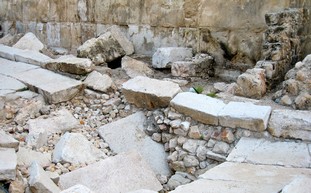 Photo: Wayne Stiles"Originally the shofar was probably a ram’s horn (Josephus, Ant. v. 5, 6.), but afterward it was also made of metal. The Shofar was chiefly used for its loud and far-sounding tones (Exodus 19:16, 19; 20:18; Isaiah 58:1). At the Feast of the New Year, one priest with a shofar was placed between those who blew the trumpets; while on fast-days a priest with a shofar stood on each side of them—the tones of the shofar being prolonged beyond those of the trumpets. In the synagogues out of Jerusalem the shofar alone was blown at the New Year, and on fast-days only trumpets." (The Temple: Its Ministry and Services)Hearing the shofar echo across Jerusalem takes my mind in several directions. I think of the southwestern corner of the Temple Mount and the opening line from the song, “Yerushalaim Shel Zahav,” which says, “A shofar calls out on the Temple Mount in the Old City . . .” I try to imagine the priests of old standing at the pinnacle of the temple, calling God’s people to worship at the High Holidays. I also think about the renewal and re-dedication that Rosh Hashana necessitates. Moreover, I consider the grace that the shofar’s call represents—urging worshippers to come before the Lord who forgives sins on the basis of the sacrifice God required (Leviticus 16:30). How to Get There:
In Jerusalem, enter the Dung Gate and take an immediate left, following the path around to the entrance to the Jerusalem Archaeological Park. Follow the pathway until it turns left toward the southwestern corner of the Temple Mount. The stone “to the place of trumpeting” lies at the bottom of the wooden staircase.  What to Do There:
Walk along the first-century street, and observe the place where ancient shops stood in the shadow of Robinson’s Arch. Have a shofar? Blow it at the place where the inscription reads: “To the place of trumpeting.” Read there Leviticus 23:24–25 and Numbers 29:1–6.Read Wayne’s blog and subscribe to his weekly Podcast at www.waynestiles.com.
Tell us your storyHere at JPost we’re interested to hear which moments defined this past year for you personally, and how they will influence the year ahead.We want to hear about the changes that impacted your year, whether it be a decision you've made, a personal gain or loss, a family event or a community gathering. Tell us about your experience how it affected you and what you’ve gained from it in order to improve the next year. Please send in your stories in text, image or video (or any combination of the above mentioned), to  lifestyle@jpost.com. The best story will win a two-night weekend stay at The Grand Court Hotel in Jerusalem. The winner will be chosen by a panel composed of Lifestyle Editor Yoni Cohen, Internet Desk Manager Elana Kirsh and Managing Editor Moshe Raphaely. Stories must be submitted by Wednesday, October 12, 2011. The winner will be announced the following week on Wednesday October 19.Selected entries will be published on JPost.com.
Advertisement
Subscribe for our daily newsletter