By YAAKOV LAPPIN, JPOST.COM STAFF
DECEMBER 4, 2010 10:59
Nite fire 311
(photo credit: Channel 10 News.)
A police spokesman said that the joint investigation team in the North has determined that the first and largest fire, in the Carmel, was not a case of arson but was started by an act of negligence by the area's residents.Rescue personnel, firefighters and police rescued several employees of the Ya'arot Hacarmel hotel Saturday morning. One of the employees was treated by MDA for smoke inhalation. The employees had already been evacuated but returned to the hotel on their own.Forty-one people have been killed and scores injured by the fire. Over 17,000 residents of northern Israel have been evacuated from their homes.Firefighters trying to put out fires across the Carmel are "in the same situation that they were in yesterday at nightfall. Currently we are starting the morning with the same tactics that we used yeserday, pushing the fire from green areas to areas that were already burned," Reshef Hezi Levy, a spokesman for firefighting services in Haifa, told Israel Radio Saturday morning.However, Levy said that "we are still far from attaining control over the fire, but we are advancing step by step and are following the plan we formed yesterday and we are pleased with the results." RELATED:
Up-to-date map of fires raging in Carmel
Two nabbed on suspicion of lighting fires in North
Turkey offers assistance in Carmel fire despite tensions
Carmel fire: Barak instructs IDF to mobilize forces
Aharonovitch confirms 3 still missing; search continuesFirefighters restarted efforts to put out the Carmel blaze Saturday morning as more planes from Russia, France, and Greece were en route to Israel to assist with the fire.The blaze continued to rage across the Carmel Saturday morning, between Route 4 and Kibbutz Beit Oren and from western Usfiya to Nir Etzion.Overnight Friday, four policemen were lightly injured from smoke inhalation, and most recently the body of 16-year-old Elad Riven, who volunteered to help with efforts to control the fires, was found, according to a report by Israel Radio.Riven initially reported missing after he assisted in rescue efforts.In addition to casualties, over 8,600 acres (35,000 dunams) and 4 million trees were reportedly burned as of Friday evening. Firefighters said that it could take a week before they are able to extinguish the blaze, Channel 10 reported. Winds showed no sign of dying down overnight.Overnight Friday, helicopters led to safety three fire trucks as well as police that were surrounded by flames in Ein Hod. Firefighters also managed to contain fires that were raging in the villages of Usfiya, however several smaller fires broke out throughout the North on Friday. No injuries were reported.In Ein Hod, where the fire continued to rage, a family refused to evacuate their home.Police arrived at their home to evacuate them by force, but when the family realized the danger they were in, they agreed to leave voluntarily.A fire also broke out Friday overnight near the Maalot-Tarshiha area, but has been contained.
Police suspect an arsonist started the fire as several people were seen fleeing the area shortly before the outbreak of the fire.The blaze marks the worst ever fire in the Israel's history, after a bus carrying dozens of members of the Israel Prisons Service was incinerated, killing everyone on board, and thousands upon thousands of dunams of forests on the Carmel Mountain ridge were destroyed, with dozens of people injured.Additional number for information for affected families: 08 977-5717Hotline for immigrants living in the North who might be in need of assistance: 1255081010Police ask all volunteers not to approach fire zones. Volunteers should call Lev Ehad on 02 675 5150 for instructions, or 02 675 5185Yaakov Katz and Tovah Lazaroff contributed to this report.Up-to-date map of fires raging in Carmel 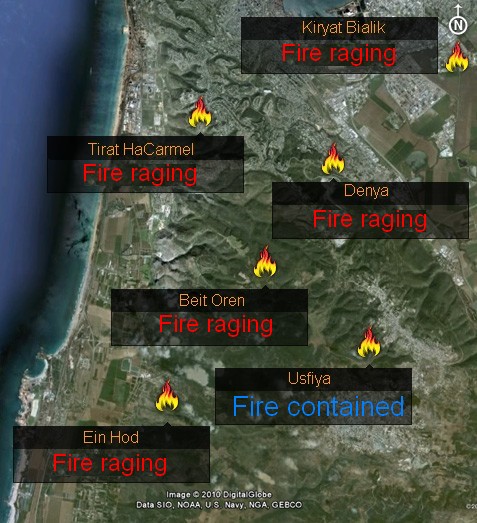