After Saif al-Islam arrested, spokesman for Libya's outgoing interim gov't says he will be tried in Libya rather than The Hague.

By REUTERS
NOVEMBER 19, 2011 19:02
Saif al-Islam Gaddafi 311 (R)
(photo credit: REUTERS/Ismail Zitouny)
Advertisement
THE HAGUE - The International Criminal Court Chief Prosecutor will go to Libya in a week to discuss how and where Muammar Gaddafi's son, Saif al-Islam, will be prosecuted following his capture.Saif al-Islam, once tipped to succeed his late father as Libyan leader, was seized in the southern Libyan desert by fighters who vowed to hold him in their mountain town of Zintan until there was an administration to hand him over to.RELATED:
'Gaddafi son, Saif al-Islam, offers to surrender to Hague'
NTC officials: Gaddafi and son buried at dawn in LibyaThe ICC, which has issued an arrest warrant for Saif al-Islam on charges of crimes against humanity, was in contact with Libyan Justice Ministry, and chief prosecutor Luis Moreno-Ocampo would visit Libya in a week."I'm going to Libya to discuss how we manage this issue. But the news is Saif will get justice. Where and how, that we will discuss," Moreno-Ocampo told reporters."They know the case we presented at ICC. I have to learn what they have there, we have to discuss it." 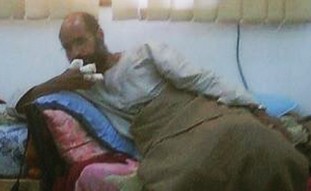 A spokesman for Libya's outgoing interim government said that Saif al-Islam would be tried in the country rather than being sent to the ICC in The Hague."This is the final chapter of the Libyan drama," Information Minister Mahmoud Shammam told Reuters. "We will put him on trial in Libya and he will be judged by Libyan law for his crimes."Gaddafi, like his late father, was indicted for crimes against humanity by the ICC over his alleged role in killing demonstrators after the anti-Gaddafi uprising began in February. But Libyans also want to try him for previous alleged crimes.The ICC has the right to put Saif al-Islam on trial only if Libya was unwilling or unable to do it, human rights group No Peace Without Justice said in a statement."We urge the ICC to be ready to try Saif al-Islam themselves, preferably in Libya, by ensuring it is ready to establish a field presence and begin outreach to victims and the affected communities immediately," the group said.The European Union urged Libya to work with the ICC to bring Saif al-Islam to justice, while NATO, which bombed Gaddafi's military to help rebels topple the Libyan leader, said it trusted that Libya and the ICC would ensure justice for Saif.But human rights groups expressed concern about how Saif al-Islam would be treated now in Libya."The apparent killings in custody of Muammar Gaddafi and his son Mo'tassim Gaddafi on October 20 are particular cause for concern about Saif al-Islam's treatment," Human Rights Watch said in a statement.In addition to arrest warrants for Muammar Gaddafi and Saif al-Islam, the ICC also seeks Libyan intelligence chief Abdullah al-Senussi on charges of crimes against humanity but he is still on the run.Libya's interim government spokesman Shammam said al-Senussi would be found in time. "We will hunt him until we capture him or kill him," he said.
Advertisement
Subscribe for our daily newsletter