In 2018 and 2019 the salary payments appeared in the PA's Budget Performance Reports, but this year they have disappeared, while spending on the PLO has shot up. 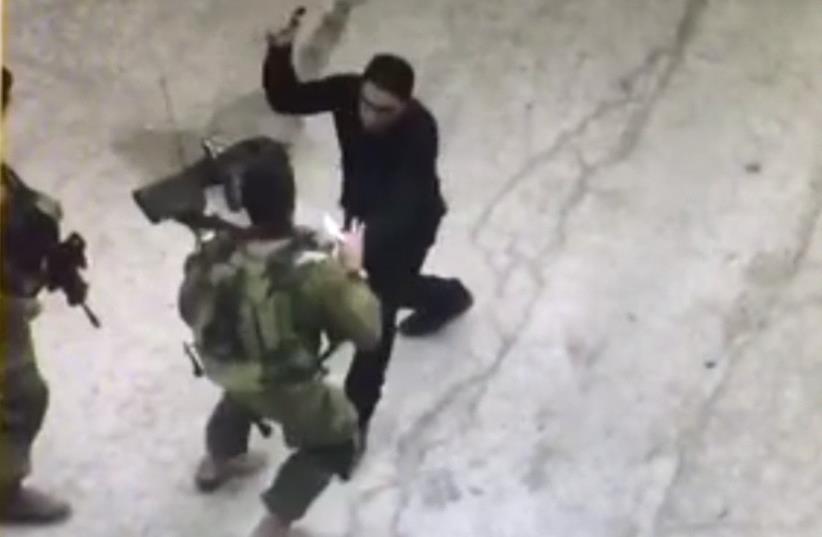 Palestinian terror attack in Hebron
(photo credit: screenshot)
Advertisement
Monthly budget documents prepared by the Palestinian Authority for 2020 show that it is attempting to hide the salaries it pays terrorists from international donors, making a sham of its commitment to financial transparency.The PA receives hundreds of millions of dollars annually from donor countries around the world and is therefore obliged to produce fully transparent financial records, with all expenses listed, for the benefit of its donors. However, its “pay to slay” scheme, which pays terrorists a monthly stipend, likely falls foul of international law, leaving it unable to openly declare the payments within its budget.Consequently, the NGO Palestinian Media Watch (PMW) has found that the PA is diverting the payments through the Palestine Liberation Organization (PLO), a trick it has used in the past.“Ever since PMW notified the donor countries that the PA is paying salaries to terrorist prisoners with their money, the PA has been doing everything it can to confuse the donors," Itamar Marcus, director of the media watchdog."In 2014, the PA closed the PA Ministry of Prisoners’ Affairs, and in 2015 it created the PLO Commission of Prisoners’ Affairs. In 2018, it reopened the PA Ministry of Prisoners’ Affairs and in 2019 it changed its name to the Commission for Detainees’ Affairs. Now in 2020, it is trying to hide its payments by moving them once again from the PA to the PLO.”Detailed analysis of the PA's Budget Performance Reports shows that in 2018, the PA spent NIS 736 million financing the Ministry of Prisoners' Affairs. The following year the Authority spent a further NIS 619m. financing the Commission for Detainees' Affairs, of which NIS 517m. was spent on terrorists’ salaries. In the 2020 reports, however, neither organization is listed, but the monies paid to the PLO have increased significantly, from just over NIS 400m. to more than NIS 700m.In late April, the World Bank warned that the PA faced a $1 billion budget deficit this year as donor payments contracted, partly as a response to the coronavirus pandemic. The authority itself put the shortfall at closer to $1.4 billion, and announced that it would be staggering social and public servant payments in March to ensure that all payments were met.However, within the announcement came an admission by PA Prime Minister Muhammad Shtayyeh that payments to terrorists were not only continuing, but were being prioritized by the authority.Medical and supporting personnel were paid first, followed by Security Forces staff. Terrorist prisoners and the families of the martyrs were the next to receive their stipend. This meant that payments to terrorists were prioritized ahead of welfare payments, teachers' salaries and public servants.“The PA’s monthly reports, which are supposed to be a transparent reflection of its real expenses for the benefit of donor countries, do not list even one shekel of payment to terrorist prisoners in 2020," Marcus commented. "Yet the PA prime minister openly announced in March that the PA is even giving priority to prisoners’ salaries. Clearly the PA’s published “transparent” reports are just a charade to distract donors.”Maurice Hirsch, Head of Legal Strategies at PMW went even further, accusing the International Criminal Court of colluding with the PA to hide the payments, so as not to fall foul of rules on donor funding."In December 2019, Fatou Bensouda, the Prosecutor of the International Criminal Court, recognized that the PA salary payments to the terrorist prisoners give rise to an offense according to the Rome Statute," Hirsch said. "As PMW exposed, Bensouda later met with PA Prime Minister Shtayyeh and is openly coordinating and colluding with Palestinian terrorists groups."He continued: "Now, suddenly, the PA is again trying to hide these payments. One can only wonder if, as part of their collusion, it was the ICC prosecutor herself who recommended that the PA and Shtayyeh do what they can to hide the terror reward payments."Four countries – the US, Canada, Australia and Holland – already withhold aid to the PA as a direct result of PMW's exposure of the terror payments in parliaments around the world. In 2018, Israel also passed legislation imposing punitive sanctions on the PA for its continuing salary payments to terrorists, while other anti-terror legislation is also being used to seize the salaries paid to Israeli Arab terrorists.However, in early April the EU announced an extra €71 million to help the Palestinians combat the coronavirus pandemic. Making the announcement at a video meeting with Shtayyah, head of the Office of the EU Representative to the West Bank and Gaza Strip Sven Kuhn von Burgsdorff said: “The coronavirus pandemic is an unprecedented, global public health emergency with repercussions for our citizens, societies and economies. This is a time for solidarity between peoples and the time for us to stand together.”