By DAVID BRINN
JANUARY 3, 2012 21:06
Fuerza Bruta_311
(photo credit: Courtesy of Arbel/PR)
Advertisement
LSD was never this colorful. Imagine a combination of Cirque du Soleil’s fantastical journey, Blue Man Group’s visceral flamboyance and a pulsating New York nightclub with water sprinklers spraying down on the dancers. It still won’t come close to Fuerza Bruta, an Argentinean-founded multi-sensory, gravitydefying extravaganza that is landing in Tel Aviv next month for 28 shows between February 2 and 18 at the Maxi Dome at the Tel Aviv Exhibition Grounds.The 65-minute performance containing futuristic music, dance, acrobatics and sometimes unbelievable visuals and props – and no small amount of audience participation – has been staged around the world since debuting in 2006. The show’s ongoing New York run has become the “go-to” event for celebrities, with everyone from Leonardo DiCaprio and Ashton Kutcher to Beyonce and Jay-Z showing up to see what the buzz is about. 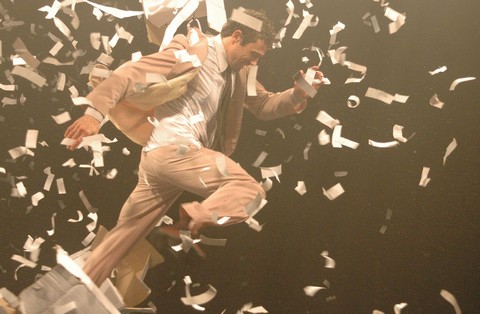 According to the Argentinean creators – artistic director Diqui James and musical director Gaby Kerpel – Fuerza Bruta (meaning “brute force”) is an event where “worlds collide, dreams are real and reality takes a back seat.”The suspension of belief includes performers running and tumbling across a vertical wall of technicolor cloth, a huge whirling sail overhead and, in its most surreal moment, exotically clad dancers performing a “water dance” in a sea above the audience’s head.“The first thing I had in mind was a girl walking in the air, over the audience’s head, playing with a puddle of water that was following her,” James said during an interview two years ago. “After a lot of research, we found a very strong, 1/4 mm. thick transparent material which we used to build the flying pool.”The audience likely won’t even feel the slight crick in the neck from standing the entire show and staring up at the ceiling in wonderment. The shows in Israel are being sponsored by Orange, and tickets for the first 11 shows have been set aside exclusively for Orange subscribers.For more information: www.fuerzabruta.co.il.
Advertisement
Subscribe for our daily newsletter