In the arms of an angel

In Rina Schenfeld's new work, she says the figures of a man and a woman can be symbolic rather than literal. 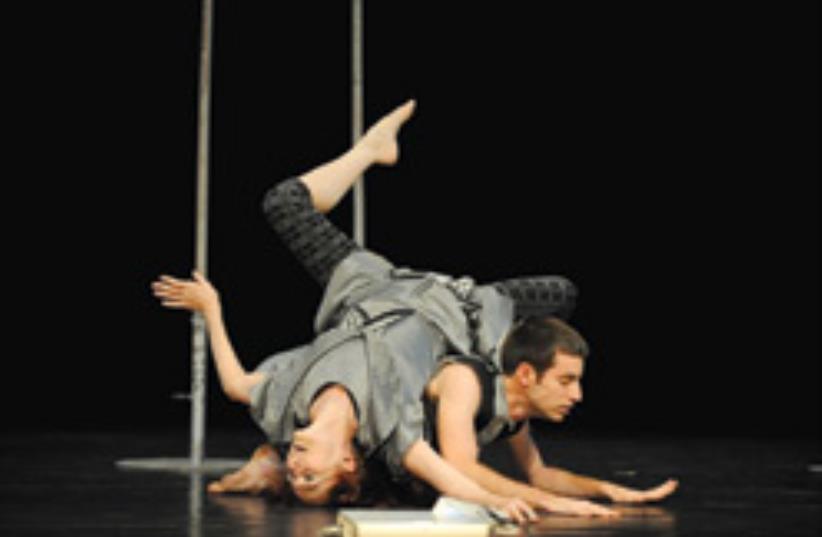 Schenfeld first made a name for herself as a powerhouse dancer with the Batsheva Dance Company from its inception in 1964 until 1979. But from a young age, she was already fascinated by choreography. Prior to studying at the prestigious Juilliard School, an 18-year-old Schenfeld created a prize-winning solo for herself. She went on to choreograph many dances for Batsheva, eventually retiring from the company in order to further pursue her own work.

Over decades of choreographic exploration, Schenfeld experimented with objects, fabric, video and a range of music. Now, she remarks, these elements are "all combining together in the cooking of a new evening."

After a yearlong process, Schenfeld is presenting her latest work, Angels, this week at the Suzanne Dellal's SummerDance 2009 festival and the Karmiel Dance Festival. Inventive costumes by Inbal Liblich, a video by Yuval Cohen featuring photographs from Schenfeld's childhood and family, and a variety of props fill the stage with heavenly and earthly visions. The dance's eclectic, ear-catching score includes music by Laurie Anderson, Nina Simone, Hadara Levin and Arvo Part.

The urge to create Angels struck Schenfeld after a successful run of Dance Me to the End of Love, which was set to the songs of Leonard Cohen. That evening-length dance had been a departure for Schenfeld, who was accustomed to working with longer musical compositions rather than a series of four-minute songs. She decided to keep this new structure for her next piece and found inspiration in Anderson's music. At the same time, Schenfeld recounts of her process, "movement came out without connection to the music. And later on, it [started] to build itself."

Indeed, Angels unfolded organically as the choreographer joined members of the Rina Schenfeld Dance Theater in her studio. The other dancers, most of whom had collaborated with Schenfeld before, responded creatively to her prompts for improvisation. When Schenfeld brought tall metal poles into rehearsal, she remembers, "My dancers and I, we were absolutely hypnotized by the idea to climb and do acrobatics... They couldn't stop, and I couldn't stop either!"

Perched high above the stage on these poles and wearing magnificent wings designed by Liblich, the dancers achieve a striking resemblance to angels.

Yet Angels isn't simply a dance about heavenly beings. Schenfeld explains, "It's not only angels from up above, from the sky. Angels can be people."

This is one of the essential ideas in a touching duet between Schenfeld and Hemi Goldin which forms the centerpiece of the full-length work.

Of Goldin, a 26-year-old dancer and aspiring lawyer, Schenfeld says, "Hemi is a real angel who came to my studio about two years ago, and he gives me a lot of inspiration. The fact that he's here with me, it changed my work, because for many years - 20 years, maybe more - I didn't do a dance about relationship and love... But now, when Hemi came and also something changed within me, I decided I want to talk about duets and relationships and love between 'she' and 'he.'"

Schenfeld notes that these figures of a man and a woman can also be symbolic rather than literal, and the relationships which she explores can extend beyond romance. While a lot of young choreographers often focus on the turbulence in relationships, Schenfeld asserts, "The way I do it is I think from another angle, because of my age and my experience."

And in her touching duet with Goldin, the layered relationship between the two often shifts, with each dancer serving as the other's angel. It's a theme that surfaces throughout the dance in the pairings of other dancers - and in life. "Sometimes you are my angel," reflects Schenfeld, "and sometimes I am your angel."