And the best and worst dressed nominees are...

Red Carpet Watch: Find out which stars shinned the brightest and who committed a fashion sin at the 83rd annual Academy Awards.

By KATHRYN RUBIN, LAHAV HARKOV
MARCH 1, 2011 12:42
Anne Hathaway 311
(photo credit: Reuters)
Advertisement
Honoring the top actors, actresses, directors and movies of the year, the Academy Awards is the biggest night for the film industry– there is no question about it. However, there is also no doubt that this is Hollywood’s biggest fashion event of the year – with our favorite A list starts pulling out all the stops to wow us and dazzle us. So while, we do tune in to find out who will win “Best Actor”, “Best Actress” and “Best Motion Picture” of the year, what we are really waiting in anticipation to see is what our favorite stars will be wearing; who will knock it out of the park, and who will crash and burn on the red carpet.   RELATED:
Gallery: 'King's Speech' wins big at Oscars
And the style Grammy goes to.... So without further ado here are best and the worst dressed at the 83rd annual Academy Awards...And the Best Dressed Nominees are...Topping our list for best dressed is none other than our leading lady of the night, Oscar winner Natalie Portman. The Black Swan star once again dazzled us on the red carpet, as she looked radiant in a plum colored off the shoulder Rodarte gown. The Mulleavy sisters adjusted their drapery beautifully to compliment Portman's very pregnant stomach, with the delicate chiffon fabric flowing perfectly over her baby bump and the plunging neckline drawing attention to her expectant mother glowing face. The Oscar winner complimented her dress beautifully with shoulder length retro waves (below). However, Portman wasn’t the only Black Swan start to earn a best dressed nominee – her co-star Mila Kunis, looked stunning as she graced the red carpet in a lavender Elie Saab gown. The dress incorporated many of the sheer elements that were so prominent on the fall 2011 runways, and the lavender complimented the young actress’s eyes and skin tone perfectly (below). 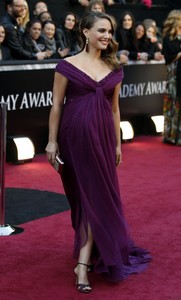 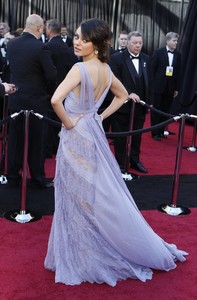 Mila KunisPresenter Reese Witherspoon, channeling Julia Roberts the year she won for Erin Brokovich, went 60s chic in a black-and-white Giorgio Armani Prive gown. Witherspoon complimented the classic streamlined look with a youthful, retro ponytail as well as a $1 million Neil Lance diamond and emerald – a definite best dressed nominee (below)! Another actress whose gown channeled old Hollywood glam was none other than Marisa Tomei. The actress, turned presenter for the night, graced the carpet in navy satin and tulle 1950 Charles James couture ball gown, which while extremely classic had enough of a funky edge to keep it interesting – earning this academy award winning star a prime sport amongst our best dressed nominees. 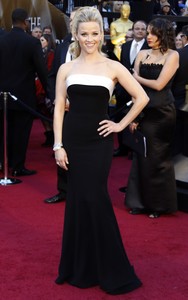 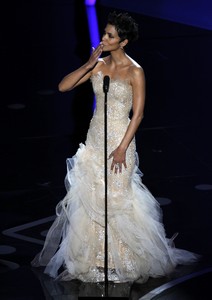 Halle BarryAs usual Halle Berry looked striking, as she captured the spotlight in strapless, cream colored, curve-hugging Marchesa gown, finished off with a dramatic train (above). But it was Winter Bone star Jennifer Lawrence who really showed us how to be va-va-voom. All eyes were on the young actress as she sported a curve-hugging classic, yet simple, red Calvin Klein frock that showed off her amazingly toned figure (below). Another leading lady in red was last year’s Best Actress winner Sandra Bullock. Gracing the red carpet in Vera Wang gown, The Blind Side star kept in simple, wearing minimal jewelery (only diamond earrings by Harry Winston) and her hair twisted back into a classic updo (below). The only downside of the dress, was the slightly over the top bow on the back.  Of course, a style salute must go out to the Blue Valentine star Michelle Williams. After winding up at the bottom of our “miss” list for the Golden Globes, William’s choice of a feminine lilac, high-neck Chanel gown has returned her to her rightful spot amongst the red carpet best dressed. 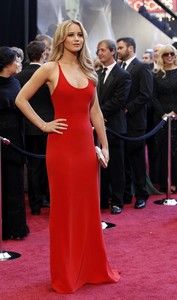 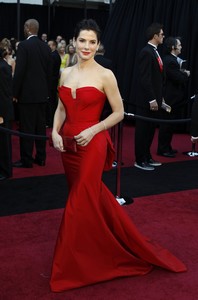 Sandra BullockAnd who can forget our hostess for the night? Anne Hathaway graced the red carpet in an eye-catching red vintage Valentino Haute couture gown, finished off with a voluminous show-stopping floral appliqué train. However, this wasn’t the only one of Hathaway’s ensembles that took our breath away. Throughout the ceremony the co-host stole the spotlight by changing a remarkable seven times. The star’s ensembles included an Versace exquisite silk burgundy silk chiffon paired with Casadei pumps, a 70s styled silver beaded tassel dress by Oscar de la Renta and a custom made Vivienne Westwood corseted Couture gown with embroidered lace and sequins, which she topped off with a Tiffany amethyst necklace and yellow sapphire diamond ring (below). 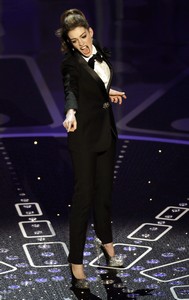 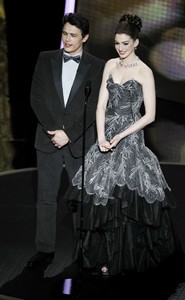 Anne HathawayOf course one of her best and most daring looks of the night, was her second ensemble – a custom made tux by Lanvin (above). Feminine heels are necessary to offset the menswear style, and Hathaway did not disappoint, as she strutted across the stage in custom Brian Atwood heels covered in Swarovski crystals. When done right, the female tuxedo is very chic and very flattering, and our hostess for the evening certainly did it right. While Anne Hathaway may not have been nominated this year, she certainly snags best Oscar for style at this year’s Academy Awards.And the Worst Dressed Nominees are...Of course while many of our favorite stars hit it out of the park, others fouled on this inning, leaving many questioning as to what they were thinking when they choose their Oscar gown. Topping our list is sadly our favorite Aussie Actress, Nicole Kidman. While the best actress nominee is usual so stylish, she has been jumping up and down award show fashion “hit and miss” lists all season. After failing to impress with her choice of attire at the Golden Globes, Kidman bounced back, stealing the spotlight away from hubby Keith Urban at the Grammy’s. However, The Rabbit Hole star’s choice for Sunday’s ceremony, a white Dior Asian-inspired gown with silver detail on the front, was extremely boxy and made Kidman look incredibly pale – sending this style icon from Down Under to the bottom on our fashion miss list (below). 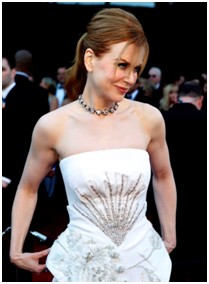 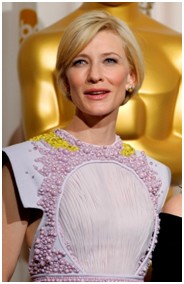 Nicole KidmanAnother regal star, who failed to impress was none other than Cate Blanchette, who chose to grace the red carpet in a Givenchy Coutour that had a striking similarity to a child’s arts and crafts project. While Blanchette is known for her risky fashion choices, the odd color combination along with the extensive beading and the unflattering circular chest on the Oscar frock, left most people confused, giving this A-list star an F on this fashion quiz (above). Actress apparently turned singer, Gwyneth Paltrow, also fell short of expectations. After crossing the red carpet in slightly too metallic shimmering silver Calvin Klein Collection dress, that bared a striking resemblance to an Oscar statue (below), Paltrow later changed into a neutral one shoulder Michal Kors gown for her performance of “Coming Home” from the film Country Strong. The second dress may have faired slightly better than the first; but the nude tone that was practically the same color as her skin, made Paltrow look incredibly washed out and just very plain - a hard feat for such a stunning actress (below). 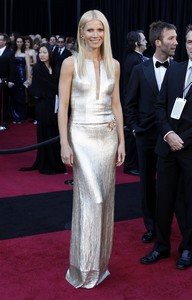 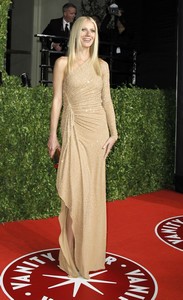 Gwyneth PaltrowMoving on to another fashion mishap – Scarlett Johansson. What happens when you mix semi-see through maroon colored lace with a high neck, you unfortunately get Johansson’s Dolce and Gabbana dress for the night. While Johansson typically brings the wow factor to the red carpet, Sunday night’s ensemble fell short, earning this belle of the ball a worst dress nominee. 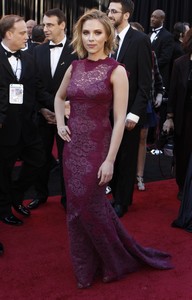 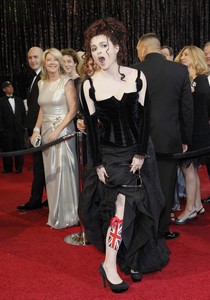 Helena Bonham CarterLast, but certainly not least, we come to best supporting actress nominee Helena Bonham Carter. As per tradition, The King’s Speech co-star, brought her own sense of style to the red carpet, and while the quirky actress’s unique flair is much appreciated, Helena Bonham Carter seemed to miss the boat on this. Gracing the red carpet in a black velvet gown, with almost torn off sleeves (created by Alice in Wonderland's custom designer Colleen Atwood) it almost seemed that she was channeling Harry Poter’s Bellatrix Lestrange rather than her nominated role of Queen Elizabeth (above); but either way, the British actress showed where her loyalties lie, as she flashed the crowd with a Union Jack garter. Whether you loved it or hated it, the best motion picture star was there after all “to celebrate the film rather than fashion.”
Advertisement
Subscribe for our daily newsletter