By YONI COHEN
Barman Ilan Ferron 311
(photo credit: Yoni Cohen)
Advertisement
Veteran bartender Ilan Ferron loves his profession so much that he has been doing it for nearly two decades – since he was 18. He thought he had seen (and drunk) it all, but when he started working at Tel Aviv’s ever-popular Nanuchka a few years ago he was sucked in to the weird and wonderful Georgian-inspired world created by owner Nana Shryer.Somewhat of a Tel Aviv institution, Nanuchka is a restaurant/bar offering Georgian food as well as a fully stocked bar. The eclectic mix of art, mismatched furniture and nooks and crannies differentiate Nanuchka from most Tel Aviv watering holes. Whether it’s a 70-year-old Georgian man who wants a taste of his beloved cuisine or young trendy Tel Avivians taking advantage of the diverse music, Ferron, along with the other eccentric staff members, guarantees that customers don’t always know what to expect. When not charming the regulars, Ferron spends his spare time either giving body massages, watching the world go by at a coffee shop or even practicing his second profession as a holistic psychotherapist. He took some time out from behind the bar to talk about who he would like to serve, why he hates it when people order soft drinks and some of the perks of the job. How did you get into bartending? 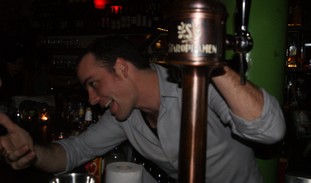 Barman Ilan Ferron (Yoni Cohen)
It was a long time ago – I am quite old now. It was 19 years ago - when I was 18. I was young and stupid and excited by the idea that people were paying for me to have fun.Where did you learn the trade?I read lots of books. Then I used other resources such as the Internet.Did you not do a course?No I didn’t. But after a while in the trade I became a teacher at a bartending school.Who is the most interesting person that you’ve ever served at the bar here?Nana.Who is Nana?The owner of the place.Why her?She’s a very colorful person, a blend of strange and intelligent with a bit of craziness thrown in. She’s a very interesting person, and she owns one of the most successful businesses in Tel Aviv. Who would be your dream customer?I’ve never thought about it actually. I don’t have anyone specific. Rabin, Gandhi maybe. The people who have a lot of stories and with a drop of a bitter drink they would divulge some extra information. What drink would you serve them? 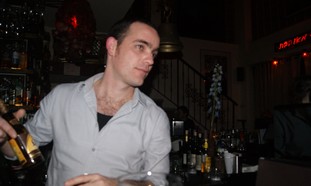 I always ask a person what mood they are in so it would depend on that. I don’t know what the ultimate drink would be. It’s the same with me - it depends on my mood. For example if I am feeling casual I would drink beer, if I am feeling romantic I would drink wine, if I my ego is up and I want to feel a little bit rough then I would drink whisky.  What is your least favorite drink to serve?Soft drinks in general.Why?Well there are people that sit at a bar and ask for a fruit juice or a coffee but I feel a bar is all about drinking, smoking and about a certain “cloudy” environment. So if you want orange juice or coca cola then sit at a coffee shop. What’s the worst thing about being a bartender?It’s a love-hate story. I love it because it pays well. If you love women then there are a lot of women. There is also good music, late hours, great stories and you get to know some amazing and interesting people. But I hate it for the same reasons because it’s hectic. It’s kind of a chaotic world. Who would be the person you would like to go out drinking with?Nana, the owner. Why?Of course I know who she is but I don’t really know her. She is like a Pandora’s Box. There’s a lot to reveal.How many people to try to hit on you in a night?[Cheeky smile and laughs all round]Can you even count? 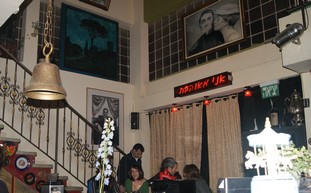 It depends how I feel. If I feel very sexy that night then I project it out. Do you have any tips for anyone who wants to become a bartender?They have to love it. They have to love people and also be a very flexible person because there’s a lot of acting in bartending. You can’t forget that you are serving people. They come to a bar to feel like kings and have a good time, so that’s the idea. You have to make them feel special and that it was worth spending every cent. 28 Lilenblum Street, Tel Aviv(03) 516-2254    Open every day from noon until the last person leaves. Reservations recommended.