Healthy Eating: Hanukka may be all about the “oil”, but you can’t make this holiday’s signature dish without the potato.

By KATHRYN RUBIN
DECEMBER 14, 2011 16:42
potatoes 311
(photo credit: MCT)
Advertisement
While oil is the central theme to the Festival of lights, what would the latke be without the potato? With more and more people switching to lower-carb eating regimes, an increasing number of people are turning their backs on this starch. Once a popular side dish, there are more negative remarks concerning the potato circulating in the air than positive ones. However, the potato is really not that bad. While it is still high in carbs (and sugar), the humble spud is not a complete dud, and may actually surprise you. So in honor of the eight days of Hanukka, here are eight miraculous health benefits of the lowly white potato: 1. Fights off the common cold
When most people think of Vitamin C, typically oranges, lemons and all the other citrus fruits come to mind. But do you ever picture the potato? Probably not – and yet, the plain white potato ranks as one of the top sources for the cold-fighting vitamin. On top of defending the body against the dreaded cold and flu, Vitamin C helps to control infections, to promote healthy teeth, gum and skin and to destroy harmful free radicals that may cause cancer and cardiovascular disease.
2. Reduces the risk of cancer 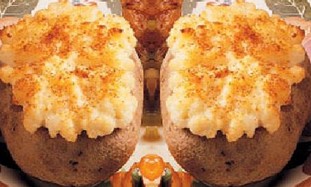 What would you say if you were told that the common white potato contains just as many, if not more, cancer fighting compounds as the number one superfood itself, broccoli? Probably not much, as you would be in shock since this seems highly unlikely. How can this white starch spud possibly be compared to the likes of broccoli? However, analysis of Red and Norkotah potatoes found that the phenolic content of potatoes rivals that of broccoli, spinach and even Brussels sprouts and can provide protection against a range of different cancers (as well  as cardiovascular disease).3. Beneficial for digestion
Now as potatoes are white, rarely do people associate them with high fiber. However, this is a misconception. A single baked potato will provide nearly 12 percent of the one’s daily-recommended intake of fiber, rivaling whole grain breads, pastas and cereals. Studies have found that diets rich in fiber support healthy digestion as well as reduce the risk of colon cancer. However, make sure to leave the skin on, as the majority of the fiber content is found in this outer layer. 4. Blood-Pressure Lowering Potential
A study conducted in the UK (at the Institute for Food Research) found that potatoes are one of the few plants to contain kukoamines, blood pressure-lowering compounds.  Moreover, potatoes are considered an excellent source of potassium, a mineral needed to regulate fluid levels in the body, nerve impulses and muscle contraction as well as support healthy blood pressure levels.
5. Decreases chance of anemia 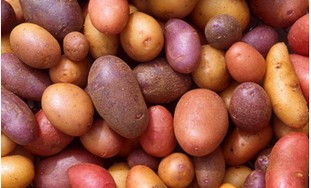 Another one of the less advertised health properties the potato is its high iron content. While many people are aware of what anemia is, most of us don't know that around 30% of Americans do not meet their daily recommended intake of iron. If the body is low in iron then fatigue, irritability and headaches may occur and if the deficiency becomes significant, it can result in anemia. While a single potato will by no means be enough to reach your daily recommended intake, it will help you get a step closer. 6. Calms stress
Apart from being a first-rate source of Vitamin C, potatoes are also regarded as an excellent source of Vitamin B6 – a B-complex vitamin required for cellular renewal and a healthy nervous system. On top of this, this vitamin is needed for the production of serotonin and dopamine – two Neurotransmitters required to regulate one’s mood. It is also required for the production of adrenaline, a hormone that helps us respond to stress,  and the production of GABA, a substance connected with a sense of relaxation. 7. Cuts risk of cardiovascular disease
Apart from enhancing one’s mood and relieving stress, Vitamin B6 also plays an important role in cardiovascular health. The vitamin is needed for methylation, a chemical process in which methyl groups are transferred from one molecule to another. Now this may seem complicated; however, what's important to know is that methylation is central to a healthy cardiovascular system as it changes potentially dangerous molecules called homocysteine into benign compounds. Homocysteine has been found to damage blood vessel walls, thereby increasing the progression of atherosclerosis (the hardening of the arterial walls). In fact, numerous studies have found a correlation between high homocysteine levels and an increased risk for heart attack and stroke. Eating foods rich in vitamin B6, such as potatoes, can help keep homocysteine levels under control. 8. Bone Protection
When you are asked what is the most important mineral for your bones, the obvious answer is calcium. Now while calcium without a doubt tops the list for proper bone formation and maintenance, manganese, found abundantly in potatoes, should not be forgotten. This trace mineral has been found to help lessen spinal bone loss in post-menopausal women. So potatoes aren’t so bad after all. Not so fast though, potatoes are good for you as long as you prepare them in a healthy way. Boiled and baked potatoes are good for you; but French fries, potato chips and unfortunately latkes are not. However, as Hanukka only happens once a year, don’t be afraid to indulge in a latke or two, just remember the rest of the year to eat the skin and skip the toppings, and always remember to bake (or microwave) and never ever fry your potatoes!
Advertisement
Subscribe for our daily newsletter