Yonah Jeremy Bob is the Jerusalem Post's intelligence, terrorism and legal analyst. He covers the Mossad, a variety of intelligence, terrorism, cyber and weapons of mass destruction issues in Israel and internationally as well as Shin Bet interrogations and indictments. Yonah is also well-connected to all of the top Israeli ministries from his former posts in the IDF, the Foreign Ministry and the Justice Ministry.

In his legal analyst capacity, he writes about war and international law, the International Criminal Court, Justice Minister Ayelet Shaked, Knesset committees and major terror, constitutional and criminal cases in the US and Israel.

Yonah has been interviewed and provided commentary for CNN, BBC, Skynews, Voice of America, Reuters, KABC Los Angeles Radio, KABC New York Radio, Russia Today and a range of other tv and radio programs. Yonah also delivers foreign affairs lectures throughout the US, Canada and Israel.

Hailing from Baltimore in the US, Yonah graduated with honors from Columbia University and Boston University Law School. He is married with three children.
Email: yonah@jpost.com
Website: http://yonahbobforeignaffairs.com/>
Follow @jeremybob1

What on earth is media bribery, and should it be a crime? – analysis

How will Netanyahu's trial look if the judges let him drag it out?

Who are the judges who will decide Netanyahu’s fate?

Netanyahu trial to open on Sunday

The trial of the century begins as Netanyahu heads to court

Will minor from Duma terror attack get prison time?

What would Biden rejoining the Iran nuke deal mean? - analysis

What would Biden rejoining the Iran nuke deal mean? - analysis

Prosecution to Netanyahu: No skipping out on first hearing of trial

Israel strikes back at Iran - the constant cyber warfare paradigm

Activists to court: 50 Muslims can pray on Temple Mount, why not 50 Jews? 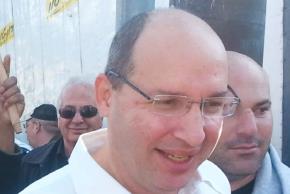 Justice Minister Nissenkorn to legal establishment: I will be your wall