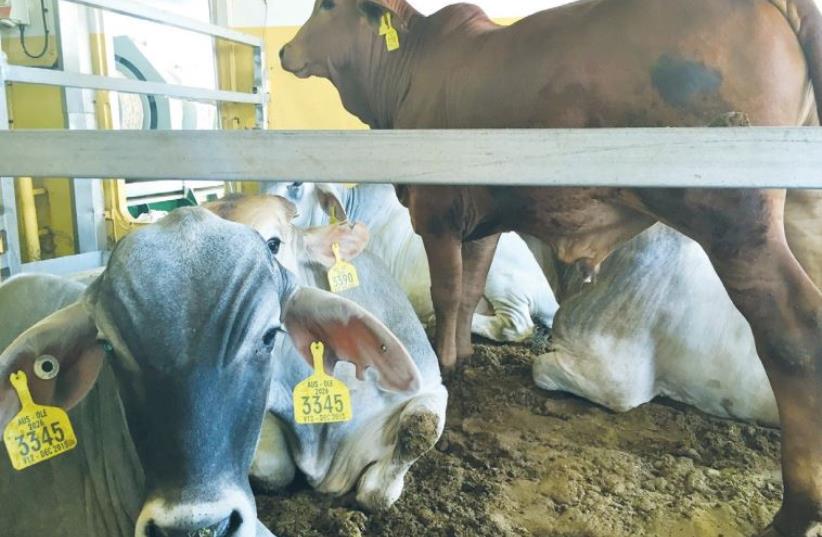 CATTLE AWAIT departure on the ‘MV Ocean Outback’ on January 6
(photo credit: AUSTRALIAN LIVESTOCK EXPORTERS’ COUNCIL)
Advertisement
Following a recent Knesset committee discussion slamming shipment of live Australian cattle and sheep to Israel, exporters from the continent argued that the four-legged passengers experience a safe overseas journey, in a conversation with The Jerusalem Post on Wednesday.On January 6, the Agriculture Ministry canceled a shipment of live cattle and sheep from Australia heading to Israel after the ship’s engine broke down on the first day of the journey, leaving 13,000 animals on board the ship for an extra week during repairs, prompting an outcry from animal rights’ activists in both countries.Alison Penfold, chief executive officer of the Australian Livestock Exporters’ Council, told the Post that contrary to claims made by animal rights’ groups, Australian livestock exporters take several steps to make the trips comfortable for animals.Penfold chalked up criticism of the live shipping practice to the industry’s former lack of transparency with the public. “The industry didn’t engage and communicate. We weren’t open to showing people what we did,” she said but emphasized that there has been a huge improvement, especially in the past five years. “Australia has made animal welfare a condition of trade,” she said, exemplified by how it closed trade with Indonesia in 2011 after serious animal welfare violations were discovered.Whereas MK Itzik Shmuli (Zionist Union) told the Knesset panel that “the animals go through an agonizing journey where many of them are injured and die during the trip,” Penfold said that the reality was “a long way from some of the suggestions,” with the most recent January-June 2015 figures from the Australian Agriculture Department showing that 99.83 percent of the 29,113 cattle that left Australia arrived safely in Israel, while 49 died during the trip.Penfold said that a similar figure for sheep showed that in that same period, 895 animals died during the journey from Australia, meaning that 99.47% of the 171,182 that embarked on the voyage arrived “fit and healthy.” Most of the livestock gain weight during shipment, and “an animal that isn’t well isn’t not going to put on weight,” she said.“It is a serious matter that animals die, because that is not our intention,” said Penfold. “We are sensitized to it. We aren’t just sitting back and saying ‘We accept that some animals will die.’” Of the livestock that died, she said the main causes were respiratory disease in cattle, and salmonella and “shy-feeding (in which an animal refuses to eat)” in sheep, which the Exporters’ Council is in the process of researching, since the exporters’ “aim is 100% delivery” of healthy animals.One solution, she noted, was a salmonella vaccine for sheep that is currently in the development process.Another way to reduce animal death during the journey is to identify shy feeder animals and figure out how to get them to eat, and to figure out why it happens in the first place.According to Penfold, the process of animal shipping is not a direct farm-to-ship process. Instead, Australian livestock go through an acclimation process at a specialized farm or feed lot. There, animals are inspected to see if they are fit for the journey and be introduced to the pellet feed available on board.As far as accommodations, she said that veterinarians are on board, along with a “hospital pen” for animals that need treatment, and animals are provided with access to water and proper ventilation. Floors are cleaned every few days and bedding replaced, she said.Noting that Israel also imports livestock from Europe, Penfold said that the continent does not have “the same standards on their boats as we do.”Upon arrival in Israel, Australian exporters continue to monitor the animals, and provide training to Israeli ritual slaughterers to make sure their practice holds up to international standards. “We as exporters are still responsible for their welfare, up to the point of slaughter,” Penfold said. “Now, Europeans aren’t doing that.”While Australian animal welfare activist advocate the export of meat rather than the animals, Penfold said that Australian exporters ship live animals because that is what their customers demand.