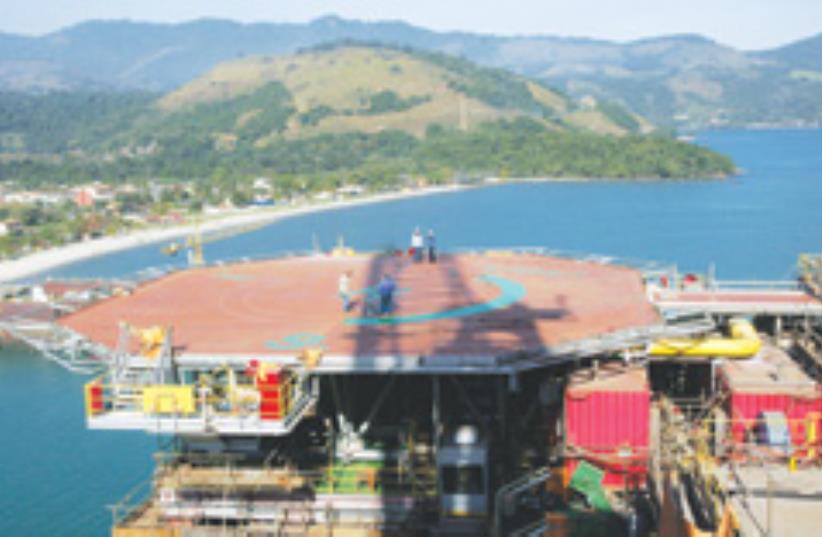 Workers walk on a Petrobras offshore-oil platform last year near Angra dos Reis, Brazil.
(photo credit: AP)
Advertisement
Brazil, long proud of its push to develop renewable energy and wean itself off oil, has a bad case of fossil-fuel fever.
An enormous offshore field in territorial waters- the biggest Western Hemisphere oil discovery in 30 years - hasBrazilians saying, "Drill, baby, drill," while environmentalists fearthe nation will take a big leap backward in its hunt for crude.
There has been virtually no public debate on the potentialenvironmental costs of retrieving the billions of barrels of oil, aproject one expert said will be as difficult as landing a man on themoon.
"The government is whipping Brazil into a euphoria that this isgoing to be a solution for all our societal problems," said SergioLeitao, director of public policies for Greenpeace Brasil. "Brazil isno longer seriously looking at alternatives."
Home to the bulk of the Amazon rain forest, Brazilfor decades has developed alternative energy as an issue of nationalsecurity following severe energy shortages in the 1970s. It useshydroelectric power for more than 80 percent of its energy needs, isthe world's largest exporter of ethanol, and nine out of every 10 carssold in the nation can run on ethanol or a combination of ethanol andgasoline.
A UN study found that in 2008, Brazil accounted for almost allof Latin America's renewable-energy investment, to the tune of $10.8billion.
But since the national oil company PetroleoBrasileiro SA, or Petrobras, discovered the massive Tupi field off thecoast of Rio de Janeiro two years ago - estimated to hold five to eightbillion barrels - it is the development of oil fields that has goneinto overdrive.
Thirty years ago, more than 85% of Brazil's oil came from foreign sources. Today, it is a net exporter.
There have been a series of other discoveries since Tupi - eachlying at least 185 kilometers offshore, more than 1.6 km. below theocean's surface and under another 4 km. of earth and salt. Estimates ofthe entire area's recoverable oil range between 50 billion and 100billion barrels.
Brazilian President Luiz Inacio Lula da Silva hailed the findsas the nation's future, a second declaration of independence and aneconomic savior for 57 million Brazilians living in poverty - 30% ofthe population. The military wants new submarines and jets to protectthe crude. Leftist groups want it all nationalized.
The enthusiasm is also fanned by Brazil's devotion toPetrobras, routinely listed as one of the most-admired companies innational polls.
Founded in 1953 to fend off an economic crisis and dependencyon foreign oil, Petrobras has long embodied Brazilian nationalism andthe notion of shielding domestic wealth from foreigners - particularlythe United States and Europe.
In 2008, Brazil's total oil and natural-gas production wasnearly 2.3 million barrels per day. Petrobras was responsible for morethan 96% of it.
"Most Brazilians think of Petrobras like they think of theirsoccer stars," said Eric Smith, an offshore oil expert at TulaneUniversity in New Orleans, who likened efforts to get at Brazil's oilto a trip to the moon. "Try to find Americans who support Exxon likethat."
Petrobras fattens government coffers with more than $30b. a year in taxes and royalties.
The company is led by Sergio Gabrielli, a bearded economicsprofessor-on-leave, who was jailed under the nation's military regimefor his political activities. He defends the company's environmentalrecord emphatically.
"Our ethanol program, our biodiesel program is still there.Petrobras is allocating $2.8 billion to develop our infrastructure andproduction capacity for producing ethanol and biodiesel," Gabriellitold The Associated Press at an economic forum in Rio this spring.
The company's record is not untarnished, however.
In January 2000, a pipeline spilled about 350,000 gallons ofcrude into Rio's Guanabara Bay. Six months later, there was a spill ata refinery near Curitiba in Brazil's South - one million gallons of oilflooded two rivers. In March 2001, explosions on what was then thecompany's biggest offshore platform killed 11 workers. The rig sank,releasing more than 300,000 gallons of oil.
Petrobras quickly initiated a $4b. investment program toprevent future disasters, and Gabrielli says Petrobras can safelydevelop the difficult offshore fields.
Judy Dugan, a founder of OilWatchdog.org, cautions Brazilians against embracing an oil company as a national benefactor.
She said the track record of global oil companies shows none"truly have the good of the citizenry first in mind. The oil businesscreates corruption in many governments and large sources of politicalinfluence for an oil company's benefit, not for the benefit ofcitizens."
Brazil's Senate recently opened an inquiry into corruption atPetrobras. Opposition lawmakers say the company failed to pay more than$2b. in taxes and that it overpays firms with ties to the Silvaadministration.
Silva swears Brazil will not go the way of a Venezuela or Nigeria, where petro dollars routinely mix with politics.
Instead, he is pushing a version of the Norwegian model, workingto set up a government-controlled oil fund for social projects that heargues would operate with transparency. The opposition, however, fearsgiving the central government control of such a fund would give itmassive new political influence.
Leitao, of Greenpeace, wonders if the billions of dollarsneeded to develop the offshore finds will be worth it should the priceof oil fall.
"At the beginning of the 20th century, we were the largestproducers of rubber in the world. People were lighting cigars withmoney," he said. "But the hangover came quickly because the Englishstarted producing rubber in Asia. The prices fell and our fortunesended.
"We're not looking at the lessons our own history has given us."
Advertisement
Subscribe for our daily newsletter