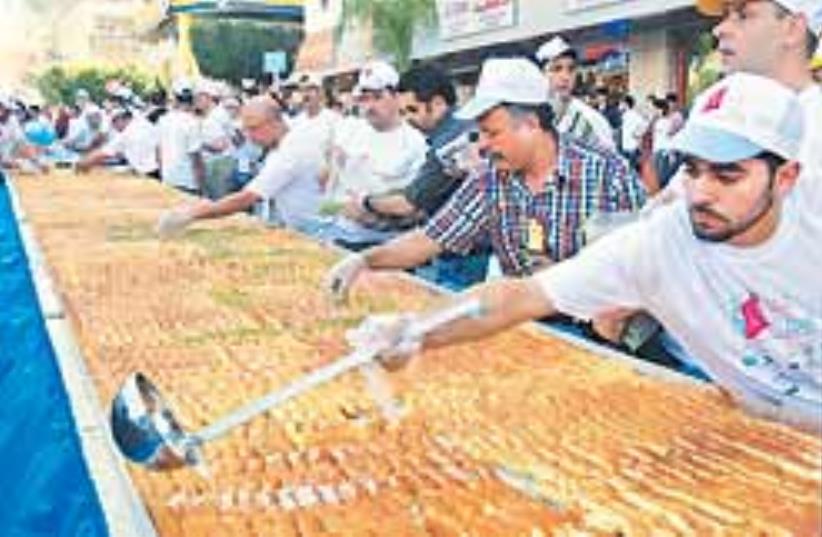 Life in the West Bank - in sharp contrast to beaten down, Hamas-ruled Gaza - has taken on a semblance of normalcy.

Exhausted after more than two decades of on-and-off conflictwith Israel and deeply skeptical about prospects of statehood,Palestinians here are increasingly trying to carve out their own littleniches of happiness.

"We need to enjoy our life despite all the difficulties," saidhousewife Nadia Aweida, in her 50s, after taking in a dance show inRamallah.

It would appear that the West Bank, under US-backedPalestinian Authority President Mahmoud Abbas, has finally made firststeps toward the stability that the international community has triedto foster with massive foreign aid and training for PA security forces.

But the hopeful signs come with many qualifiers.

While Israel has removed several West Bankcheckpoints, other obstacles still limit Palestinian mobility to halfthe territory. The economy is no longer in free fall, but is stillshrinking, according to the World Bank. Whatever prosperity there isdepends mainly on foreign aid.

Meanwhile, Abbas remains locked in a power struggle with Hamas;the Gaza Strip, which has been under an Israeli- and Egyptian-imposedblockade for two years, is growing steadily poorer.

With unemployment widespread, many Palestinians still strugglejust to get by. But those with a little cash in their pockets,including people with steady government jobs, say they're tired ofwaiting for the comforts of a world they can only see on the Internetand TV.

Palestinian companies in Ramallah sponsored a pickup basketballtournament with a first prize of $2,500. A festival at Ramallah'sPalace of Culture featured dance and music groups from Turkey, Germanyand France and had sellout crowds.

The next night, an Iraqi singer had hundreds swaying to his music at an outdoor performance.

"This is new in our life and we deserve to live like theothers," said audience member Maher Saleh, 29, who works for anadvertising agency.

An internationally supported law-and-order campaign by Abbashas been critical to the changed atmosphere. He started cracking downtwo years ago after the PA lost Gaza to Hamas.

After the second intifada broke out in 2000, vigilante gunmenruled and security forces were largely powerless. Even regular peopletook it as license to ignore such basics as paying utility bills.

Now they're even being made to wear seat belts while driving.Police are visible in the streets, the vigilantes have turned overtheir weapons and Hamas operatives - the main opponents of thegovernment - have gone underground.

While Islamists have deepened their hold on Gaza, there aresigns that in the West bank, the traditionally secular nature ofPalestinian society, which receded during troubled times, is beginningto reassert itself.

The outside world has come closer in other, unexpected ways:China has led the way in swamping the West Bank with foreign goods, andPersian Gulf firms plan to build large housing complexes.

The new feeling of safety has encouraged some Palestinians toinvest, particularly in the former terrorist strongholds of Nablus andJenin, though most business people still hedge their bets.

In Nablus, cinemas were shut down by uprising activists in thelate 1980s, and when one briefly reopened in 2006, militants shut it atgunpoint, saying it was inappropriate to have fun at a time of nationalstruggle.

But now the 175-seat Cinema City, built for $2 million in a new10-story commercial high-rise, is showing four films a day, mainlyEgyptian dramas and comedies but also Hollywood fare like Transformers.

A former Nablus terrorist, Mahdi Abu Ghazaleh, embodies thechange. Once a member of the Aksa Martyrs Brigades, he has won amnestyfrom Israel, like many of his cohorts. He got married this month andnow works in the family wholesale business, selling leather goods andplastics.

In Jenin, the flagship of change is Herbawi home furnishings, aseven-story tribute to consumerism with gleaming floors and carefullyarranged displays. A world away from the West Bank's typicalmom-and-pop stores, it carries Krupps espresso machines, along withfurniture imported from Malaysia and Turkey.

Durgham Zakarneh, 32, makes only makes $600 a month as a civilservant, but he has managed to buy a refrigerator for $400 in 11monthly payments. "Life is much better now," he said. "People can dobusiness without worrying."

Other Herbawi stores will open soon in other West Bank cities,said Ziad Turabi, manager of the fledgling chain. Like the Nabluscinema manager, Turabi said he wouldn't have made the $4m. investmentin Jenin without the new sense of security, provided in part bydisciplined police freshly trained in neighboring Jordan in aUS-sponsored program.

However, Israeli checkpoints still put a damper on thebusiness. The separation barrier, built to keep out suicide bombers,cuts off the Herbawi store in Jenin from a valued clientele - IsraeliArabs. Israel doesn't allow its citizens to drive through the barriercrossing closest to Jenin, so they have to detour several kilometers toget to Herbawi's.

Even so, there's more freedom of movement. The Hawara roadblockoutside Nablus used to be the West Bank's worst bottleneck, allowingPalestinians to cross only on foot after long waits. Now, for the firsttime since 2000, they can drive through.

The IDF has loosened the other checkpoints aroundthe city, and large crowds are expected at the city's monthlongshopping festival, which featured an attempt to get into the GuinnessBook of World Records with a city-block-length tray of kunafa, asweet-and-sour pastry.

Saleh, the ad agency employee, said he's ready to have a good time after years of gloom.

"We had an uprising, we had hardship under occupation," he said. "We need singing and joy. We need to live a human life."