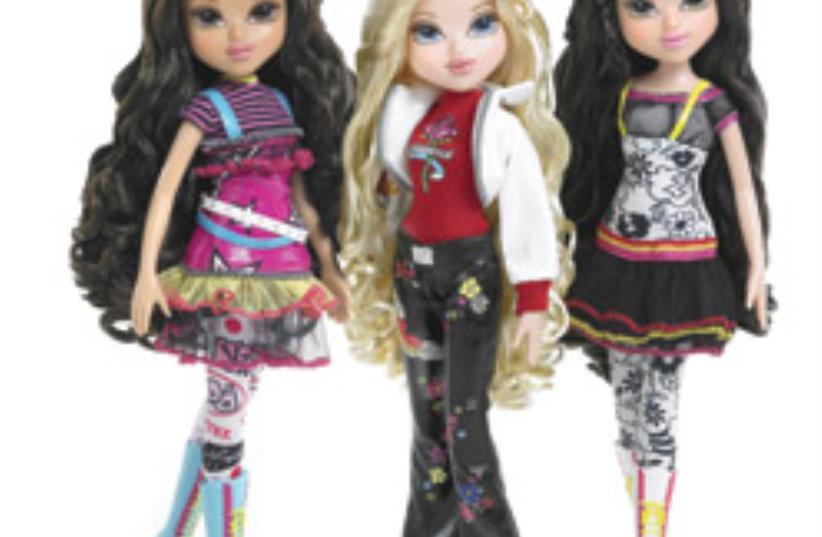 Moxie Girlz has more modest apparel and figures th
(photo credit: AP)
Advertisement
MGA Entertainment Inc. is going to need to musterall the moxie it has for its latest launch. MGA is rolling out a newline of dolls called Moxie Girlz as Mattel Inc. plans to take overMGA's former marquee product, the saucy Bratz dolls, following afour-year legal struggle.
With more-modest apparel and figures than Bratz,you can think of Moxie Girlz as Bratz lite, and MGA is banking on theline to keep it afloat.
MGA Entertainment began developing Moxie Girlz, targeted atgirls ages six to 10, last year. The line was inspired by the recessionand the changes in families' lifestyles that came up in focus-groupdiscussions, says Paula Garcia, vice president of product design anddevelopment.
"We wanted to make the doll a reflection of the consumerherself, not lavish, expensive, material things," she said. "Thefashion is 'everyday' fashion as opposed to very lavish fashions."
Early sales of Moxie Girlz, which started appearingin some Target and Wal-Mart stores on July 22 and will be availablenationwide August 15, have been "very good," MGA CEO Isaac Larian said.A TV, print, radio and online ad campaign starts in September.
The dolls have a subtler look than the pouty-lipped Bratz, whohave drawn fire for their skimpy clothing. And the new look is key,said BMO Capital Markets analyst Gerrick Johnson.
"I think they're adorable," he said. "Barbie looks like a model, Bratz look like tramps and Moxie Girlz look like girls."
The success of the line is crucial to Los Angeles-based MGA. AUS District Court ordered MGA to transition the Bratz doll line toBarbie maker Mattel by spring, concluding a lawsuit in which ElSegundo, California-based Mattel alleged Bratz designer Carter Bryantdeveloped the concept while at Mattel. A jury last year awarded Mattel$100 million in damages for copyright infringement and breach ofcontract. MGA is appealing, and a mediator is working with the parties.
Though MGA also makes Little Tikes, Rescue Pets and Lil Angelz,among other toys, Bratz was by far its biggest seller. Johnsonestimates sales of Bratz peaked in 2005 at $750m. and have fallensince, perhaps below $200m. in 2009. The privately held company doesnot publish its revenue.
Moxie Girlz come in several different styles: "Jammaz" - inpajamas - come with a guitar and a microphone; "Art-titude" come withshoes and a bike you can draw on; and "Magic Hair" come with two setsof hair. They cost $17.99 to $29.99 each; accessories include a car anda salon play set.
The toy industry's doll segment has been in decline for a fewyears as more girls find entertainment online and in tech gadgets. Dollsales overall fell 10 percent to $2.68 billion in 2008, according tomarket-research firm NPD Group. And sales of Barbie, the segment'sleader, slipped 15% in the second quarter compared with a year earlier,though the decline was driven in part by the recession.
New doll lines could boost the category, Johnson said. BesidesMoxie Girlz, new entries include Liv dolls, which Spin Masterintroduced Saturday. They look similar to Moxie Girlz and sell for$19.99.
"There is tremendous opportunity in the girl segment forsomething new, interesting and compelling," Johnson said. "Kids can befickle. This could be the thing the girls' business needed."
Advertisement
Subscribe for our daily newsletter