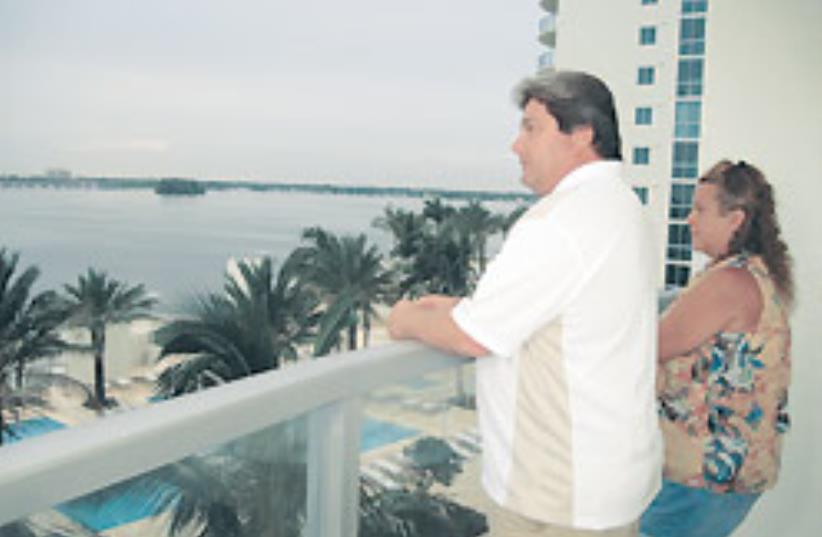 Victor and Cathy Vangelakos look out from their ba
(photo credit: AP)
Advertisement
The Vangelakoses' southwest Florida condominium hasmarble floors, a large pool overlooking a river and modern furnishingsthat speak of affluence and luxury. What they don't have in the32-story building is a single neighbor.
The family of five from the northeast state ofNew Jersey purchased their unit four years ago, when Fort Myers was inthe midst of a housing boom and any hints of an impending financialcrisis were buried in lofty dreams of expansion and development. Theymade a $10,000 down payment and eagerly watched as builders transformedan empty lot into an opulent high-rise, one that now symbolizes theforeclosure crisis.
"The future was going to be southwest Florida," said VictorVangelakos, 45, a fire captain who planned to retire eventually andlive permanently in the condo.
Most of the other tenants in the 200-unit condo didn't close ontheir contracts, and the few who did have transferred to an adjacentbuilding owned by the same company because more people live there.
The Vangelakoses' mortgage lender will not allow them to do the same.
That leaves them as the sole residents of the Oasis Tower One.
"It's a beautiful building," said their attorney,John Ewing, who is representing 27 others who made deposits on units."The problem is, it's a very lonely building."
When the Vangelakoses travel from Weehawken, New Jersey, justacross the Hudson River from New York City, to spend a week or a fewdays in their Florida home, they have exclusive use of the pool, gameroom and gym, but they miss having a few tenants around.
"Being from the city, it's very eerie," Vangelakos said. "It's almost like a scary movie."
A large, circular fountain in front of the building is dry. Theautomatic glass doors that lead to the front lobby are locked. On thefront desk is a guest sign-in sheet. The last entry: February 13, 2009.
"It's like time froze here six months ago," Ewing said.
Vangelakos said they closed on the apartment in the autumn,unaware the other tenants had failed to follow through. When theyvisited around Christmas, they didn't think much of the emptiness. Theywere just happy to be there.
"We wanted to believe," Cathy Vangelakos said. "We were looking for what we were offered."
On subsequent visits, however, the building grew more deserted.
The lights on the pool and palm trees were off. Their garbagechute was sealed, a trash bin placed in front of their unit instead.
Despite the empty units, they faithfully parked in theirassigned spot on the second story of the parking garage. Then thoselights went off, too.
Then there were security concerns. One night, someone poundedon their door at 11 p.m. They called the front desk at the next doorbuilding, which contacted police. A search turned up no one, though apool entrance was open.
Another morning they awoke to find lounge chairs in the pool.
The parents and their children sleep with their cellphones by their beds.
"I'm not a chicken, but this is a big building," Cathy Vangelakos said.
Betsy McCoy, vice president and associated general counsel withThe Related Group, which sold the family their unit, said they havetried to help find a solution - even offering them a unit in thebuilding next door, free of cost, while the situation is resolved.
"They haven't wanted to take us up on that," she said. "Theyfrankly rejected every solution and offer and proposal that we've comeup with."
McCoy said some of the interested buyers who put down depositshad lost their jobs, others were unable to get mortgages and some werejust nervous when the financial collapse came.
The Cape Coral-Fort Myers metropolitan area in Lee County hassome of the worst economic stress - a combination of foreclosures,unemployment and bankruptcies - in the country, according to TheAssociated Press's monthly analysis of more than 3,100 US counties.
The latest AP Economic Stress Index, which assigns each countya score from 1 to 100, with higher numbers reflecting the greateststress from the recession, found Lee County had a score of more than20. Anything above 11 is considered stressed.
Victor Vangelakos said they don't want to move to the towernext door because they would still be paying the mortgage andmaintenance costs on the condo they own. They paid $430,000 for theunit and took out a $336,000 mortgage - essentially spending their lifesavings.
He'd like for The Related Group to buy them out.
"They want us to be refugees in Tower II," Victor Vangelakos said. "That's not how I expected us to live here."
The family's attorney said he has filed two lawsuits on behalfof would-be tenants because the building wasn't finished as promised.He said they expected a clubhouse, marina, private cinema andrestaurants.
McCoy said those amenities could be developed, but were never promised.
On Friday evening, the pool area was dark, most of the doors locked.
Cathy Vangelakos and her 19-year-old daughter, Amanda, steppedinto an elevator to head up to their unit. "Going up," an automatedvoice chimed.
"Going up," Cathy Vangelakos said. "That's all we hear."
Advertisement
Subscribe for our daily newsletter