Lebanese soldiers who helped Israel still struggle to get by

By Sharon Wrobel , THE JERUSALEM POST
JANUARY 16, 2010 18:36
jobseekers 88 248
(photo credit: Ariel Jerozolimski)
Advertisement
The Industry, Trade and Labor Ministry has issued a tender for theestablishment of an employment and training center for South LebanonArmy veterans. It hopes to provide job opportunities and raise thestandard of living for Israel's former allies. 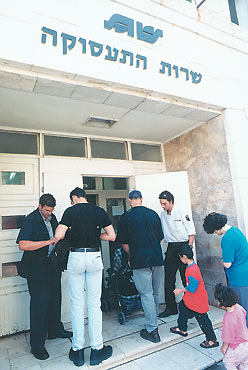 "The aim of the center is help former SLA soldiers to join thelabor force and attain economic independence," said Benny Pfefferman,head of the research and economics division at the Industry, Trade andLabor Ministry. "The training and employment center will be a onestopcenter concentrating various services under one roof."
SLA veterans face obstacles that make it difficult to integrateinto Israeli society, he said. The aim of the center is to help themand their families, especially women, the disabled and the elderly. Italso will help them with housing problems through financing assistancefor rentals, Pfefferman said.
The deadline for the receipt of tenders is the beginning of this March.
The South Lebanon Army, a Christian militia, was allied withIsrael from 1982-2000 in its fight against Hizbullah and other armedgroups. When Israel pulled its forces out of Lebanon in May 2000, thelives of SLA fighters and their families were endangered due to theircooperation with Israel.
Some of them moved to Israel, while others relocated to othercountries. Upon arriving in Israel, many of the families encounteredvarious hardships, including high unemployment and poor livingconditions.
For years, SLA veterans have felt they have been neglected andare frustrated over government promises to help them. In 2002, thegovernment decided to split the care of SLA veterans between theDefense Ministry and the Immigrant Absorption Ministry.
In 2006, the Knesset Finance Committee approved the payment ofNIS 40,000 per family to SLA veterans, expressing the state'sappreciation for their service to Israel.
Today, 2,541 SLA veterans and their family members live inIsrael. The community consists of 670 households, out of which 469, or70 percent, are under the care of the Immigration Absorption Ministry.
Seventy-five percent (1,213) of SLA veterans and their familymembers live in the vicinity of Netanya (476), Kiryat Shmona (262),Tiberias (217), Ma'alot-Tarshiha ( 139) and Haifa (119). About 150 SLAfamilies are being helped by the social welfare system.