By NADAV SHEMER, LAHAV HARKOV
Netanyahu Steinitz 390
(photo credit: Reuters)
Advertisement
The Knesset approved the government’s multi-billion-shekel tax-hike package Monday – after Prime Minister Binyamin Netanyahu agreed not to impose an increase on middle-income earners.The Bill to Shrink the Deficit and Deal with the Repercussions of the International Economic Crisis passed its second and third – meaning final – Knesset readings, with 28 in favor and 16 opposed.The bill underwent an accelerated legislative process, passing through the Knesset House Committee in the morning and a first plenum reading in the afternoon, followed by two Knesset Finance Committee review meetings before becoming law in the evening.The Value Added Tax will rise by one percentage point to 17 percent on September 1.Starting January 1, all income between NIS 14,001 and 41,830 per month will be taxed an extra 1% and all income above NIS 67,000 will be taxed an extra 2%, while the green tax, the purchase tax on investment apartments, and employer contributions to the National Insurance Institute will all be updated.An estimated 421,000 workers escaped the salary surtax after Netanyahu and Finance Minister Yuval Steinitz reached a last-minute agreement with Knesset Labor, Welfare and Health Committee chairman Haim Katz to eliminate the 1% increase for the NIS 8,881-14,000 bracket.The three agreed to adjust the second, third and fourth income brackets so that earnings will be taxed as follows: less than NIS 5,200 per month, 10%; NIS 5,201-8,880, 14%; NIS 8,881-NIS 14,000, 21%; NIS 14,001-20,000, 31%; NIS 20,001-41,830, 34%; NIS 41,830 and above, 48%.The government agreed to Knesset Finance Committee chairman Moshe Gafni’s request to exclude one-time earnings such as severance pay, pension income or proceeds from savings or asset sales from the 2% high-earners surtax. One-time payments will be treated as if they were delivered over a six-year period, ensuring that they do not cross the surtax threshold of NIS 800,000 per year.The Knesset, in an emergency meeting during the summer recess, also approved the first reading of an amendment to the Encouragement of Capital Investments Law, which changes the tax rates on an estimated NIS 120 billion in “trapped profits” accrued by multinational corporations.The law currently exempts the corporations from certain taxes as long as they invest their profits in further activities in Israel.Defending the new taxes in the plenum, Steinitz echoed a statement made by Netanyahu earlier on Monday: “Just like in matters of security, when it comes to the economy we cannot rely on anyone but ourselves – and, of course, our Father in the Heavens,” he said.“We do not have a security net of hundreds of millions of dollars in case there is an economic and financial crisis and our credit rating is lowered,” the finance minister explained. “Since we cannot rely on anyone in economic matters, we have, for the past four years, been fighting to defend the Israeli economy, and we are committed to responsibility and seriousness.”Labor leader Shelly Yechimovich slammed Steinitz and Netanyahu, saying they consistently “take a little from those who have a lot, and a lot from those who have little.”According to Yechimovich, a fair tax would redistribute wealth to a degree by imposing high taxes on the wealthy and little to no taxes on the poor. The deficit grew because of Netanyahu’s tax reforms, which he continued even though experts told him it would not work, she added. 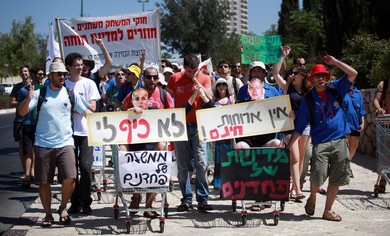 “This government serves haredim, settlers and the rich,” Meretz leader Zehava Gal-On asserted. “Stop giving tax exemptions to tycoons and giant corporations. Stop giving gifts of tens of millions to those with connections.”While MKs discussed the new economic policies, Hano’ar Ha’oved Vehalomed Labor youth movement, the Forum for Social Justice and other groups protested outside the Knesset, pushing empty shopping carts meant to represent citizens’ inability to purchase basic necessities.The protesters called for MKs to vote against the new tax and budget cuts, abolish poverty and expand budgets “for the good of all Israeli citizens,” the protest leaders stated.Pesach Hausafter of the Forum for Social Justice lamented the budget cuts, which “target the middle class and the weaker sectors.With arrogance and audacity, the prime minister decreed against those who have already made cuts in all aspects of their lives and made them unable to live with dignity in this land.”
For a table showing how much income tax people can expect to pay from January 1 next year, compared to what they pay now, click here.
Advertisement
Subscribe for our daily newsletter