Finance Minister Yuval Steinitz has said the ministry was working on its own package of measures aimed at cooling down the surge in property prices, 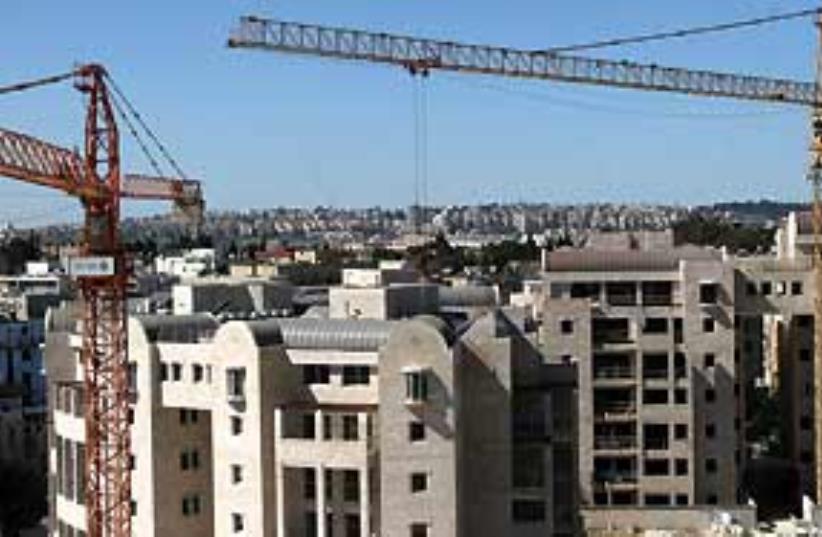 building311
(photo credit: Ariel Jerozolimski)
Advertisement
The sharp surge in property prices may be ending as supply in new housing increased in September while sales remained high, Bank Leumi said in a report Thursday.“There are indications that we are at the beginning of a process that will eventually stem and end the surge in property prices,” Bank Leumi economist Eyal Raz said in the report. “In September, the amount of supply of housing for sale returned to a level of a year ago.”During September, 1,443 new homes in private construction were sold, according to the latest figures published by the Central Bureau of Statistics.“This is a very high monthly volume and the largest number of sales in a year, which points to high demand for new homes following the trend in recent months,” Raz said. “But at the same time, the supply of new homes available for sale stood at 10,242 in September, representing an increase of 5 percent compared with the previous month and the same month last year.”The combination of a rise in newhome sales and the increase in available housing for sale pointed to a stable figure in the “monthly supply” measure of 7.3, which is the ratio between the number of available homes for sale at the end of a month and the volume of sales during the month, he said.The main area in which an increase in the supply of housing was reported in September compared with August was in the center of the country including Tel Aviv, which accounts for almost 40% of housing supply in the market.From the beginning of the year the supply of available housing for sale increased only moderately following a decline in the past few years, the report said.“Therefore, the supply of housing needs to be boosted over a prolonged period of time for property prices to come down,” Raz said.The Bank of Israel warned Wednesday that the rapid 20 percent increase in property prices is unsustainable and urged policy makers to implement measures to increase the supply in housing. Since 2008 to this August, property prices in real terms have risen by 33%, according to the Central Bureau of Statistics.Separately, a survey published by the Construction and Housing Ministry this week showed that property prices are rising at a faster pace than the consumer- price index, while the number of salaries needed to purchase an apartment is increasing proportionally. The ministry said the current situation in the real-estate market required government assistance in buying a property.Preferred assistance should be provided to the purchase of housing in the periphery and to weak segments of the population in the center of the country who are not able to buy an apartment, the ministry’s report said.

Until now, the Finance Ministry has opposed considering measures that would offer government assistance.Instead, Finance Minister Yuval Steinitz has said the ministry was working on its own package of measures aimed at cooling down the surge in property prices, and they are expected to be presented in the coming weeks.One of the measures the Treasury is said to be considering is to increase the purchase tax on the buying of a second apartment or on the purchase of apartments for investment purposes, in addition to taking steps to boost the supply of housing.