The latest intel on Intel

Decrease of exports is temporary and Israel is still a center of innovation, says General manager of Intel Israel.

By JUAN DE LA ROCA
SEPTEMBER 19, 2012 15:06
Maxine Fassberg
(photo credit: Courtesy Intel Israel)
Advertisement
Science-oriented industry is one of the pillars of the local economy. In 2011, exports from this industry amounted to more than 45 percent of the total export of goods. These industries are also considered an engine of growth.Consequently, the future of the industry is of prime importance to the local economy. The decrease in exports and the difficulty in raising funds to finance the industry is raising concern .But is this a passing phase influenced by a combination of the current global downturn and the business cycle or are there deeper reasons? To find the answers to these questions, The Economic Post interviewed Maxine Fassberg, general manager of Intel Israel and VP of Intel’s Technology & Manufacturing Group.“Currently, the hi-tech industry is going through a period that cannot be described as easy,” says Fassberg. “The origin of the problem stems from the fact that the science-based industry is export oriented and dependent on overseas finance. In my opinion, it is a temporary problem because the essentials are excellent. Israel is still a center of innovation, and our developers have fascinating ideas.And that is what counts. 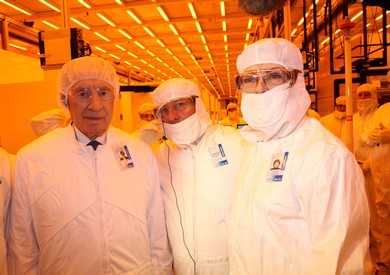 Shimon Peres visiting Intel (Sivan Farag)The current problems are imported. Demand in our hi-tech markets has declined because the EU, which accounts for one-third of our exports, is in the midst of an economic crisis. The US is in better shape, but its recovery from its own crisis is slow.The Far East, which is considered the world's early adopters, has its problems. China has a strong GDP growth, but it is low compared to its performance in the past.The same holds true for raising money to finance the hi-tech industries, and especially start-ups. The world is strapped for money. It is not only local VC funds that are feeling the pinch; it is also the VC funds in the US and Europe,” she says.“But this, in my opinion, is a passing phase and, consequently, I believe that we should invest in this downturn,” she is quick to add. “A downturn is followed by an upturn, By investing when the business cycle is at the trough, one can reap the benefits when the cycle reaches its peak.”Most executives of science-oriented companies complain that there is a shortage of personnel. Do you agree? I wouldn’t say there is a shortage of engineers, but there is a shortage of technicians. This is an endemic problem for the local economy as a whole. The education system produces doctors, engineers, biologists, etc. But it does not produce carpenters, metal workers, plumbers, printers, etc., nor does it produce the much-needed technicians for the hi-tech industry – i.e., people who have two-year degrees in electronics, robotics, mechanical engineering and so forth.For us -- a hi-tech company that does both development work and production work -- this shortage of technicians is a big problem. Up to a couple of years ago, technicians were trained in colleges. Then these institutions decided to upgrade themselves by training engineers and giving BSCs. So now we have a situation in which we have more engineers than we need and much fewer technicians. I would like to add that generally, engineers who graduate from college are not on a par with engineers who graduate from university.A production company like ours, which is totally automated and operates production machinery that costs tens of millions of dollars, requires skilled operators, technicians. And at these times, they are not found so easily. When we hire staff, we hire the best. This means that in most cases, we hire engineers who are university graduates.

How do you overcome this problem? We have come to an exclusive agreement with one of the colleges by which they train -- about 40 to 50 technicians a year -- according to our specifications. Intel is not the only organization that has such a system. The Israel Aircraft Industry, Teva. Rafael and the armed forces all have similar technicians training facilities.The Education Ministry is keen to reintroduce technical schools where the youngsters can learn a trade. Such an education system can do wonders for what are termed low-tech industries, which at these times are losing out to low-salaried countries. These new highly trained young people can then upgrade these industries by using hi-tech machinery, which can reduce production costs, produce better-quality products and thereby compete with inexpensive products from the Far East and Eastern Europe.You have a very good record of hiring Arabs and haredim, who are generally not very well integrated in the workforce.Yes, I am very proud of our record in that particular area. And let me tell you that we do not lower our recruitment standards for anyone. But we do not discriminate! We believe that by recruiting from 100% of the population, we get the best results.And that includes minorities of all kinds, including women. We recruit the best and give them our best. Intel has an excellent record as an employer.We have been voted the best workplace in Israel year after year. We invest in our workforce, and it pays off. We are an efficient operation because a satisfied workforce gives good results.Please tell me something about Intel operations in Israel.We started operations in Israel in 1975 with four employees doing research work. Now, 37 years on, we have over 8.100 employees: 4,000 in Haifa mostly doing research work; 1,500 in Jerusalem (doing R&D and die-prep facility); and 3,100 in Kiryat Gat doing production work. We are considered one of the best FABs (wafer production facilities) in Israel. And since Intel is considered the best and most efficient producer of wafers in the world, I believe that in our field we are among the best, if not the best, in the world. 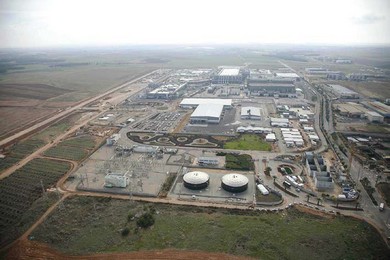 Intel Kiryat Gat (Sivan Farag)Intel has one of the largest hi-tech operations in the country and has an important bearing on the development of Israel as an important and innovative global hi-tech center. Intel Israel is considered to be the largest private employer in the country today, with employees in its development and production facilities in Haifa, Jerusalem, Kiryat Gat, Petah Tikva and Yakum. It began operating in Israel in 1974 with four employees. Although 2012 was a challenging year in which Intel strove to achieve its technological and business goals, the company increased its staff with 1,400 employees, and 600 new positions are expected to open in 2012. intel employees come from all sectors of Israeli society, including secular and Orthodox Jews, Arabs and Druse.The company contributes to the Israeli economy in many ways. In addition to employing 8,100 people, it indirectly impacts the employment of 23,000 workers in Israel. In 2011 alone, Intel Israel exported goods worth $2.2 billion and made $628 million of reciprocal procurements from Israeli suppliers. Over the past five years, Intel Israel contributed more than $4.1 billion to the development of the local economy as part of its Industrial Development Plan.The company’s development centers spearhead Intel’s product development worldwide and are focused on Intel’s areas of growth: processors, platforms, software and services. In 2011, Intel experienced the unprecedented success of the Sandy Bridge processor. The processor, developed in Intel’s Haifa and Yakum development centers, was the fastest-selling processor in Intel’s history.In 2012 Intel started to manufacture the Ivy Bridge processor, which was also developed partly in Haifa.Intel Israel’s manufacturing plants leverage Intel’s most innovative technologies. During 2011, Fab28 in Kiryat Gat was upgraded to 22nm technology.The upgrade was a vote of confidence in Intel Israel’s contribution to the Intel Corporation and the State of Israel. IDPJ, the international die prep facility in Jerusalem, doubled its payroll in 2011 and introduced new technologies that support the entire product line of the Intel Corporation.Intel in Kiryat Gat began operations in 1999, manufacturing processors using 0.18-micron technology. In 2008, Intel opened its second Kiryat Gat plant, called Fab 28.F28 is a high-volume manufacturing Fab, (Semiconductor Fabrication Plant) which runs wafers on a 22 nano meter process technology.The Fab manufactures products across all of Intel segments, including servers, workstations, mobile computers, desktops and Intel Atom processors aimed at mobile devices.
Advertisement
Subscribe for our daily newsletter