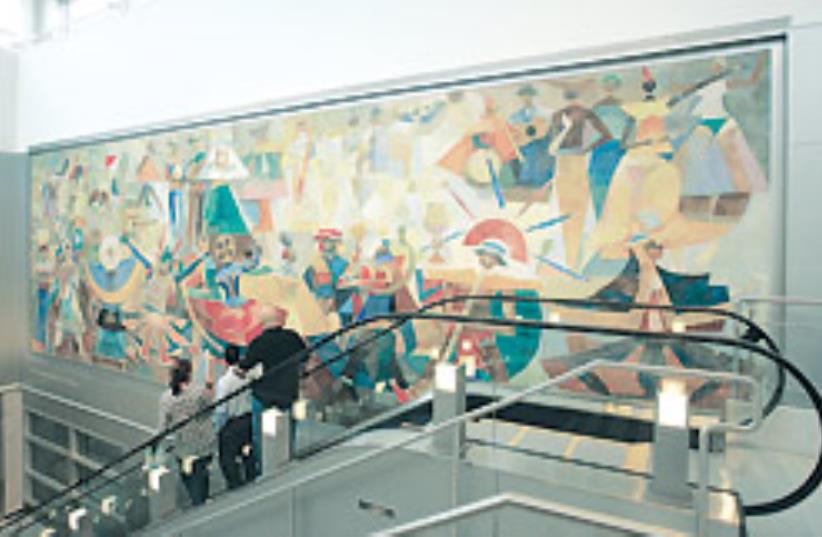 THE MURAL 'Rejoicing and Festival of the Americas'
(photo credit: AP)
Advertisement
In almost 30 years as a baggage porter at KennedyInternational Airport in New York, Darren Hoggard spent slow daysgazing at the scenes on the walls of the American Airlines terminal.
On one wall, pioneers with sharp, angled facesand hats rode their horses into the western sunlight, covered wagons intow, on a backdrop of brown and green plains. On another wall, dozenscostumed in bright red, blue and yellow danced and played instrumentsin chaotic celebration.
"If you stare at that long enough, you might go home and dream about it," 49-year-old Hoggard said.
And then, it seemed, the paintings would be no more, slated fordemolition in 2007 along with the rest of the terminal. The news hitHoggard so hard, it showed on his face, and a passer-by stopped to askwhat was wrong.
"Just feeling a little sad about today because next week this could all be gone," he told the woman.
Coincidentally, the passer-by, Beatrice Esteve, was familiarwith the murals' artist, who hailed from her native Brazil. Carybe, asHector Julio Paride Bernabo was known, visited Esteve's home when shewas a child and drank Scotch with her father. She vowed to do whatevershe could to help Hoggard.
She did. And now, against the odds, the muralshave ended up adorning the walls of the new south terminal of MiamiInternational Airport, despite millions of dollars in moving andrestoration costs.
The paintings' 1,600-kilometer trek unfolded like this: AfterEsteve talked to Hoggard, she called her friend Gilberto Sa, who alsohad known Carybe and his family. Sa was on the board of directors ofthe Brazilian construction company Odebrecht, which was buildingterminals at Miami International. Sa, in turn, contacted GilbertoNeves, who heads Odebrecht's US operation, headquartered in Miami.
"Make sure that it's not just going to be dumped in the trash," Neves remembered Sa telling him.
American didn't want to destroy the murals, but Neves said theairline had trouble finding a buyer because of the difficulty removingthe canvasses. When workers tried to peel the murals from the terminalwalls, the canvas began to tear.
"We literally thought it would just be rolling it up," Neves said.
But the murals weren't worthless. Carybe won a 1950s AmericanAirlines contest to paint them, beating several leading artists of theday. He was paid $60,000 for "Rejoicing and Festival of the Americas"and "The Discovery and Settlement of the West." He died in 1997.
The murals were eventually removed by cutting the wall away with them.
Doors had to be removed to get the slabs - 12 panels, each fivemeters by 2.4 meters - out of the terminal. Each slab weighs three tonsafter being reinforced with steel for support.
The artistic restoration process wasn't easy, either, and theentire process cost Odebrecht more than $2 million, more than 10 timeswhat Neves had originally estimated to the board, though he doesn'tlike to discuss that.
"How do you put a price to art to begin with?" Neves said.
Advertisement
Subscribe for our daily newsletter