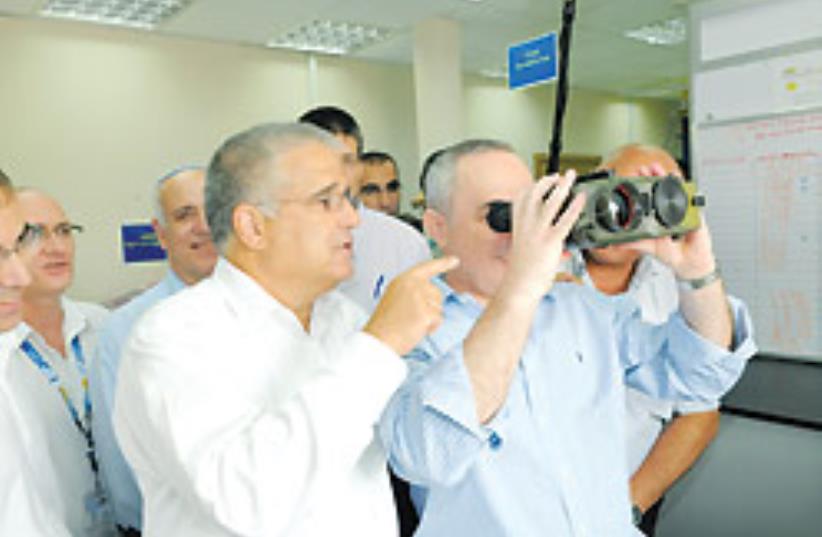 Finance Minister Yuval Steinitz looks through nigh
(photo credit: Finance Ministry)
Advertisement
Finance Minister Yuval Steinitz and a delegation ofTreasury officials visited factories in Sderot on a fact-findingmission Tuesday.
"We are visiting Sderot and the Gaza Stripperiphery to understand the needs of the area and the factories tolearn how to help them," he said.
During tours of factories of food company Osem Investments Ltd.and defense company Elbit Systems Ltd. in Sderot, Steinitz met withmanagers and workers to get an overview of the economic situation. Overthe coming months, he said, he would be visiting factories across thecountry that have suffered from economic and security threats over thelast few years.
Steinitz said he welcomed the Bank of Israel's change of policyin the foreign-exchange market and its decision to halt its dailypurchases of $100 million. But he emphasized that governments could nolonger fix exchange rates.
Israel Export Institute chairman David Artzi onTuesday told the Knesset Finance Committee exports were contributing 50percent to the growth of the economy. An increase of $3 billion inexports adds 33,000 jobs, narrows the unemployment rate by 1 percentand raises gross national product by 1.2%, he said.
"I call upon the government and the Bank of Israel to continueto take the necessary measures to help weaken the shekel and strengthenthe dollar opposite the basket of currencies over the next couple ofmonths," Artzi said.
Since the last quarter of 2008, the depreciationof the dollar has lowered exports of goods and services, not includingdiamonds, by $2.5b. to $3b., he said.
The export institute published a report showing that exports tothe US plunged 30% in dollar terms in the first six months of the yearto $7.5b. compared with the same period last year. It expects exportsto the US throughout 2009 to fall by 24% in dollar terms to $15.2b.Over the last decade, exports to the US, including diamonds, rose 10%in dollar terms on average, the report said.
Exports to the US, not including diamonds, dropped by 10% indollar terms to $5.3b. in the first half of the year and are expectedto fall by 12% to $10b. for the entire year, the report said.
Hi-tech exports to the US rose by 4% in the first six months ofthe year, mainly led by a surge in electric-components exports, whichmade up 24%. Exports of electronic components to the US jumped by 500%in the first half of the year to $872 million from $147m. in the firsthalf of 2008.
However, hi-tech exports to the US in 2009 are expected fall by 18% in dollar terms, the report said.
Advertisement
Subscribe for our daily newsletter