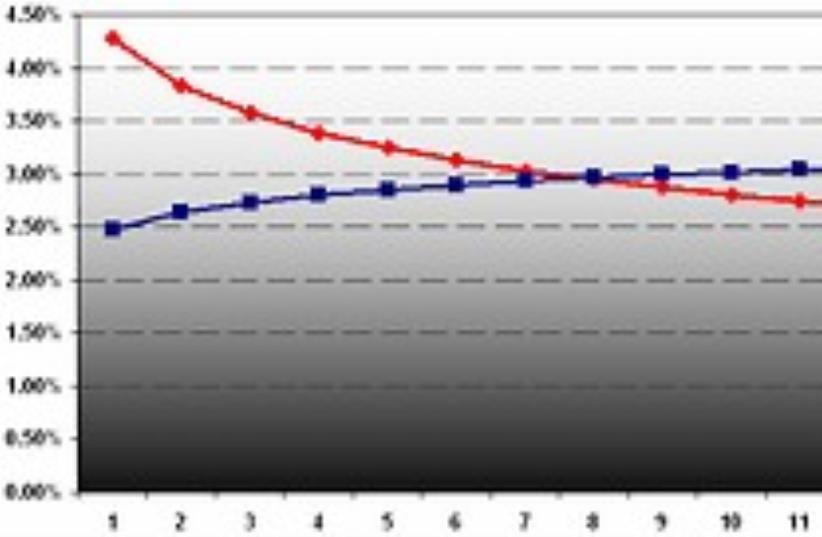 Inflation expectations 1 week ago (red) vs. current expectation (blue) .
(photo credit: none)
Advertisement
The central Bank of Israel (BoI) will announce onMonday its decision regarding the monetary policy for the month ofSeptember. The bank is expected to leave the interest rate unchanged atthe record low level of 0.5% for a sixth month. The main considerationsbehind the decision would be the uncertainty regarding developments inthe global economy, the fact that major central banks keep interestrates low, and estimations that output gap and unemployment willmoderate price pressures.

However, according to market indicators, thecurrent benchmark rate is not compatible with the current situation ofIsrael's macroeconomic environment. BoI cannot wait too long as othercentral banks and should start its tightening campaign mainly due todomestic inflation pressures.

In the past 12 months, the Consumer Price Index rose by 3.5%despite the global recession and the negative implications on theexport sector. In the past 5 months prices rose by almost 4% primarilyas a result of rising housing and energy prices which are estimated tokeep rising in at least the next six months.

Economists forecast that the inflation over the next12 months will range between 2.5% and 4%, while the capital marketpriced even a higher level of 4.2% a week ago. In the past few days,the inflation expectations that are derived by the bond market havedecreased from 4.2% to 2.5% (12 months forward) due to estimations thatBoI will increase rates sooner than previously expected.

Additional Factors: Recent economic indicatorssupport the assessment that the domestic economy is emerging from therecession and relatively immuned to the external shocks. Hence, BoIshould be less expansionary driven. Israel's economy expanded 1 percentin the second quarter and expected to rise also in the current one. Thecomposite state-of-the-economy index rose by 1.2 percent in July -second month in a row, after declines in the index every month sinceJune 2008. The rise in the index this month resulted from an increasein economic activity in all categories, and in particular from steepincreases in manufacturing production and trade and services revenue.Additionally, the Israeli Employment Organization reported a decreaseof 2% in unemployment claims in July.

Need to raise, but will keep unchanged:TheMarket is pricing in the probability of a beginning of rate hikes bythe end of the year. Nonetheless, some economists estimate that BoImight and should raise the benchmark rate already on coming Monday dueto the reasons mentioned above.

The uncertainty is high. Increased confidence that the domesticrecession is ending clearly is not enough to execute a shift inmonetary policy. First, there continues to be considerable uncertaintyabout the strength of the recent trends. Second, banking lendingremained relatively weak. And if growth slows again inflation mightfall. BoI announced recently that it expects increases in the CPI(consumer price index) in the months of July and August, mainly becauseof the increases in VAT (value added tax) and government-supervisedprices, but the bank also predicted a decrease in inflationarypressures later this year. Therefore, the governor Stanley Fischermight hold rates at record low for at least another month and examinethe economic developments and prices dynamics.