A new column: Real estate expert Joanna Stromze explores the streets of Tel Aviv while discovering the best deals the White City has to offer.

By JOANNA STROMZE
OCTOBER 26, 2011 18:05
Chelouche Street Neve Tzedek 311
(photo credit: www.sucasatlv.com)
Advertisement
Joanna Stromze is the Co-Founder of Su Casa TLV Real Estate and can be reached by email at joanna@sucasatlv.comOnly steps from the golden beaches and blue waves of the Tel Aviv shore, the picturesque quarter of Neve Tzedek (Oasis of Justice) is Tel Aviv’s oldest, and perhaps the most architecturally beautiful neighborhood.Though a comparatively small neighborhood, Neve Tzdek teems with culture. The world-renowned Batsheva dance troupe performs at the Suzanne Dellal Center, boutiques sell the handiwork of local designers and artists, and many of the city’s best cafes and restaurants can be found here.History 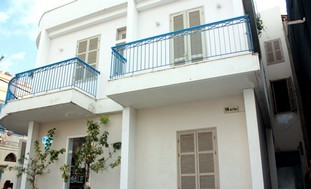 A wealthy Algerian family established the neighborhood twenty-two years before Tel Aviv was built, and a street bearing their name (Chelouche) commemorates the founding family’s memory. 'Beit Aharon Chelouche', Aharon Chelouche's home still remains today on 32 Chelouche Street.  LocationChelouche Street is perhaps the oldest and one of Tel Aviv's most important land marks; like every street in Tel Aviv, numbers ascend from the west to east. This picturesque street begins from the sea and ends in Eilat Rd. the border between Neve Tzedek and Florentin. As it crosses Shabazzi Street, Neve Tzedek's main road, it is ideally located with easy access to many of Neve Tzedek's attractions. ArchitectureWhilst walking along Chelouche Street, it is difficult not to notice the architecture. Two storey houses with red roof tiles and big wooden windows are seen everywhere you go. The colors are magical. Some houses still remain untouched, whilst others have been meticulously renovated and preserved, brought back to their formal glory. The majority of the residences are either Garden duplexes, or duplex penthouses; taking either the first half of the building or the second half. Since the buildings are relatively close to each other, the majority of the houses in Neve Tzedek are fairly long and narrow.While skyscrapers rose up along the skyline and streets widened to accommodate increased traffic and increasingly larger cars, Neve Tzedek has retained its original charm throughout all these years. Just at the end of Chelouche Street is the Neve Tzedek tower standing proud.Real Estate 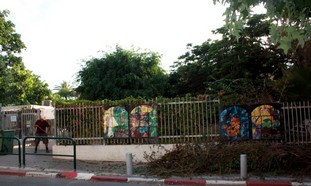 Real estate prices in Neve Tzedek are considered amongst the highest in the city. On Chelouche Street, the estimated average price is anything between NIS 30,000  per square meter to NIS 37,000 per square meter. Prices tend to go higher once crossed Shabazzi Street towards Eilat Road. A garden Duplex of 215 square meters with a 30 sqaure meter private garden is currently available for sale on Chelouche for the price of 4,400,000 NIS. When looking at renting an apartment in this magical street, an average three bedroom apartment is estimated between NIS 9,000 to NIS 13,000 a month. The same garden duplex was rented at NIS 12,500 a month.Early in 2011, a 100 aquare meter apartment on Chelouche Street was sold for NIS 3,442,800.The residents of this picturesque street include foreigners, diplomats and locals. Families immigrate to Neve Tzedek for the private schools, the Neve Tzedek community center, kindergarten's and intimate public gardens that can be seen everywhere. Neve Tzedek is the ideal neighborhood for raising a family. The Marc Chagall School is located on Chelouche and is considered to be one of the best schools in the city with students from 17 countries.  Weather looking to live on or simply wandering through this magical area, Chelouche Street boasts both prime location and an abundance of history. Being the unique neighborhood that it is, Neve Tzedek will always draw people; the history, architecture and character are what make this place so special.Su Casa TLV Real Estate is a boutique brokerage with a focus on the Center Tel Aviv market; whether you are looking to rent, buy or sell real estate in Tel Aviv, Su Casa Tel Aviv is bringing you home.