Rockets explode in Israel despite truce

By YAAKOV LAPPIN
Be'er Tuviya house damaged from rockets 390
(photo credit: Courtesy Be'er Tuviya)
Advertisement
The IDF implemented cease-fire orders on Wednesday night following a week-long operation during which it struck heavy blows on Hamas and Islamic Jihad, but warned that it would respond immediately if civilians or military forces continued to come under attack.Rocket fire critically wounded a reserve soldier in the South earlier on Wednesday.His condition was said to be life threatening.

Click for full JPost coverage
In the hours leading up the cease-fire, the Palestinians in Gaza continued to fire rockets at Israel as the air force responded by launching strikes on terrorist operatives in the Strip.Five Palestinian rockets hit Israel after the 9 p.m. truce deadline, however, since midnight no rocket attacks were reported. The rockets struck in open areas, police spokesman Micky Rosenfeld said. Two rockets were intercepted.The Home Front Command decided to keep schools in southern Israel shut on Thursday and stressed that safety instructions to residents had not changed. “The IDF has received a cease-fire order. Chief of Staff Lt.-Gen. Benny Gantz is sending the [new] orders to the Southern Command. We remain on standby,” IDF Spokesman Brig.-Gen. Yoav Mordechai said.Mordechai added that the IDF would hold its fire “unless there is fire against civilians or our forces, in which case we will respond.”The IDF is currently examining the implementation of a gradual release of the thousands of reservists called up during the operation Southern cities were once again subject to heavy rocket blows on Wednesday, with Beersheba, Ashdod, Be’er Tuviya, and rural districts near Gaza all coming under sustained attack. Some 80 rockets were fired into Israel on Wednesday, bringing the total since the start of the operation on November 14 to 1,506. A number of homes sustained direct strikes in the attacks.Four soldiers were lightly wounded by a rocket in the Eshkol region and airlifted to Soroka University Medical Center in Beersheba.Since the beginning of the operation, most of the rockets, 875, exploded in open territory, while 58 hit built-up areas. 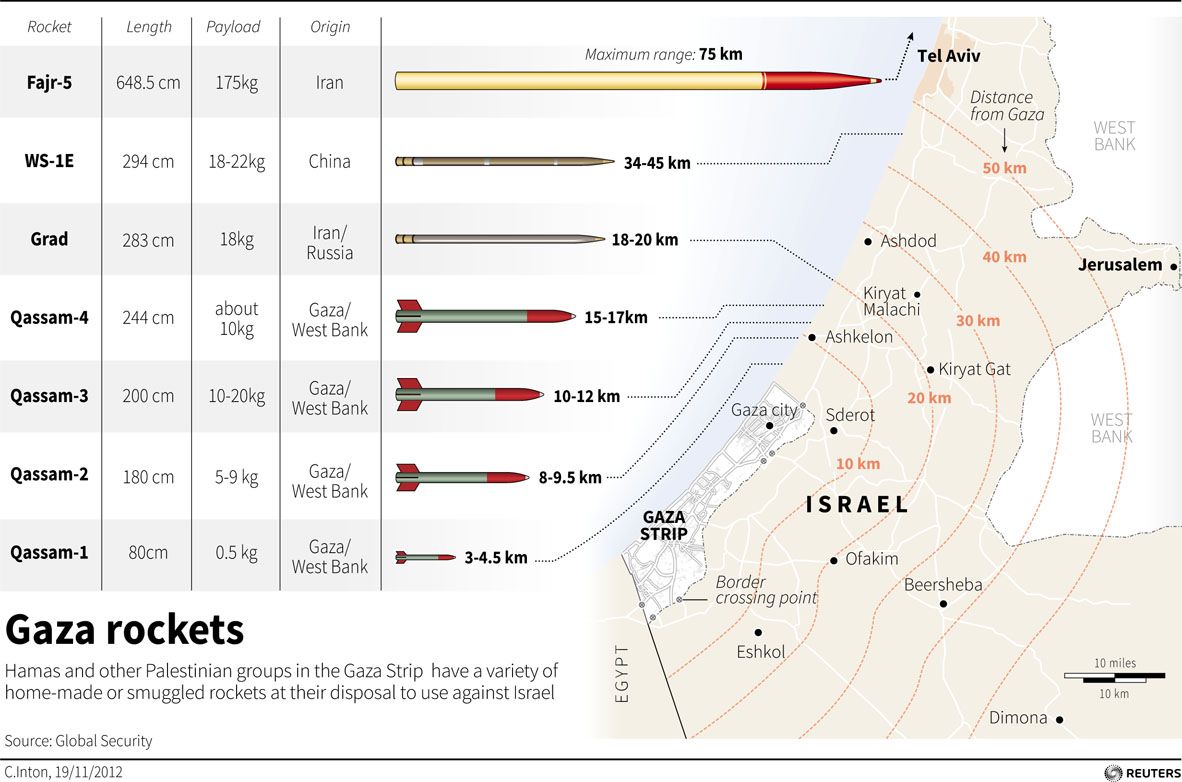 Click to englargeThe Iron Dome system intercepted 84 percent – 421 – of the rockets headed for city centers.Hamas lost its military commander, Ahmed Jabari, 30 field commanders and most of its long-range strategic rockets in the operation, as well as thousands of medium-range rockets and launchers.“We targeted their weapons production and development, with a focus on their drone project,” Mordechai said.He expressed his condolences to the families of five Israelis killed by Palestinian rocket fire, and sent get-well wishes to the 240 wounded people.The IDF believes that the test of Israeli deterrence will be measured in the coming weeks, rather than hours or days.The IAF hit about 1,500 targets across Gaza throughout the operation, destroying 140 smuggling tunnels, 60 bomb tunnels and dozens of Hamas command and control centers.Top terrorists killed include Habas Masmah, a senior Hamas police figure, Khaled Sha’ar, a senior Hamas anti-tank missile operator, and Ramaz Harb, the Islamic Jihad spokesman in Gaza City.On Wednesday night, an explosion was heard in the Azuz area on the border with Egypt. IDF soldiers were scanning the area.On Wednesday, the IAF hit more than 120 targets, and a terrorist was killed by fire from a navy vessel off the Gaza coast.The Israel Air Force struck some 100 terrorist attacks overnight Wednesday, including a floor in a Gaza media building that Hamas used as its intelligence headquarters.A central Hamas command center, a police station, and a hideout for senior terrorists in southern Gaza were all hit in the air strikes.A Hamas aerial defense operation was targeted in an air strike, as was a terrorist seen firing a long-range rocket at Jerusalem on Tuesday. The navy struck several rocket launching areas, a Hamas position, and a building used to coordinate Hamas activities.The IAF continued to hit underground rocket launchers on Wednesday, and struck tunnels used to transfer fuel to Gaza, which is then used for Hamas terrorist activities.

Jpost.com staff contributed to this report\Correction:

A previous version of this article stated that 20 rockets were fired from Gaza into Israel on Wednesday night after the cease-fire came into effect. The IDF has since clarified that only five rockets were fired, two of which were intercepted.