The concept of Jewish deicide refers to the belief that the Jewish people are collectively responsible for the death of Jesus. 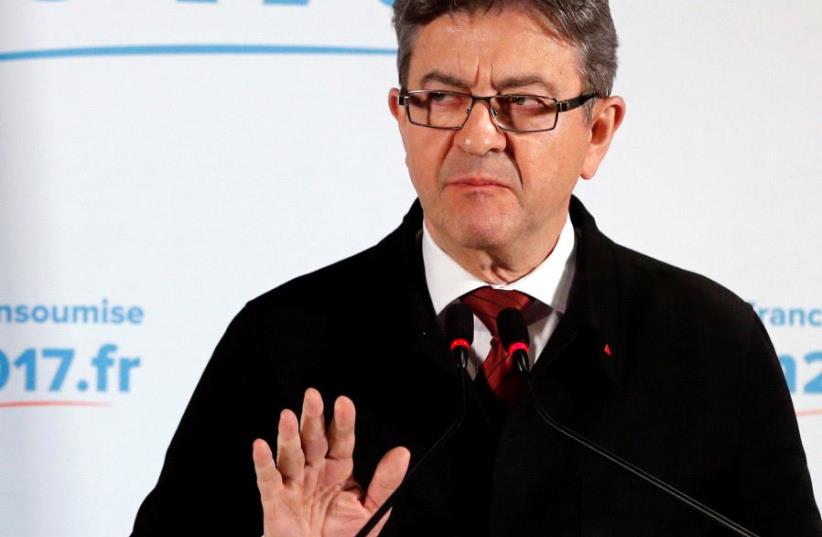 Jean-Luc Melenchon.
(photo credit: REUTERS)
Advertisement
Jean-Luc Mélenchon, a far-left politician founder of  the democratic socialist La France Insoumise (Unsubmissive France) party and Member of the National Assembly for Bouches-du-Rhône's 4th constituency, was criticized Thursday by the Simon Wiesenthal Centre for repeating the age-old antisemitic canard of Jewish deicide, according to a press release from the organization.
The concept of Jewish deicide refers to the belief that the Jewish people are collectively responsible for the death of Jesus, which historically associated with the Catholic Church and Eastern Orthodoxy, in addition to other smaller denominations of Protestant Christianity. The belief has largely been repudiated by most Christian religious authorities since the end of WWII and following the Holocaust.
In an interview on the French BFM-RTL TV news outlet on July 15, Mélenchon said, in response to a question of police tactics in the event of violent protests in France, that they need "stay put like Jesus on the cross without reacting," adding that "I don't know if Jesus was on a cross, but he was apparently put there by his own [fellow Jewish] people."
In response to the comments Dr. Shimon Samuels, the center's Director for International Relations, remarked on the history of the concept of Jewish deicide, in which said that the "repeated accusation of deicide -  throughout the Middle Ages - resulted in pogroms, torture and execution of Jewish communities. Its imagery fueled  violence across Europe, culminating in the Nazi Holocaust.", adding, "these accusations were finally condemned by the    Papal encyclical Nostra Aetate in 1965.... Apparently, Melenchon didn't get the memo!"
"Mélenchon, could be seen as a French Corbyn in his following and his constant statements, maintaining that France bears no guilt in the Holocaust, his participation in pro-Palestinian and anti-Israel rallies, accusing the French Jewish Community leadership (CRIF) of aggressive sectarianism and meddling in politics and, indeed, claiming that UK Labour Party Jeremy Corbyn "had to endure churlish antisemitism claims,"' Samuels added.
Linking Mélenchon anti-Zionist views to his perception of Jewish people, Samuels noted that  "This apparent slip of the tongue demonstrates how 'modern' anti-Zionism is rooted in 'ancient' antisemitism... Melenchonism, an extreme left alliance with Jihadism', is a mirror image of the extreme right...we hope that the center-left and centre-right treat the television interview as a further step to the abyss."