Katsav to be under suicide watch in prison

By LAHAV HARKOV
Former president Moshe Katsav in court 311
(photo credit: Alex Kolomoiski / Pool)
Advertisement
Former president and convicted rapist Moshe Katsav will be under constant supervision by a prison guard in order to prevent him from committing suicide, Prison Services Commissioner Aharon Franco announced in a Knesset Control Committee meeting on Tuesday. Katsav is scheduled to begin his prison sentence on Wednesday. Franco said that the special measures would be taken at the beginning of Katsav’s seven-year sentence, during a meeting on prison suicide rates. A prison guard would be assigned to ensure that Katsav does not bring harm to himself. RELATED:Editorial: No pardon for KatsavOpinion: Seven years too long for KatsavDeputy committee chairman Robert Tibayev (Kadima) commended the Prison Services preparations for such a high-profile prisoner. However, he said it would not suffice to have a personal guard for Katsav only in the beginning of his prison term. “If Katsav commits suicide, it will be a disaster for the state and Prison Services,” Tibayev stated. “Even if the Prison Services are prepared, they must remain concerned all the time.” “We will keep track of his acclimation, we will hold discussions and even change the place of his imprisonment, according to the decisions of a professional committee,” Franco explained. 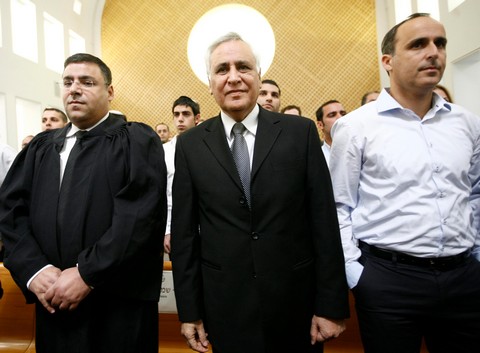 Meanwhile, the Knesset Interior Affairs Committee held a classified discussion on the conditions of Katsav’s imprisonment, initiated by MK Nissim Ze’ev (Shas), who requested that the former president be kept under house arrest until after his final appeal, which is scheduled for January 8, 2012. Sources in the committee said that few MKs attended the discussion, and that Ze’ev, committee chairman Amnon Cohen (Shas) and MK Otniel Schneller (Kadima) favored the option of house arrest, while MK Dov Henin (Hadash) opposed. Representatives of the Public Security Ministry in the meeting also voiced opposition to the Shas MK’s initiative.No vote took place, and the protocols of the discussion will be sent to Public Security Minister Yitzhak Aharonovitch. Ze’ev repeated his assertion that Katsav’s Kiryat Malachi home is “a building that is suitable for house arrest. It is surrounded by walls, which the Shin Bet required when Katsav was still president.” “All of the elements necessary to legally put him in house arrest are already in place,” Ze’ev told The Jerusalem Post. According to the Prison Law, a Public Security Minister may send a prisoner to a “temporary prison” in case of “contagious diseases or other reasons that he sees fit for this instruction.”