Peres continues to have faith in Oslo Accords

By GREER FAY CASHMAN
Peres at Rabin funeral_311
(photo credit: Marc Israel Sellem)
Advertisement
While the country’s right wing factions contend that the Oslo Accords spelled catastrophe for Israel, President Shimon Peres expressed his continued belief Tuesday night that they were, in fact, a blessing.After kindling a memorial candle for slain prime minister Yitzhak Rabin on the 16th anniversary of his assassination, Peres declared that the majority of those who had been opposed to the Oslo Accords were now in favor of a two-state solution to the Israeli- Palestinian conflict.Recalling the fateful night on which Rabin was the target of three bullets at the conclusion of a peace rally, the president said the rally had been full of hope.Addressing himself directly to the slain leader, Peres reviewed his distinguished military career and his political leadership, which came to an end in a way no one had anticipated. He spoke of Rabin’s transformation from the chief of General Staff who directed military operations during the Six Day War, to the man of peace who was prepared to make territorial compromises rather than compromise on morality and ethics.RELATED: Candidly Speaking: Stop distorting Rabin’s legacy On Rabin and Gedalya Under Rabin’s leadership, said Peres, Israel knew how to be a strong shield, yet unwavering in its hope for peace.In seeking an accommodation with the Palestinians, he went on, “we knew that Arafat was not Sadat, but after the agreement with Jordan was torpedoed, the only partner we had left was the Palestinian partner.”Still speaking to Rabin, the president said: “Yitzhak, I knew that this was probably the most difficult decision of your life, because even with the PLO, there were no guarantees. But you chose, albeit with a heavy heart, to do something of historic significance.”The Oslo Accords, declared Peres, formed the basis for the two-states-for-two-peoples solution. It was the first time in the history of the Jewish people, he said, that a Palestinian leader had withdrawn from the concept of the 1947 lines and had moved his tactic to the 1967 lines. Because the PLO had been in need of external support, it publicly recognized the State of Israel, pledged that it would desist from terror and entered into peace negotiations.Not everything that had been desired had been achieved, Peres acknowledged, “but what was achieved created the framework for a new relationship between Israel and the Palestinians.”The Oslo Accords, he insisted, opened up new markets for Israel, promoted international investments here and brought an end to the Arab boycott of the Jewish state. They also facilitated the peace agreement with Jordan and enabled Israeli representation in a number of Arab states, namely Qatar, Morocco, Oman and Mauritania. 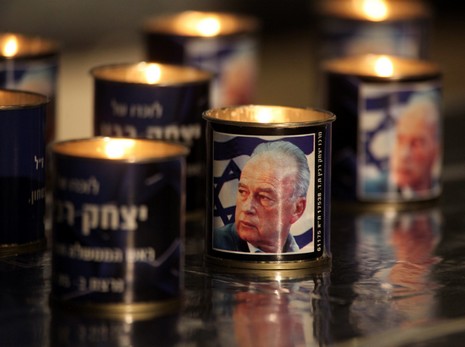 There had been considerable resistance to the accords among the Israeli public, Peres recalled, saying that he would never forget with what courage Rabin had walked “through fields of hatred and incitement.”It was no secret that there were sharp differences between himself and Rabin, and these caused them both considerable frustration, Peres said, but when it came to basics, they had a shared vision and conviction that Rabin’s path was one of peace and security.“It was the correct path,” he said.Rabin’s granddaughter Noa Rotman, who won the hearts of the nation and the world when she eulogized her grandfather at his funeral in November 1995, said that the shock waves following his death had subsided, but nonetheless there had been many gray events.She was awash with so many different feelings, she said, noting that at a distance of 16 years, she was more mature – a mother, and generally a proud citizen of her country – yet on this date, all the wounds opened anew, and she did not know how to protect herself from the pain of loss, the affront of murder and the finality of death.Rotman thanked Peres for maintaining the tradition of lighting a candle for her grandfather and the statesmanlike manner in which the president honored his memory.
Advertisement
Subscribe for our daily newsletter