Palestinians attempt to ride bus from Ramallah to J'lem without permits, to highlight "discriminatory" transport system. 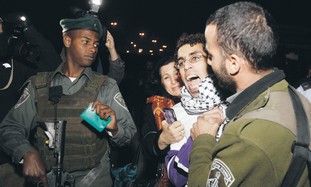 Immediately, scores of journalists crowded on after them. Many others trailed the bus in separate vehicles until it was stopped at the Hizma checkpoint outside of Jerusalem.As the bus stood there, one of the activists held a sign against a window that said, “Boycott apartheid.” Another activist briefly held up a Palestinian flag.Soldiers and police entered the bus and asked the activists to leave, but they refused. One policeman spoke to them in Arabic to explain that they would be arrested.As the bus stood there for an hour, Arraf described her interaction with the police to journalists.“They wanted to see IDs. They asked for permits. We said, ‘It’s our right to go to Jerusalem.’ They tried to get us off the bus. We refused,” she said.At one point, the soldiers tried to drag activist Badee’a Dweik off the bus, but left him on the floor. He spoke briefly with reporters as he lay there before going back to his seat.“Why do I need to leave the bus,” he asked. “Why not ask the settlers to leave the bus?” To the soldiers who gave him the option of walking out the door, he said, “I have a right to be on this bus.”At some point, under army and police orders the bus driver simply shut off the engine, saying he had not understood what was happening when he picked up the activists.“If I had,” he said, “I would not have stopped.”Israeli passengers on the bus got off and were able to get onto other buses or find rides into the city. One, a woman named Esther, was particularly annoyed.“I do not know what they are talking about,” she said.It is Israelis who have issues with transportation because of fear of terror attacks, she added. These are buses that are protected against stones and bullets in case of Palestinian violence.“It’s not racism, it is security,” she said.“When I can walk freely in Ramallah with my children, they can ride on my bus.”Another passenger, Haggai Segal, who wore a skullcap, said he had asked the Palestinian activists, “‘Can I go on a bus in Ramallah as a Jew?’ They answered: ‘I could not.’” He shook his head at the comparison to the civil rights movement.“This is not a Martin Luther King bus,” Segal said.But the Palestinian activists themselves said they understood the comparison was not exact. The point, they said, was that the West Bank and east Jerusalem belonged to the Palestinians, not Israel, and as such they should have the right to travel freely.Eventually, the police drove the bus into a parking lot just above the checkpoint, where they waited until it got dark before boarding and dragging out the activists, in some cases head-first.One pro-Palestinian supporter yelled at the police, and at the soldiers guarding them.“We all have human rights,” she said.“You are being paid by a Fascist state to engage in racist discriminatory behavior.I do not think this is how you were raised. It sure isn’t the Jewish way.”
Advertisement
Subscribe for our daily newsletter