An Israeli application allows participants of mass events to identify themselves in the crowd, tag and share.

By ALEXANDRA MANN / NO CAMELS
Image of ice hockey match 370
(photo credit: Fanograph)
Advertisement
Alexandra Mann writes for NoCamelsTagging people in your photos is a great way to make pictures social and an elegant way to show off the cool things you do. But while tagging five friends in a photo from last night’s pub outing is easy, a graduation picture, on the hand, is a project that requires multiple “taggers”.So what about a music concert or a sports event, with tens of thousands of people? How can they all be captured in the same image and then be spotted individually and tagged? An Israeli application does just that: It allows participants of mass events to identify themselves in the crowd, tag and share. 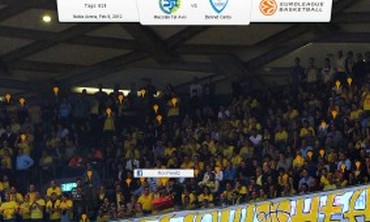 The service, called Fanograph, takes panoramic gigapixel images. In other words, pictures with a multi-billion pixel resolution, in an angle of 360 degrees. According to Intrpx, the company behind Fanograph, the pictures are precise and high in detail, as opposed to regular high quality digital pictures taken with professional or semi-professional cameras.More than 400 images in less than seven minutesUntil Fanograph came along, pictures of that complexity took a long shooting duration of 20 minutes – not ideal for a concert with a huge crowd. Michael Hermon, Co-founder of Fanograpgh, tells NoCamels: “Our main challenge was to develop a new image shooting and processing technique in order to able to shoot over 400 images in less than seven minutes with complications of changing light, extreme range which needs to be in focus, and moving people. All this on a tight budget and processing time of less than 12 hours.” 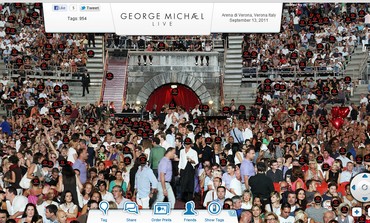 When a gigapixel image is uploaded by Fanograph, users who took part in such event and want to tag themselves need to sign in with their Facebook account. This way, the system recognizes them and enables them to tag other people they know, or to remove tags of themselves, which were added by their friends.When tagged in the giant pictures, a link to their Facebook page is connected to the tag, just like from within Facebook’s platform. Privacy settings are the same as well: if a profile is public people can enter it, if it’s private only the details the user decided to share are disclosed.World’s most tagged picture everIn 2010, Intrpx won a Guiness World Record for creating the world most tagged picture ever during Rihanna’s concert in Tel Aviv – with over 4,800 out of the 15,000 attendees tagged. 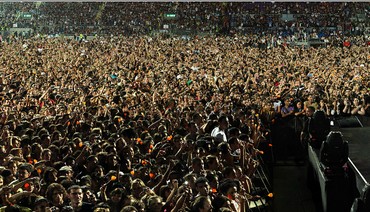 Besides music events, a few sport events were also “Fanographed,” including a Basketball Euro-league game, an Israeli Football Association game and an Ice Hockey match.The ability to share the picture you tagged yourself in makes it super viral. For example, a picture from George Michael’s concert has 10,000 fans who tagged themselves. In a months’ time more than 130,000 people viewed it and millions were exposed to it by their friends’ wall posts.The Israeli company Intrpx, formally Chili-Media, has been producing interactive imaging solutions since 2008. They offer virtual tours that are based on an interactive 360˚ image, 3D photography, and gigapixel mosaics. Over the years Intrpx collaborated with the Sheraton, ECI, Kings of Leon, George Michael, Bezalel Academy of Arts and Design and several others.Fanograph won several advertisement awards, such as Cannes Lions, Cresta, PIAF, The communicator and Cactus.NoCamels - Israeli Innovation NewsFollow @JPost_Lifestyle
Advertisement
Subscribe for our daily newsletter