In The Media: A public relations dream come true

By BENJAMIN JOFFE-WALT / The Media Line
JANUARY 21, 2010 20:54
Search and rescue efforts at the UN headquarters in Haiti
(photo credit: AP)
Advertisement
It's been a tough year for Israeli public diplomacy. In the aftermath of the Gaza war, for more than 12 months the Jewish state has been slammed by international media, think tanks, rights organizations and the United Nations. Ambassadors have been recalled from Tel Aviv, arrest warrants have been issued for senior Israeli politicians and leaders, an elderly European-born Jewess led a fast for Gaza, dozens of human rights reports on Israel's conduct in the war have been widely distributed and the international campaigns to launch boycotts and sanctions have seen measured success.Israel has without question been in dire need of an image makeover. And with the crisis in Haiti, it got it.For better or worse, Israel has received its public relations knight in shining armor in the form of an earthquake. It sent more than 200 doctors, nurses, soldiers and volunteers to Haiti soon after the gravity of the damage became apparent. Within two days of arriving, the delegation had set up a field hospital, administered emergency medical aid from the Port-au-Prince stadium and rescued more than a dozen living survivors from collapsed buildings.The Jewish state's rapid and extensive response has hardly gone unnoticed by the country's media, diplomats and foreign advocates. Updates from Israel's delegation in Haiti have been sent regularly to hundreds of Israeli and foreign journalists via e-mail, video, blogs and social networking sites. Journalists were even sent a video of ZAKA volunteers somewhat unsuccessfully leading a group of Haitians in singing "Haveinu Shalom Aleichem" - "We have brought peace upon you."Israeli newspapers and TV news programs have dedicated extensive space to coverage of the delegation in Haiti. Former US president Bill Clinton's thanks to Israel made the front page of one of the leading dailies on Wednesday, followed by an article on the effects of Israel's aid entitled, "Now they love us." When a Haitian mother who gave birth in the Israeli field hospital decided to name her child Israel, it was the leading item in most local news outlets."Israel sent a very large delegation, and we were one of the first to arrive," Mati Goldstein, head of the ZAKA rescue delegation, said on the phone from Haiti. "We built a hospital, are treating 300 to 400 people a day and rescued 19 people from the rubble, more than any other delegation."Diaspora Affairs and Public Diplomacy Minister Yuli Edelstein said rescue operations were one of Israel's shining lights."Whenever there is a disaster happening in any part of the world, Israel is reacting," he said. "We unfortunately have a lot of experience and well-trained personnel that can help a civilian population suffering the consequences of earthquakes, floods, any kind of disaster. Israeli forces, rescue teams and medical teams operated in Armenia, in Mexico, in certain parts of Africa, all over the world."The response in Haiti was very quick. Before most of the countries managed to prepare their field hospitals for action, the Israeli doctors and nurses were already practically saving peoples lives... At this stage we are talking about hundreds of lives saved in Haiti by the Israeli team... From the reactions we are getting from different crews, delegations, teams from all over the world in Haiti, they basically all admire the work of the Israeli team."BUT WHILE praising Israel's response, critics say Israel's attempts to accent its aid to Haiti have been over-the-top, and accuse Israeli public relations officials of exploiting the disaster for political ends. 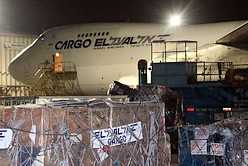 "The extreme right wing in Israel is using the Haiti operation to reframe the fallout from the Goldstone report in the eyes of the world," Dr. Yoel Donchin, an anesthesiologist and a veteran of Israeli rescue operations, charged. "They know the Haitians are not part of the agenda and this is just for propaganda. But if it's good for Israel, they don't care."You can't save everyone, and anyone who has studied mass casualty situations knows that the first thing you have to do is not rush in but to send a small team to evaluate what is the best way to help in the long run. So the fact that Israel wants to race to be the first to be there means nothing in the big picture, because Israel is usually the first to arrive but also the first to leave," claimed Donchin."If, for example, Israel were to bring water purification systems and chemical toilets, it would be much more helpful. But their logic is that then it wouldn't get on the news.""Like Everest climbers, Israel places her national flag at the peak to prove that the site has been conquered," Donchin wrote in a Tuesday opinion piece on the Hebrew news site Ynet.Shlomo Aronson, professor of politics at the Hebrew University, took issue with such assessments."Yes, it gives another image of Israel to those thinking about the rubble of Gaza," he said. "Here Israel is lending help to people who have been victims of natural disaster. But it's not a matter of political benefit nor a deliberate response to Gaza because Israel did similar operations before Gaza. We are simply better equipped and better trained than most of the others.""They say salvaging a few people from the rubble is not necessarily worth it," he said of Donchin's argument. "But Donchin deliberately omitted the fact that we don't have the ability to do what he wanted to do, and we need to acknowledge what we can and can't do."Edelstein said that while Israel was not offering aid as a tactic of public diplomacy, he hoped the positive images would change perceptions of Israel.
"Israeli is not assisting the Haitian population to get some browniepoints," he said. "We are doing that because we are Jews, we areIsraelis, and because we were brought up with this famous talmudicperception that 'saving one life is like saving the entire world.'"But definitely I wouldn't deny that pictures of Israeli teams,uniformed Israeli doctors and soldiers helping, saving, rescuing, arepositive pictures. I sincerely hope that for people with open minds aquestion will at least appear: 'How come the same people who have beenportrayed as coldhearted murderers are right now risking their ownlives and definitely their living standards to save people and to helppeople they don't know, and people basically that are thousands ofmiles from our country?'"Dahlia Scheindlin, a public opinion researcher and politicalstrategist, added: Do I think the government participated in this aideffort for publicity? Absolutely not. I don't think it was a cynicalmove. Israel would have participated anyway. But Israelis do try to usethese things to try to leverage a better image for themselves aroundthe world."
Advertisement
Subscribe for our daily newsletter