A look at Israel’s science fiction and fantasy community ahead of its most well-known festival.

By YITZCHAK BESSER
SEPTEMBER 30, 2012 11:26
ICon Darth Maul 370
(photo credit: Yarden Kadman)
Advertisement
At a skyscraper in Petah Tikva, the Leader of the Geeks sits hard at work. Admittedly, there wasn’t an election or anything, but as the director of the ICon Annual Science Fiction, Fantasy and Role-Playing Games Festival, Tomer Shalev would be a strong candidate for the job.Shalev, who works by day at a leading investment management firm, has had his ICon alter ego for the last three years, although he was involved in the conference for several years before that.The festival, which will take place this year at Tel Aviv’s Eshkol Hapayis building on October 2-4, features over 150 events with over 80 staff members – all of whom go unpaid – and 160 volunteers.“We rely on local talent,” says Shalev. “Without volunteers, we wouldn’t be able to put on the festival. That’s partly why we do it on Succot, since both participants and volunteers are available. School hasn’t started, people are on vacation from work for the holiday, so it works out well for us.”Unfortunately, the time frame is a double-edges sword for ICon.“I get asked all the time why don’t do a longer festival. ‘Everything’s so great; I want to do it all. Why do have to pack it all into three days, so that some of my favorite stuff overlap with each other?’ I wish I could tell them that we could do more, but frankly we only have Succot. Afterwards, everyone gets back to their real lives,” Shalev says. 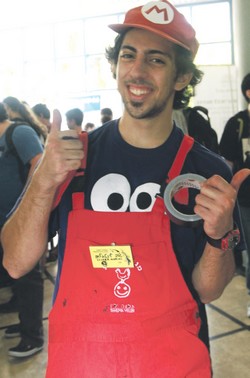 It’s that break from reality that ICon provides that seems to be appealing for so many. The festival receives thousands of visitors every year and the number grows each time. It should be noted that this is not the only science fiction and fantasy convention in Israel. Although ICon is the largest and most wellknown festival, there are several similar events throughout the year, specifically Hanukka, Passover and over the summer.“There’s plenty of potential for events here,” says Shalev. “We have a strong core of a few thousand – our faithful following – that comes to these events. But ICon has a wider appeal than some of the more specific events done during the year. We have something for everybody, for beginners who want to dip their toes in the world of sci-fi and for those who have been doing this kind of stuff for ages.”Shalev touts the festival as a place for everyone, young and old alike, a fact reflected in the “ICon for Little Ones” programs debuting this year.Nevertheless, the festival, like many science fiction and fantasy conventions, has developed a bit of a reputation for gathering the geekiest of the geek, the creme de la nerd crop. When discussing the colorful cast of characters in attendance, Shalev revels a little in the zeal of the sci-fi and fantasy community.“Everybody has imagination and it’s something that we love to see. I think that’s something that appeals to everyone, the idea of coming out and playing pretend.”“It doesn’t matter what you like or where you come from, we want to see you with us,” says Shalev, something that definitely shines through in the wide-ranging eclectic nature of ICon’s schedule. While last year’s festival featured zombies, this year’s is dedicated to the theme of discoveries.Programs range from “Inconceivable!: Impossible Discoveries in Mathematics” to a event titled “The Ultimate Redheads Panel,” to a lecture discussing “From Walt Disney to Joss Whedon: Feminist Disclosures and Gender Subversion” and a live performance named “When Improvisation and Fantasy Meet.”Clearly, ICon takes on all comers, whether you let your inner freak flag fly over slaying vampires, smashing orcs, arguing about postmodernism in 21stcentury anime or any of the myriad other topics loosely classified under the banner of science fiction and fantasy.“There are many worlds here,” notes Shalev, who hails from a Star Trek background, vis-a-vis his first connection to science fiction. But, part of the fun of it all, he says, is in the escapism and the flight from reality.“There are many people out there who do what I call ‘gray work.’ Look, I work for an investment firm, so I’m one of them. But, that’s why I think people need sci-fi and fantasy, as a vaccine for office work and a way to run away from the normal.“And yet, sci-fi gives us a way of viewing ourselves. We can learn life lessons from it. I was watching an episode of Star Trek a few years ago, and it was really similar to the political reality of the Disengagement, and all of the problems we faced with that,” he continues.“While running away, we dig deeper and learn more about our own world, going through the back door, so to speak.”In short, intergalactic problems are our problems.Stepping away from the philosophy, Shalev emphasizes that, more than anything else, ICon is all about the participants.“We love the people who come, who take part, either as visitors or as volunteers.”According to Shalev, one of the main goals, aside from promoting science fiction and fantasy in Israel, is providing a place for people to mingle and connect.“It’s about making real friends, not imaginary ones,” he quips with a smile.And so the conversation turns to the people, the geeks themselves. When faced with the quintessential stereotype – at least in the American mindset - of a geek, namely a bespectacled, socially awkward guy unable to talk to women but able to lecture for an hour on the syntax of Klingon, Shalev flatly denies the claim.“I don’t know what a geek is,” he says, in a phrase reminiscent of US Supreme Court Justice Potter Steward’s classification of pornography: “I don’t know what it is, but I’ll know it when I see it.”“There are geeks who like one thing and geeks who like something entirely else,” he continues, explaining that there are entirely different worlds and people in them that could be termed “geeks.” Some build rockets; others make wands.“But, that geeks are anti-social or anything is absolutely untrue. The people that show up for ICon are very friendly and outgoing. They might not be in their everyday lives, but here, I see all the time people calling for a game and suddenly starting to play with people they’ve never met before. Maybe it’s because they feel that they are in a safe environment, where there’s people who like the same stuff that they do. But they are very social here, and it’s great for meeting new people.” 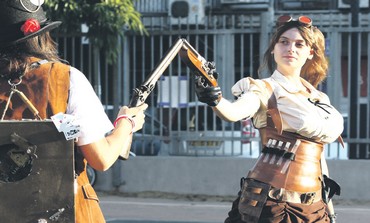 Shalev is equally adamant about refuting the second half of the stereotype.“That most of the people that turn up are men? Definitely not. For women, it’s not a problem to be a geek and participate. In fact, we had more female volunteers last year than male ones. And in terms of visitors, I’d say it was about 50/50, with the numbers maybe leaning a little in favor of the woman. So to say that science fiction and fantasy is a man’s game? No way.”That is a sentiment shared by Liat Shahar-Kashtan, the chairwoman of the Israeli Society for Science Fiction and Fantasy, one of the organizers of the ICon festival.“Maybe at one time, this stigma of anti-social guys being the perennial geeks was true, but not anymore. Women are just as active in the community, if not more so. And geeks of all kinds are becoming more social. That’s one of our organization’s goals, to provide a social outlet for people who like sci-fi and fantasy,” she says.Shahar-Kashtan, who like Shalev was active in the community for years before taking up the mantle of leadership, has been the head of the ISSFF for three years. And just like the work done at ICon, the ISSFF is all run through volunteers.An agronomist by trade, Shahar- Kashtan credits Stephen King’s IT and Douglas Adams’ The Hitchhiker’s Guide to the Galaxy as some of her first forays into the world of sci-fi and fantasy.“I remember reading them and then starting to read more and more, and started watching sci-fi movies, but I felt like I was an outsider. My friends were my friends, but they couldn’t really connect with it, so I kept feeling like I was a little alone,” she says of her youth.“Then, in my second year of university at Rehovot, I came across the local branch of the ISSFF. They were doing this mini-conference things and I ended up staying there till five in the morning. And I’ve been involved ever since.”Shahar-Kashtan puts a premium on the social side of the science fiction and fantasy community.“That’s one of the reasons I started getting involved in the group’s leadership – to help people like me, who felt like they were outsiders.”In terms of Israeli society’s views on science fiction and fantasy, Shahar-Kashtan sees a trend forming.“It’s starting to be okay to be a geek. Sci-fi is starting to get a little popular, a little cool. More people are accepting of it.”Shalev would agree with such an outlook, but is a little less optimistic.“Yes, science fiction is starting to buzz around Israel, which is great and we’re starting to see more of it than we have in the past. But, for TV and movies, people just don’t want to take a chance on it because of the economics. It can be an expensive gamble, and, to my chagrin, Israel’s not quite there yet.”But the community carries on, rolling their twelve-sided dice and slaving away on fan fiction. And it’s the community that matters, say Shahar-Kashtan and Shalev. The friendliness of the people and the social atmosphere at the festival that puts some of its sometimes-less-than-gregarious participants at ease and lets themselves be themselves. This, more than anything, is the overarching message of ICon: It’s the people themselves that matter the most. When it comes to the world of geekdom, everyone’s welcome.
Advertisement
Subscribe for our daily newsletter