Independence Day: Snapshots over the years

Despite continuous political turmoil and violence, Israelis have always found a way to grow and innovate.

By ALINA DAIN SHARON/ JOINTMEDIA NEWS SERVICE
Assassination of Prime Minister Yitzhak Rabin 370
(photo credit: State of Israel National Photo Collection)
Advertisement
In honor of Israel’s 64th birthday, JointMedia News Service takes a look at the major events that shaped each decade in Israel’s history since 1948. The emerging picture shows that despite continuous political turmoil and violence, Israelis always found a way to grow and innovate.1948-58In November 1947, three decades after the Balfour declaration favored “the establishment in Palestine of a national home for the Jewish people” and three years after the Holocaust, the United Nations General Assembly voted 33 to 13 for two “independent Arab and Jewish States.” The State of Israel was established on May 14, 1948, and David Ben-Gurion became the nation’s first prime minister. The day after the proclamation, Arab countries invaded and the war for independence began, but the newly formed Jewish state came out victorious by 1949. 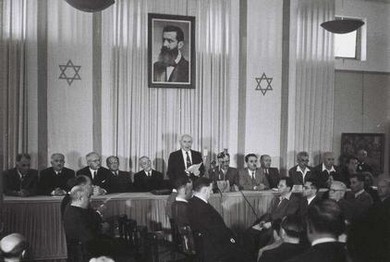 Declaration of Independence
After the establishment of the 1950 Law of Return, about 680,000 mostly European and Mediterranean Jews settled in Israel by 1951.In the 1956 Sinai Campaign, Israel launched an attack against Egypt, together with France and Great Britain, capturing the Gaza Strip and the Sinai Peninsula. Shortly afterward US pressure forced Israel to relinquish the territories.1958-68This decade was strongly defined by the kibbutzim, the collective communities created throughout the Jewish state. Kibbutz members were considered the best of Israeli society, and many pursued elite careers in the government and military. The Kibbutz culture yielded the development of drip-irrigation, a system that can directly water a plant more efficiently than the sprinkler. 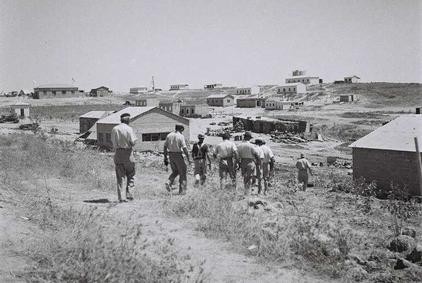 Kibbutz Ruhama in the northern Negev
After armies from surrounding Arab nations began threatening Israel during the Six Day War of 1967, the country exacted a major victory in a surprise offensive, gaining control of the Golan Heights, Gaza, Sinai and the West Bank. Israel also gained East Jerusalem, unifying the city.  Violence and war didn’t stop Israeli arts from flourishing. In 1964, “Sallah Shabati,” a film about the struggles of a Mizrahi immigrant family, was nominated for the Foreign Language Film Academy Award. In 1966, renowned writer Shmuel Yosef Agnon won the Nobel Prize in literature.1968-78In the Yom Kippur War of 1973, the Jewish state was surprised with an attack by Egyptian and Syrian armies on the holiest day of the Jewish faith, narrowly escaping defeat. A year earlier, 11 Israeli athletes were murdered by Popular Front for the Liberation of Palestine (PLO) terrorists during the Olympic Games in Munich, Germany. 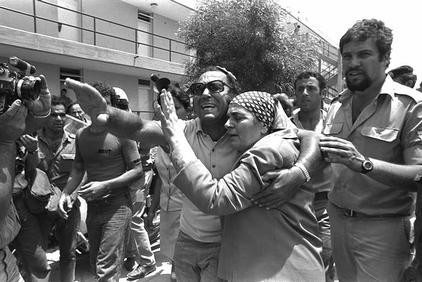 Family reunion after Entebbe raid.
In 1972, Japanese gunmen recruited by the PLO opened fire at Lod’s Airport near Tel Aviv (now Ben-Gurion International Airport). Twenty-eight people were killed, including Puerto Rican Christian pilgrims and Israeli scientist Aharon Katzir. In 1974, Palestinian terrorists attacked the town of Ma’alot, including an elementary school, ultimately killing 22, mostly children. But when an Air France plane with Israeli and Jewish passengers was hijacked in 1976 by Palestinian terrorists and forced to land in Uganda, the IDF flew commandos to a daring rescue mission in which they killed all the terrorists and freed the hostages.Also in this decade, four Israeli films were nominated for the Foreign Language Film Academy Award.1978-88In 1978, Egyptian President Anwar El Sadat and Israeli Prime Minister Menachem Begin signed the Camp David Accords, driven by US President Jimmy Carter. Sadat and Begin won the 1978 Nobel Peace Prize, and a historic peace treaty between Egypt and Israel was signed the following year. In this decade PLO terrorists seized a bus from Israel’s coast highway, killing more than 30 civilians. A series of reprisals on both sides followed, and villages close to Lebanon were frequently shelled with mortars. In 1982, Israel attacked Lebanon in an effort to remove the terrorists. Though Israel drove the PLO out in the first Lebanon War, many soldiers died in the process. Israel also bombed and destroyed the Osirak nuclear complex in Iraq to prevent the building of nuclear weapons. 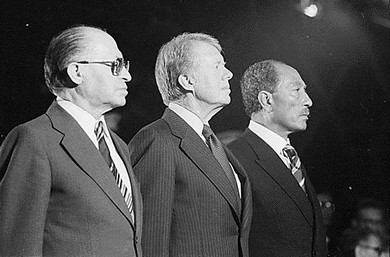 Begin, Carter, Sadat at Camp David.
By 1987, the First Intifada uprising began, bringing with it thousands of Israeli casualties through Molotov cocktail, grenade, bomb and other attacks. Nevertheless, Israel won the Eurovision song contest for the second time in 1979, and another film was nominated for the Foreign Language Film Academy Award in 1984. More than 8,000 Ethiopian Jews were secretly airlifted to Israel in Operation Moses.1988-98This decade saw Israeli society change fundamentally, primarily spurred by a mass immigration of Jews from the Soviet Union. More than a million Russian Jews arrived in Israel, many during the height of the Gulf War, when the Saddam Hussein’s Iraq was shelling Israel with missiles. Though at first struggling to assimilate both socially and economically, many ultimately became politically active and exacted enormous influence on culture, music, science and technology. Russian Jews notably founded the “Gesher” theater, which at first staged plays only in Russian, but soon transitioned into Hebrew. 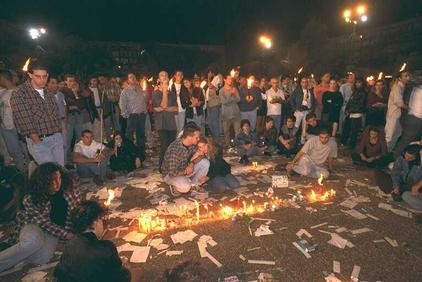 Teenagers mourn Yithak Rabin
Israel signed a 1994 peace treaty with Jordan. In the 1993 Oslo Accords—for which Prime Minister Yitzhak Rabin and Yasser Arafat won the Nobel Peace Prize—Israel and the PLO signed an agreement primarily focused on Palestinian self-governance in the territories of Judea, Samaria and the Gaza Strip. Israeli society was deeply divided over the agreement, but the 1995 assassination of Prime Minister Yitzhak Rabin by Jewish extremist Yigal Amir traumatized and united Israelis of all political persuasions. One of the worst terrorist attacks of the decade occurred in 1996, when two Jerusalem buses were bombed, killing 26 people and injuring about 80. 1998-2008In 1998, an Israeli woman was crowned Miss World. The Second Intifada started in 2000, and by 2005 more than a thousand Israelis were killed in terrorist attacks. The bombing of the Dolphinarium discotheque in Tel Aviv killed 21 teenagers. A major bombing of a Netanya hotel on the eve of Passover killed nearly 30 and injured 140. 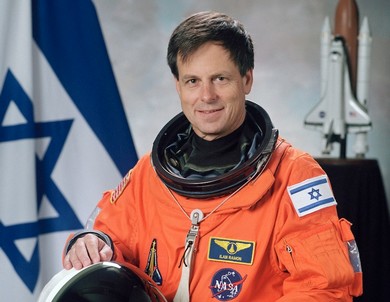 Ilan Ramon, the first Israeli astronaut
In 2005, Israel withdrew from the Gaza strip, and the 2006 Second Lebanon War saw Israel fight Hezbollah forces. That same year, Hamas captured Israeli soldier Gilad Shalit. Notable high-tech Israeli inventions and start-ups in this decade include the Disk-on-Key, a precursor to the now ubiquitous flash drive; wireless capsule endoscopy, a pill-sized camera that can pass through the digestive tract and detect diseases, and the instant messaging service ICQ. Four Nobel prizes were awarded to Israelis in the fields of economics and chemistry. The first Israeli astronaut, Ilan Ramon, famously participated in the international Columbia Shuttle space mission in 2003, but was tragically killed when the shuttle exploded.2008-2012Gilad Shalit’s release in 2011 again polarized Israeli society because it required the release of about 1,000 Palestinian terrorists from Israeli prisons. 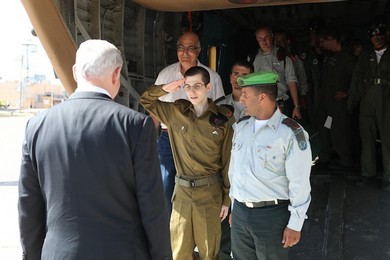 Gilad Schalit salutes Prime Minister Binyamin Netanyahu
Three more films were nominated for the Foreign Language Film Academy Award, most recently “Footnote” in 2012. Also in 2012, Tel Aviv was named Best Gay City in an international competition. Two more Nobel prizes were awarded to Israelis in chemistry.Information from TIME, BBC, the Forward, Yedioth Ahronoth, the Chicago Tribune, ADL, the Jewish Virtual Library and the Israel Ministry of Foreign Affairs was used in this report.