It's the what that matters, not the why

A personal account of Israel’s development and humanitarian efforts in Haiti.

By GUY SEEMANN
Tending to crops 370
(photo credit: Swoan Parker/Reuters)
Advertisement
When asked the question, “Why does Israel spend thousands a month on Haiti?” I find myself at a loss of words. The same question could be asked when we talk about Nepal, El Salvador, Malawi, Chad, East Timor and so on. The number of countries with Israeli development teams in 2011 was approximately 110. For a country with only 7.7 million inhabitants and a GDP of 242 billion dollars, that is quite impressive.Yet, a majority of those countries hold almost no international, economic or political power – nothing to warrant a worthy investment for the sake of bolstering Israel’s image or financial sector. Superpowers and politically troubled nations alike have always used international development as a tool to buttress their current influence in the world. So I ask again: what does Israel – specifically the two NGOs representing Israel, Tevel B’Tzedek and IsraAid – have to gain from spending its manpower and financial resources in Haiti? When it comes to international intervention, long forgotten is the concept “Do unto others what you would want done to you.” It’s all about personal gain, right? 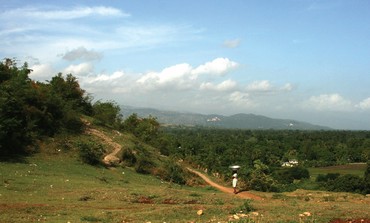 The right question The founder of Tevel B’Tzedek, Rabbi Micha Odenheimer, would disagree. “What does it means to be an Israeli and a Jew in the contemporary world?.... It means engaging, with all the wisdom and empathy we can muster, in creating a more just and beautiful world,” he said.The Talmud says that one should give precedence to the local population only when all else is equal – not if, for example, the poor of your city are fed, but the foreign poor (what we would call those in the developing world) are starving.Micha is one person who would outrightly preach that he is in the business of international mediation, because he was taught to help those less fortunate regardless of personal gain.Political pundits and cynics around the world scoff at the notion of doing good for the sake of doing good. It is unfortunate that our academic analysis, i.e. the analytical jargon we hear from experts, of international development work can only be discussed in terms of incentives, profits and advantages. This strange question of why someone would get involved led me to a personal epiphany.It’s not the “why” that’s important. It’s the “what.”The answer to why we engage with developing nations is only important if we are looking for some sort of fulfilling benefit or profit, financial or other.Why do we help others? If you are untainted by today’s polarized political chatter, then the answer to why you help others should be crystal clear.The fundamentals It is not naivete, ignorance or innocence that guides my thoughts. It’s the actual belief in helping those who have much much less than you do. It is understanding that air-conditioning, a healthy meal and free education are not the norm. It’s about remembering the fundamentals in life, the truly important things, and not taking what you have for granted.Helping those who are less fortunate is the final frontier in becoming a more whole human being. It is what brings you face-to-face with your existential self and reveals character traits that you never knew you even had.It is of no consequence if you personally cannot believe that a country or organization does good just to do good. The bottom line is that the work is being done, and it is inspiring.I joined the Tevel B’Tzedek/IsraAid development team in Haiti for selfish reasons. I came to Haiti wanting another challenge, wanting to explore the world and get back in touch with the fundamentals of life. No warm water, no microwave, no talk of stock markets. Barefoot, in the field, in the jungle. It was all about me, not about helping others.So I went to Haiti looking for a piece of that reality. It took no more than a week for all that selfishness to almost entirely disappear and be replaced with an altruistic fervor. And here’s why. 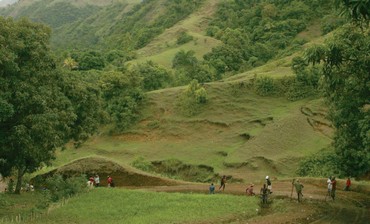 Medical men We have two main projects going on right now in Haiti.The first is a multifaceted medical clinic. During the immediate aftermath of the 2010 earthquake, the clinic was set up to provide the severely lacking medical services needed on the ground. It has grown and taken on a number of different roles: as a education center for Haitian medical personnel who lack training and medical knowledge; a public health facility providing daily lessons on everything from cholera prevention to malnutrition; a center focusing on diabetes and hypertension; and most importantly, a family clinic where people know the doctor, know the nurses and have a file on record.For most of us, a clinic like this is common practice. In Israel, you swipe a card and – Bam! – your entire medical history. Specialists are only a phone call away and medication is covered by insurance.In Haiti, unless you’re rich, that does not exist, is not even close to existing. The Tevel B’Tzedek/IsraAid clinic has become a hub of knowledge, handling those who need special treatment, providing free medication once a patient has paid their visit fees and keeping people’s medical records on file. It’s one of the first in the Leogane community and I hope the future of medicine in the region.

Growing Haiti The second project is a unique initiative started to assist local farmers earn their livelihoods. This is a long-term investment that identifies the demands of the rural population. It is based on a sustainable model and builds the long-term capacity of its beneficiaries. In a word, this is real international development.More than 70 percent of Haitians live off the land, yet their farming practices date back 100 years. Therefore, Tevel B’Tzedek/IsraAid created the “Haiti Grows” Project.The local farmer in our region makes about $150-300 per year. Yes, I said per year. Most of their crops are for subsistence and not for sale. This means they cannot invest in themselves, let alone afford food and clothes for their families. Yet, they have large pieces of land and the right foundations for learning.Our model was relatively simple. It begins with a four-month training course at a 1,000-square-meter plot. Mind you, this plot of land is located in a rural town that itself is located in the middle of nowhere. We bring out a small generator, hold classes with a computer and projector in our makeshift classroom and put those lessons to practice in the field.An Israeli agronomist is brought in to partner with a Haitian agronomist, both of whom lead the classes. All of our development models are training-based. We do not give anything for free, including the service. If we are going to provide a service, a local Haitian must be training with that expert, so that he or she can provide that service once we leave. This clears the way for long-term sustainability. 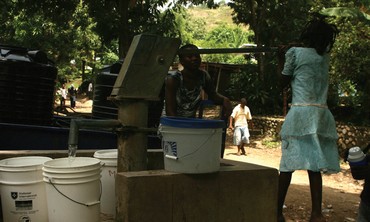 A local focus The field is split up into four sections – lettuce, tomatoes, green peppers and hot peppers. In Haiti, the standard of vegetables is poorer than poor. Quality vegetables are imported in from the other countries. It is pathetic that a country with 70% of its population in the farming industry and huge swaths of undeveloped land, a financially starved economic sector is unable to capitalize on developing its agricultural zone and start exporting fruits and vegetables.So our model is to empower the farmer and to develop a method of farming that is inexpensive yet produces healthy, high-quality vegetables that can be sold to major stores. What does this do? First, it connects the rural farmer to big buyers, thereby giving the farmer a larger cash flow for investment. This also creates jobs in the rural sectors of Haiti, as the farmers will need to hire farmhands. In addition, it allows big buyers to buy local goods, thereby buttressing the local economy instead of spending money abroad.A gravity water-drip system is our chosen method of irrigation. It saves hundreds of liters of water a day, sends the water directly to the roots, is quite inexpensive and – guess what? – can be bought in Haiti, preserving our local-centric, sustainable and replicable ethos.We train the farmers to set up the system, teach them about fertilizers, compost, storage, nursery care and much, much more. We help them to develop a yearlong growing season made up of half a dozen crops, where before they were only growing one or maybe two crops over three to four months.Money matters How, you might ask, can the farmers then afford this entire package of water systems, seeds, tools, etc? Again, the answer comes from within Haiti. We have connected the farmers to a Haitian organization that provides no-interest loans for one year in order to purchase our specially, locally designed farming kit. Keeping in line with our philosophy, the farmer will have to pay it back in one year. This is not a handout. It includes everything you could possibly need to start your own farm. Total cost $900. And remember, the farmers are making between $150-300 a year.With our model, the farmers will be making between $3,000-8,000. Many factors must be taken into account when estimating incomes, including the farmer’s work ethic, plant disease, how many farmhands, etc. So the profit gamut is large. Nonetheless, it is still a profit and big one at that. That is at a minimum multiplying their yearly earnings by 20. They will be able to pay off the loan within six months. Now rural farmers that can barely spell their name are selling to supermarkets and making a killing.This model has been so successful that multiple organizations and now the Haitian President’s Office would like us to replicate it on a large scale. 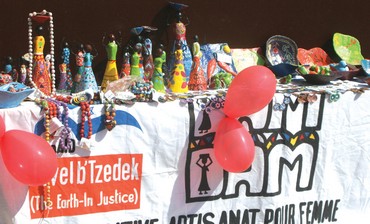 Development philosophy Our philosophy, at least under my auspices, is quite straightforward. No one gets anything for free. Free rides only lead to a situation of dependency and short-term satisfaction.For all of our services, one must either pay a minimal fee or give their time to the project through volunteering. The farmers share the profits with the organization and the community. Of course, all of the profits we make go back into the project.The Haitians we work with are working to help themselves, not us. So they need to invest their time to make the project work. It’s in their best interest and assures their future, not ours. We must teach them how the real world works, that they are not entitled to anything and must work to help themselves. We will be there to assist, train, support and care, but we will not be there to hand out anything.We will bring in methodologies and equipment that have yet to be introduced to the Haitian population. We will make the right connections, provide them with the right tools, teach them the right ways to maximize their own capabilities. In short, we will be there for them, breaking our backs, just as long as they are breaking their backs right alongside.Guy Seemann is the country director for Israel’s development mission to Haiti.
Advertisement
Subscribe for our daily newsletter