Putting the case to rest

The judge considers his verdict in the five-year-long Jesus forgery trial.

By MATTHEW KALMAN
OCTOBER 7, 2010 09:06
THE OSSUARY 311
(photo credit: Courtesy)
Advertisement
The discovery in 2002 of a limestone burial box with the Hebrew inscription “James son of Joseph brother of Jesus” electrified the world of archeology. If genuine, the burial box, or ossuary, would be the only archeological artifact found with a possible direct link to Jesus of Nazareth.Amid international fanfare, the ossuary went on display at Toronto’s Royal Ontario Museum and swiftly spawned numerous articles, scholarly studies, several documentary movies and at least four books. 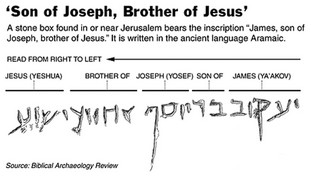 The Aramaic inscriptionBut experts at the Israel Antiquities Authority declared it a modern-day forgery. Israeli police seized the burial box and arrested its owner, Tel Aviv collector Oded Golan. In December 2004 he was charged with faking the ossuary and dozens of other items, including an inscribed tablet linked to King Joash, which, if authentic, would be the only physical evidence from the Temple of Solomon.The indictment leveled 44 charges of forgery, fraud and deception against Golan and 13 lesser counts against a codefendant, antiquities dealer Robert Deutsch. The trial of Golan, Deutsch and three others opened in Jerusalem District Court in September 2005.On Sunday, the defense ended its summing-up with just two men left in the dock, bringing to an end five years of court proceedings that spanned 116 sessions, 133 witnesses, 200 exhibits and nearly 12,000 pages of witness testimony. The prosecution summation alone ran to 653 pages.Yet despite the flood of strong scientific testimony, the feeling in the tiny courtroom, where fewer than a dozen people (including only one reporter) have followed the proceedings, was that the prosecution had failed to prove the items were forgeries or that Golan and Deutsch had faked them.Judge Aharon Farkash, the wheelchair-bound polymath who has overseen the marathon trial, wondered aloud on several occasions how he could be expected to deliver a legal ruling on what was essentially a scientific question that the experts themselves could not resolve.In October 2008, just three years into the proceedings, Farkash pointedly asked whether the trial should continue after the prosecution and Golan had presented their evidence.“Have you really proved beyond a reasonable doubt that these artifacts are fakes as charged in the indictment? The experts disagreed among themselves,” Farkash told the prosecutor.Summing up last March, lead prosecutor Dan Bahat made a startling admission. “If the ossuary had been the only thing on trial, we probably would not have carried on with the process,” he said.Bahat was not even in court to hear the judge wrap up the trial and retire to consider his verdict.Scientists and lawyers have spent months arguing over the patina – a thin crust of material formed by microorganisms that covers all ancient objects. The prosecution accuses Golan of creating a fake patina, which he applied to new inscriptions on ancient objects. Defense experts say there is patina inside the grooves of the inscriptions that could not have been formed in the past two centuries.Golan said he had never faked anything.“I feel that I succeeded to prove that the most important items should be at least 200 years old.They could not be forged because there is ancient, authentic, natural patina which has been developed gradually over at least 200 years in both the James ossuary and the Joash tablet,” Golan said.“They lost the case, there’s no question. On the main issues they were completely wrong. They are not forgeries. It’s not only that they could not prove there was a forgery. With the James ossuary and the Joash tablet, I believe that we proved their authenticity with experts in patina, in geology, in stone, in engraving,” he said.AT TIMES, the courtroom has seemed more like a doctoral seminar than a legal proceeding. The world’s leading experts on archeology, biblical history, Semitic languages, ancient stones and inscriptions, geology, isotopes (both stable and carbon-14), biology, chemistry, microscopy and glue have participated in an often fascinating and sometimes embarrassing collision of scholarship and criminal law.The court has heard from grave robbers, dealers in the shady antiquities market, billionaire collectors and tireless investigators who spend freezing nights in the desert waiting to catch tomb raiders.There have been stories of mysterious Egyptian forgers, cash payments of thousands of dollars in parked cars on West Bank back roads, sting operations at airport customs and warehouses crammed full of priceless ancient artifacts.Judge Farkash said Sunday he would try to plow through all that material and deliver a verdict as soon as possible. It could take several months.The criminal, scholarly and scientific implications of his verdict are immense. If genuine, the artifacts are of historic importance and worth millions. An acquittal would be a severe setback for the Israel Antiquities Authority and its special investigators, who accused Golan and his codefendants of making millions of dollars as part of an international chain of forgers planting sophisticated fakes in the world’s museums. It would also be an acute embarrassment for the isotope experts at the Israel Geological Survey and Prof. Yuval Goren of Tel Aviv University, who spent many days on the stand defending scientific tests they said showed the items must be fakes.A guilty verdict, on the other hand, would destroy the reputation of one of the world’s leading collectors of biblical antiquities and drive the entire Israeli market underground. The Israel Antiquities Authority has made no secret of its desire to shut down the trade in Bible-era artifacts, which it believes encourages grave robbers, who spirit the choicest finds out of the country.Government officials and many scholars say the market is riddled with forgeries, and they are skeptical of any item that does not come from a licensed, supervised excavation where its provenance can be proved. But Golan said he had never seen a forgery that wasn’t immediately obvious and pointed out that some of Israel’s greatest archeological treasures came from dealers. Indeed, the most striking example is one of the most important biblical finds ever: the Dead Sea Scrolls, which a Beduin shepherd sold to an Israeli professor more than half a century ago.This article appeared first on AOL News.(http://www.aolnews.com/world/article/judge-considers- verdict-in-jesus-forgery-case/19659376)
Advertisement
Subscribe for our daily newsletter