By PEGGY CIDOR
MAY 28, 2010 22:47
rabbi arik ascherman 311
(photo credit: Sarah Levin)
Advertisement
On a Friday afternoon two months ago, someone drew my the attention to a man wearing a crocheted kippa at the weekly Friday demonstration at Sheikh Jarrah, and the tone of his remark was rather cynical. “I wonder if he is here for provocation or support,” said the young man standing beside me. A photojournalist standing nearby, recognizing the man, answered, “The most probable provocation you may expect from this guy is that he might be the only one the police will arrest here today.” The man in question, tall and bearded, his tzitzit sticking out of his pants, pacing nervously and talking on his cellphone, was Rabbi Arik Ascherman, executive director of Rabbis for Human Rights. RELATED:
And (religion and) justice for all?Since the onset of the weekly demonstrations by left-wing Israelis protesting against the Jewish residents who moved into the houses evacuated by their Arab inhabitants about six months ago, Ascherman has become a prominent figure among the demonstrators. The houses were recognized by the High Court of Justice as legal Israeli property, which sanctioned the eviction of the Arab families who had been living there since 1948. Ascherman believes that even if the seizure of the properties is legal, the eviction of the families, which include children and the elderly, who are now forced to live in tents, is contrary to Jewish ethics. Ascherman was not arrested that day, but he was detained by the police two weeks ago, spent Shabbat at the police headquarters at the Russian Compound and was ordered to stay away from Sheikh Jarrah for the next three months. Ascherman is well aware of the modest place of his organization – and of the religious Left – in the protests, be it Sheikh Jarrah or other human rights issues in this context. Nevertheless, he points out in an interview last week with In Jerusalem, “It’s so obvious to us that we’re doing this out of religious motivations. For example, in our press releases or in the signs we carried during the large demonstration on Jerusalem Day at Sheikh Jarrah, we conveyed religious messages.” Born in Erie, Pennsylvania, Arik Ascherman is a Reform rabbi, married to Einat Ramon, who was the first Israeli-born Conservative woman to be ordained as a rabbi. They live in Jerusalem in the Katamonim and have two children. From 2005 to 2009, Ramon was the dean of the Schechter College for Jewish Studies.Wherever there is a human rights crisis, Ascherman is on the scene, be it helping to rebuild a demolished Palestinian house in east Jerusalem, protesting against the harsh policy towards the unemployed in the now-defunct Wisconsin program or, more recently, at the Sheikh Jarrah demonstrations. He has been arrested more than once, and the sight of the tall, bearded, blue-eyed rabbi who speaks Hebrew and Arabic with the same distinctly American accent has long been a part of the local landscape.Jewish religious messages in human rights activism can be a painful experience for religious activists. After all, they are a minority.Judging by the men who participate at the Sheikh Jarrah demonstrations, I do see more kippot there than I have seen at any other activity or demonstration that we’ve been involved in for the past 15 years. So religious Jews are no longer suspected of being extremists because they wear a kippa? It’s true that historically many people who were highly motivated and felt almost 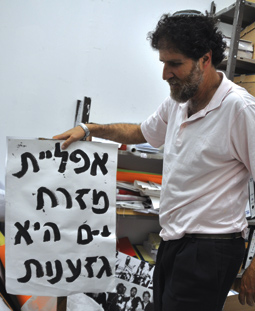 discriminated against in left-wing progressive movements in this country, or even felt like suspects, still feel this is not enough. In 1995, at the demonstration where Yitzhak Rabin was assassinated, and even before the assassination, people were looking at us with our kippot and beards, and I could see they were sure we were instigators. There was a time when, systematically, every demonstration would start at an hour on Saturday evening when observant Jews couldn’t attend.But now I can say that has changed. But I would say that if our first mandate, as Rabbis for Human Rights, is to address human rights abuses among the Palestinians, then I think our second mandate is to introduce into people’s intellectual universe another way of understanding Torah, which is very different from the stereotypes that many non-religious Israelis have of what Judaism is about. It is exactly there that our public human rights activity lies. We have a whole education department and many publications that bring to the forefront the connection we see between Judaism and human rights. Some members of RHR and other religious left-wingers don’t feel comfortable sharing a common struggle with radical non-Zionist leftists. Are you comfortable?I am totally aware of this aspect, but I’m much more concerned about the common issue of the injustice perpetrated against Palestinians in east Jerusalem than whether our partners are Zionists or non-Zionists. And in any case, about 99 percent of our members describe themselves as Zionists.Still, in the big demonstration held a month ago on a Saturday night, people felt outraged to find themselves among radical non-Zionists, even some anti-Zionists. I know that some people who strongly identify with the struggle felt very uncomfortable there because of the presence of a large representation of non-Zionists. Did you feel it was less important than being there and protesting the injustice? I guess they think that this is going to destroy the Israeli Left if it becomes a non-Zionist movement. But really, that’s beyond us. Let’s be honest here. The Israeli Left is almost nonexistent today, and I don’t see us as Left or Right. But for those who may raise concerns, I’d say they should be grateful that somebody is reviving something on that side of the political spectrum rather than worry about what this is going to do in terms of the involvement of people. I don’t think that is the real issue. Some of the people there don’t really have respect for the Israeli justice system.I have more faith, let’s say, that some justice could be obtained through the Israeli court, for example, than some other people I work with at Sheikh Jarrah. Although I have to admit, though, that in this particular case, a lot of what we consider to be injustice was ruled by the court. So maybe you should be demonstrating in front of the High Court of Justice and not in Sheikh Jarrah?Some people suggested that, and we talked about it; it was even mentioned in a lot of 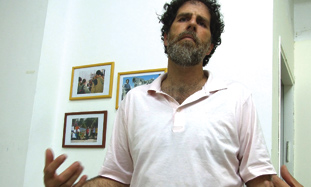 the press releases that we published. In fact, I’m very pleased that on [Israel Radio’s] Reshet Bet, every week when they report on the demonstrations, they mention that we are demonstrating against the High Court’s ruling.Nevertheless, I have total faith in the system. I am willing to give it a chance to redeem itself, more than some others are willing to. And I certainly have great faith in the basic goodness of my fellow Israelis which, I think, some of the non-Zionists there may also have. Would you say that this issue of being Zionist or not is not the major issue?There is another debate taking place in the progressive circles, which is whether change is going to come from within or from without. My feeling is very strong that (a) it’s impossible for change to come solely from without, and (b) that there is goodness in my fellow Israelis. I think it’s also very significant that in the end, at what was originally billed as the Zionist Left demonstration that Saturday night, what came out was that we ultimately have the same interests. And although I may be the most high-profile person in this regard, there were plenty of others involved in this struggle who felt like Zionists as well. But aren’t you, after all, a small minority? Do you think you can bring about substantial change? I don’t want to give the false impression that I am some kind of last Mohican there. As I said, I see more and more participants who wear kippot. In terms of the role of religion, that is an important issue; but what RHR is doing is trying to determine how much to put our religious motivations and sources in front and center. On one hand, it’s so obvious that we’re doing this out of religious motivation. On the other hand, when you get into the details of the Wisconsin plan or whatever cause it is, or when you only have a few seconds to speak to an MK or a reporter or whatever, sometimes you cut to the chase. And when you do that, the religious thing gets thinner.So we try, like when we submit a High Court petition, to always include a reference to Jewish moral standards, legal arguments, something from Mishpat Ivri [Jewish law]. And without a doubt, when we send out a press release, we try to include that. Also at Sheikh Jarrah, when we were there with signs on Jerusalem Day, some of them had religious messages. What is the most important thing you want to achieve through your activities?Our goal is to restore hope. We and the Palestinians are very symmetrical in two ways. First of all, we also deeply feel ourselves the victims. And we are outraged at anyone’s suggesting that we are victimizers. “I’m the victim – how dare you say that I’m a victimizer.” Not understanding that you can be a victim and a victimizer at the same time, and sometimes the difference between them is less than a hair’s breadth. We also both deeply want peace, and the other side doesn’t want it, of course. And this you achieve through demonstrations at Sheikh Jarrahand rebuilding Arab houses demolished due to lack of permits?Part of the empowerment is by breaking down the stereotypes. How manytimes when I was helping rebuild a demolished house did the parentscome to me saying, “We want our children to meet you. Our 10-year-oldchild has just seen his house demolished by Israelis, and he ishumiliated. So when he says he wants to be a terrorist, we can tell himthat not all Israelis demolish homes, that there are Israelis who cameto help rebuild our homes.”So it’s also about showing another face of the Israelis? On the Palestinian side, the worst stereotype they have about Israelisis about religious Israelis. For most Palestinians, a religious Israeliis a violent, fanatic settler. And many times, people see me at firstand say, “What’s this guy doing here?” But I think by our presence,working very clearly as religious Israelis, with kippot and everythingelse (that identifies us as religious), we’re breaking down a lot ofstereotypes. And that is something we have to do among both Israelisand Palestinians.
Advertisement
Subscribe for our daily newsletter