By LAHAV HARKOV
JULY 19, 2012 16:48
weekly schmooze 311
(photo credit: Courtesy)
Advertisement
Not many unions can boast that not only were they shorter than Kim Kardashian and Kris Humphries' 72-day marriage, but they were as big a spectacle that fascinated and confounded just as many people. Kadima leader Shaul Mofaz's short-lived (71 days) coalition with Prime Minister Binyamin Netanyahu definitely has bragging rights. Tablet Magazine compared the mega-coalition and the Kardashian wedding, declaring KK and BB the winners. 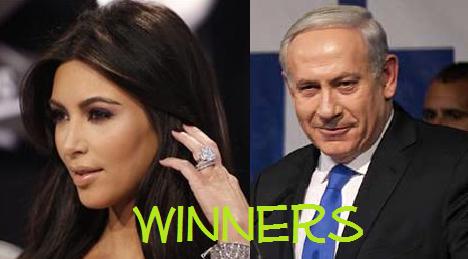 (Photos: Reuters; Design: Lahav Harkov)When a celebrity visits Israel, the local press and paparazzi go wild. When five of the biggest action stars come – who knows? We'll find out on August 8, when Bruce Willis, Sylvester Stallone, Jean-Claude Van Damme, Dolph Lundgren and Jason Statham attend the Israeli premier of their new film Expendables 2. No word yet on whether other stars Jet Li, Arnold Schwarzenegger, Chuck Norris and, uh, Miley Cyrus's boyfriend Liam Hemsworth will be jetting to the Holy Land. Perhaps the stars of Oz the Great and Powerful can be convinced to visit Israel. After all, it very well could be the most Jewish film of the year – if we're judging by proportion of Jewish to gentile stars. James Franco stars as Oscar Diggs, a.k.a. The Wizard, who reaches the Land of Oz, where he meets three witches. Two out of three are played by Jewish actresses – Mila Kunis and Rachel Weisz. Plus, director Sam Raimi is also a Member of the Tribe.One of the witches of Oz, Mila Kunis, is also starring in a new ad campaign for Miss Dior, with a retro look that channels Audrey Hepburn and Jackie O. 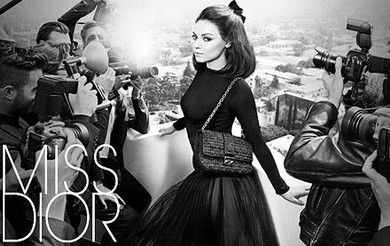 Miss Dior
(Courtesy Dior)Meanwhile, Kunis' Black Swan co-star Natalie Portman is also shilling for Dior in ads reminiscent of the same era, donning a formal gown and dancing in a fountain, as a tribute to the famous scene from director Frederico Fellini's La Dolce Vita. Only paparazzi photos are available from the shoot – ironically enough, since the term "paparazzi" originates in La Dolce Vita – but here's the scene just for fun:The Weekly Schmooze collects the hottest Jewish culture news from around the world. Ranging from celebrities to philanthropy to quirky communities, we're here to schmooze about Jews. If you have any news to share with The Weekly Schmooze, write to:weeklyschmooze@gmail.com