This Week in History: The first Wikileak?

One of the most consequential diplomatic cables ever to be published, the Zimmerman Telegram pushed the United States into World War I.

By MICHAEL OMER-MAN
MARCH 4, 2011 08:53
Zimmerman Telegram 311
(photo credit: US National Archives)
Advertisement
On March 1, 1917, a secret diplomatic cable that would alter the course of World War I and inevitably of modern history was published for public consumption. The Zimmerman Telegram was a cable from German Foreign Secretary Arthur Zimmerman to Germany’s ambassador in Mexico, containing instructions for a proposed Mexican-German alliance in case the United States eventually entered WWI. Although the telegram was not the sole catalyst that brought the US into “the war to end all wars,” it was the last straw in a series of events that eventually led to hundreds of thousands of American troops being shipped across the Atlantic.In the first years of WWI, the United States was resolutely uninterested in involving itself in foreign wars. Still largely guided by the Monroe Doctrine, which forbade on principle European intervention in the Western Hemisphere and vice versa, the US was opposed to any involvement in internal European affairs. Although vexed by German submarine warfare in the Atlantic, the Sussex Pledge of 1916, in which Germany promised to restrict its naval attacks, sufficiently placated the United States, ensuring its neutrality in the war.RELATED:
This Week in History: IAF shoots down Libyan Flight 114
This Week in History: The capture of Eli CohenIn early 1917, however, the German Empire reneged on the Sussex Pledge and reinstituted its tactic of unrestricted submarine warfare. Less than a month before resuming its attacks on merchant and passenger ships, the German foreign minister began preparing for the likelihood that such a move might push the US into the war; Zimmerman sent a cable to his ambassador in Mexico with instructions to make a bold offer to the Mexican president.If and when the United States entered WWI, the ambassador was to offer financial support and backing for a Mexican declaration of war against the US. In an alliance Zimmerman described as “make war together, make peace together,” the Germans promised that Mexico would be given its lost territories of Texas, Arizona and New Mexico at the end of the war. Additionally, Mexico would be asked to enlist Japan into the German alliance. The coded telegram was meant to reach only the German ambassador to Mexico but only a few weeks later, would be read by millions and significantly contribute to the deflating German defeat.On January 17, British intelligence intercepted a German telegram ciphered using a brand new code that they could not break. In a twist of fate, Zimmerman’s embassy in Mexico had not yet received the new code being used by Germany. The telegram had to be deciphered at the German embassy in Washington and then relayed once again in a code that both its Mexican mission (and the British) could understand. Finally able to decipher it, the British immediately recognized the impact the cable could have on America’s readiness to join the war. More than a month, however, would pass before Britain shared the explosive cable with US President Woodrow Wilson.Wary of exposing their signal intelligence capabilities to the Germans, the British waited until they were able to acquire a slightly altered, Mexican version of the cable before presenting it to the Americans. By doing so, they successfully convinced Germany that the telegram was leaked by an embassy employee in Mexico and not, as was actually the case, intercepted and deciphered. On February 23, 1917, the Zimmerman Telegram was presented to the US ambassador in London, who passed it along to the US president two days later.On March 1, 1917, then-president Wilson decided to release the Zimmerman Telegram for publication in the news media. The American public and many media outlets initially suspected that the telegram was a British forgery intended to draw the US into the war. Their suspicions were put to rest several days later when Zimmerman himself gave a speech, personally verifying the authenticity of the telegram bearing his name. Faced with mounting casualties of unrestricted submarine warfare and incontrovertible evidence of German intentions to intervene on the North American continent, Woodrow Wilson asked Congress to declare war on Germany. The United States and Germany were officially at war four days later.Both Mexico and Japan immediately rejected the offers contained in the Zimmerman cable and therefore, there was never any real threat posed to the United States by the cable. However, just the idea that a European power was willing to incite and support Mexico in a war against the US, quickly led to Washington’s entrance into WWI. In this context and considering the effect that American participation had on the outcome of WWI, the Zimmerman Telegram – quite possibly the first Wikileak – was perhaps the most consequential of any compromised diplomatic cable in modern history. 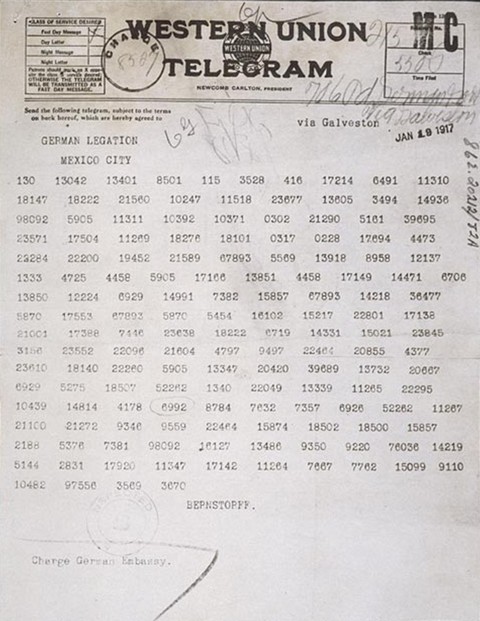 (coded version of the Zimmerman Telegram) 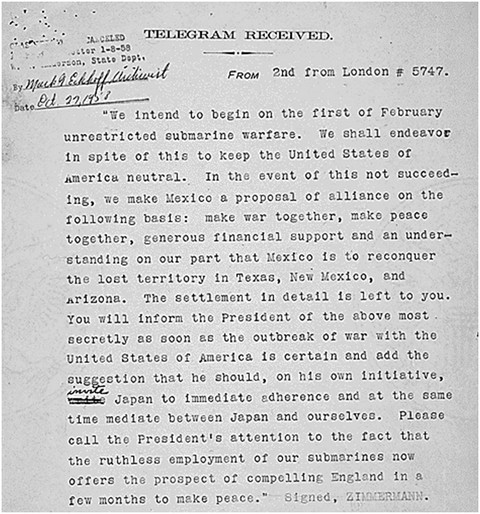