Come to the Table: Jerusalem, live in the kitchen

There's so much splendid cuisine in the Holy City; transport yourself there with these Jerusalem-inspired recipes.

By GAYLE SQUIRES
Jerusalem: a cookbook
(photo credit: Gayle Squires)
Advertisement
An Israeli and a Palestinian living in England wrote a cookbook about Jerusalem. Authors Yotam Ottolenghi and Sami Tamimi, born in the same year on opposite sides of the city, make a dynamic duo. They met in London, and, over a decade ago, founded the eponymous restaurant that grew into a small chain and spurred three cookbooks. Jerusalem: A Cookbook, published last month, is their most recent venture. Not merely a cookbook, it is a beautifully photographed chronicle of a journey home, in which Jerusalem plays the starring role.To fully appreciate this trip to Jerusalem, it helps to study the two cookbooks that preceded it and the photographs and text that give shape to each one’s theme.The pair’s first collaboration, Ottolenghi: The Cookbook, was initiated by restaurant customer demand and contains mostly menu favorites. The book establishes the authors’ food philosophy: “Like the market vendor, we make the best of what we have and don’t interfere with it too much. We keep foods as natural as possible, deliberately avoiding complicated cooking methods.” This is evidenced by the colorful photographs that accompany over half the recipes in the book. Each one demonstrates how this technique keeps ingredients as close as possible to their origins, eschewing tiny brunoise dicing to allow each individual element to shine. All non-food pictures create a portrait of the restaurant family, from cooks to servers to customers to window-peering passersby. Plenty, a collection of recipes from Ottolenghi’s The New Vegetarian weekly column in The Guardian,shapes itself around one key ingredient in each recipe. The full-page pictures highlight the food and the food only, with simple plates, monotone backgrounds, and not a distracting cute cup or funky napkin in sight. Case in point, the cover of this second book shows eggplant with buttermilk sauce: two roasted eggplants, split lengthwise on an off-white dish, lightly covered with a creamy sauce and a sprinkling of pomegranate seeds. I suspect that the photographs are what pushed PIenty to nearly cult status.Drawing upon the success of Plenty, Jerusalem’s recipe photos are also barely-adorned vibrant one-pagers, presenting the food in its unadulterated glory.  But it’s the almost 50 pictures of life in Jerusalem – from markets to bus stops to denizens spanning the religious and ethnic spectrum – that tell the real story. It’s as if the city itself is the not-so-silent third author. Not only does the book’s introduction include a several-thousand-year history of the region, it dedicates several pages to more sensitive issues: “the passion in the air”- with its positives and negatives – and the inability to trace recipe ownership to a specific ethnicity or group.And nearly every Jerusalem recipe has not one, but two, introductory paragraphs. As is common in most cookbooks, one italicized introduction describes the dish, suggests accompaniments, and provides preparation hints. Unique to Jerusalem, though, is the recipe preamble – the story of how the food relates to the city – which can sometimes be longer than the recipe itself. For example, in Ottolenghi, char-grilled cauliflower with tomato, dill and capers is introduced, “Like broccoli, cauliflower can be rather dull. So here we give it the classic Ottolenghi treatment…” But in Jerusalem, the preamble to fried cauliflower with tehina says, “This dish is usually served in the context of a large meze assortment, laid out on the table at the beginning of a substantial meal… It is hard to overstate how deeply rooted [communal eating] is in the culture and the temperament of Jerusalem and the wider region.”With all this talk about the books, it’s about time we got to the food itself.I’ve prepared a handful of recipes from each book, and the dishes taste as bright and striking as they look on the page. Jerusalem draws on the rich tapestry of the city’s diverse cuisine and emphasizes recipes centered on seasonal ingredients and common to most home kitchen. Aside from the well-known staples like hummus and simple chopped salads of cucumber and tomato salad, there are fried tomatoes with garlic, parsnip and potato latkes, and quince stuffed with lamb. Desserts are often syrup-soaked, like sweet nut-filled filo cigars, semolina cake with orange blossom water, and malabi milk pudding. Reflecting the entire Jerusalemite population, there are also several shellfish recipes, though I couldn’t find any pork. The flavors are bold and strong; central to most recipes is lemon and garlic, and lots of it. And it’s worth a trip to a Middle Eastern grocery store for some of the other commonly-used ingredients: pomegranate syrup, silan date honey, orange blossom and rose waters, tehina sesame paste, sumac spice, and za’atar. With no travel plans to Jerusalem on the horizon, I plan to bring the city into my kitchen. My copy of Jerusalem is already crumb covered, and I’ve dog-eared the tomato and sourdough soup, braised chicken sofrito, lamb kofta meatballs, and chocolate kranz cake (better known as babka). I’d encourage you to invite Jerusalem and its flavors into your kitchen too.

RecipesBoth of these recipes have a tehina-based sauce. Make sure to refrigerate your tehina after opening because it can go rancid quickly (the same is true of sesame and nut oils). If the tehina separates, heat it up slightly to make it easier to mix. When you first add liquid to the tehina, it will thicken but quickly loosen up as you stir. Add enough liquid so sauce is about same consistency of honey. I’ve been told the most authentic brand you can buy outside of Israel is Roland.

Roasted cauliflower with tehina
Serves 8 as a side dishAdapted from Jerusalem: A Cookbook. The original recipe calls for frying the cauliflower, but I simplified it with a quick roast in the oven. I made it with multicolored cauliflower, having found purple, green, and yellow varieties in the grocery store. This makes a lot of dressing. I had enough left over after five heads of cauliflower to drizzle over a few more brassica vegetables – a head of broccoli and a few kale salads. Feel free to make only half of the dressing. 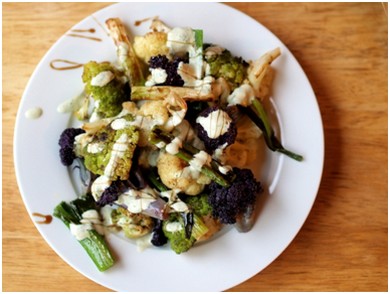 Prep. Trim the end of each cauliflower and then quarter them through their cores. Cut out the cores and then break the vegetable apart into bite-sized florets. Cut the scallions in 2- to 3-inch pieces. Roughly chop the parsley and mint – you’ll need ¼ cup of each for the dressing; reserve any extra for garnish.
Mince the garlic.  Zest one lemon. Juice both lemons – this should yield a little over ¼ cup. Toss. Toss the cauliflower in a bowl with three tablespoons of olive oil, a few pinches of salt, and a few grinds of pepper.Roast. Line a baking sheet with parchment paper or foil. Spread the cauliflower on the pan in a single layer and roast in the oven for 30-35 minutes until the cauliflower is crisp and parts of it have turned golden brown. Transfer to a large bowl to cool. 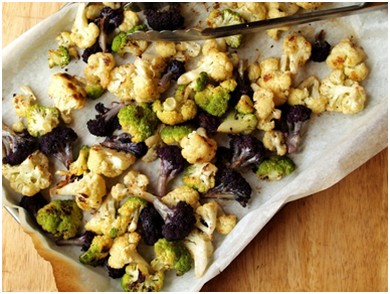 Saute. Heat up the remaining tablespoon of oil in a small pan. When the oil is shimmering, add the scallions and sauté for about five minutes until they begin to color. Transfer to a bowl to cool.

Whisk. Spoon the tehina into a bowl and mix in the  yogurt, garlic, herbs, lemon zest, ¼ cup of lemon juice, pomegranate molasses. Slowly pour in the water, whisking with each addition. Only add enough water to get  the sauce to a thick, smooth pourable consistency, similar to honey. Taste a floret dipped in the sauce, and season with salt, pepper, and lemon juice. Serve. Mix the vegetables with the sauce. Drizzle with pomegranate molasses and any leftover parsley or mint.Roasted butternut squash and red onion with tehina and za’atar
Serves 4 as a side dishAdapted from Jerusalem: A Cookbook.The combination of roasting and za’atar give the dish a smoky flavor. Feel free to experiment with other types of squash and pumpkin – just adjust the roasting time accordingly. 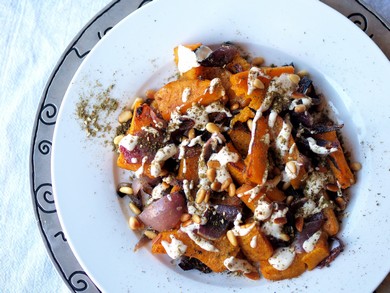 -    1 large butternut squash (about 2 – 2 ½ lbs)
-    2 red onions
-    4 tablespoon olive oil, divided
-    3 heaping tablespoon tehina
-    1 lemon for juice (approximately 2 T)
-    1 tablespoon water
-    1 clove garlic
-    3 tablespoons pine nuts
-    1 tablespoon za’atar
-    1 tablespoon coarsely chopped parsley (optional)
-    Salt and pepper to tastePreheat oven to 246˚C.Cut. Peel and seed squash, and cut into thin (3/4–inch) wedges approximately 2-inches long. Cut the onions into 1-inch wedges.Mix. In a large bowl, toss the squash and onions with three tablespoons of oil, and  sprinkle with a few pinches of salt and a few grinds of pepper.Roast. Line a baking sheet with parchment paper or foil. Spread the vegetables on the sheet and roast in the oven for 30-40 minutes. They’re ready when they start to brown and are tender. The onions will probably cook faster than the squash, so check and remove them early if necessary so they don’t burn. 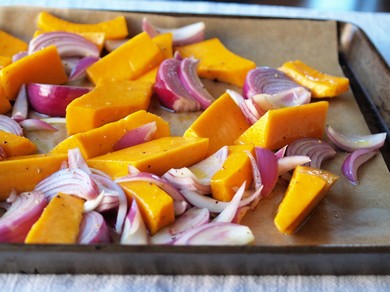 Whisk. While the vegetables are roasting, place in a bowl the tehina, 1½ tablespoon lemon juice, water, and minced garlic. Whisk until the sauce is the consistency of honey, adding water or tehina if necessary. Taste for seasoning and add salt, pepper, and more lemon juice if you’d like.Toast. Heat the remaining 1 tablespoon of oil in a small pan over medium-low heat. Add the pine nuts with a pinch of salt and cook for 2-3 minutes until the nuts start to brown. Remove from the heat and transfer the nuts into a small bowl to stop the cooking.Serve. To serve, spread the vegetables on a platter, drizzle with tehina, and sprinkle with za’atar, pine nuts, and parsley (if using). I like to eat this at room temperature.

Gayle Squires publishes recipes and photographs on the blog, Kosher Camembert. Her cooking and baking is inspired by international travel .Follow @JPost_Lifestyle
Advertisement
Subscribe for our daily newsletter