Weight Watch: Cutting down on fat

A new cookbook teaches people how to enjoy a daily treat without breaking their diet.

By NERIA BARR
Cutting down on fat
(photo credit: courtesy)
Advertisement
‘Everyone tries to avoid eating calorie-rich treats, but is it reasonable to go through life without enjoying them?” asks Revital Federbush, a journalist covering health and nutrition issues. She has been been developing recipes for more than 10 years and recently published a cookbook entitled Naturally Up to 160 Calories: Everyday Delicious Treats.In her book, Federbush quotes studies showing that most diets fail because ultimately people crack and eat what they love anyway. She concludes that the only way to keep the weight off is by enjoying a daily treat that has fewer calories and less fat but does not contain artificial sweeteners, egg substitutes or other unhealthy ingredients.“With innovative preparation and baking techniques, you can make reasonably sized treats (the size of a muffin, cupcake or two large cookies) with no more than 160 calories – an amount that is easy to incorporate into any balanced nutritional diet, even if the aim is to lose weight,” writes Federbush in the book’s introduction. An important tip she gives is to cut down on fat rather than sugar.“The recipes were inspired by my own personal diet pitfall,” writes Federbush in the introduction. She insists that “the most fattening ingredient in a cake is the fat. One gram of fat is equal to nine calories.”But fat plays an important part in forming the texture of baked goods. So she experimented and came to the conclusion that “If you use the correct ratios of healthy fat substitutes, such as Greek yogurt, applesauce and orange juice, you can achieve similar results.”The following recipes and photos are from the book (available at Amazon.com).PAVLOVA
Yield: 6 Pavlovas
1 Pavlova = 160 calories 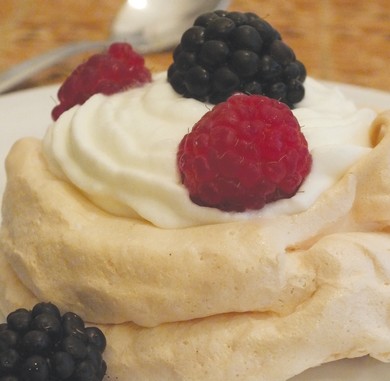 For the Pavlovas:
✔ 2 extra-large egg whites
✔ Pinch fine salt
✔ 1⁄4 tsp. white vinegar
✔ 1⁄2 cup granulated sugar
✔ 1⁄4 tsp. vanilla extract
✔ 11⁄2 tsp. cornstarch (corn flour) For the cream:
✔ 1⁄2 cup heavy cream (double cream)
✔ 11⁄2 Tbsp. granulated sugar
✔ 1 tsp. instant vanilla pudding
✔ 3⁄4 cup fresh berries (or any other fruit) Preheat oven to 130º. Line a baking sheet with parchment paper. Combine egg whites, salt and white vinegar in the bowl of an electric mixer and beat at high speed until soft peaks form. Add the sugar, a little at a time, and continue to beat until the egg whites hold very stiff peaks. Add the vanilla extract, sift in the cornstarch and fold with a rubber spatula.Spoon the meringue in 6 big spoonfuls, using a spoon to spread them in a circle, and then make an indentation in each one. Bake for about 2 hours. Turn off the heat and cool the meringues in the oven for 1 hour, propping the door open with a wooden spoon.Meanwhile, place the heavy cream, the remaining 11⁄2 Tbsp. of sugar, and instant pudding in the bowl of your electric mixer. With the whisk attachment, whip the cream until soft peaks form. Do not over beat.Just before serving: Evenly distribute the cream on the meringues, filling in the indentations. Top with berries and serve.TRIFLE
Yield: 12 trifles
Per serving: 1 trifle = 154 calories 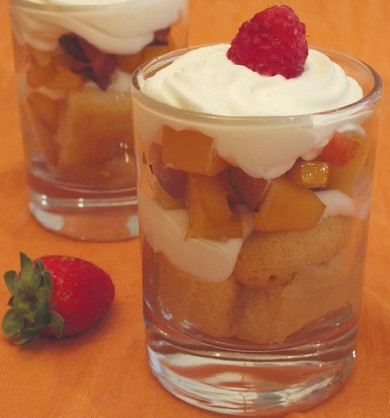 For the whipped cream:
✔ 1 cup cream (240 ml.)
✔ 1⁄4 cup low-fat cream or 5% white cheese
✔ 1⁄4 cup milk (1% fat)
✔ 1 Tbsp. instant vanilla pudding
✔ 4 Tbsp. granulated sugar For the trifle:
✔ 18 ladyfingers
✔ 1⁄2 cup orange juice
✔ 11⁄2 cups fruit salad made from your favorite fresh fruit chopped into small pieces (cherries, strawberries, peaches and raspberries are all very nice)
✔ Special equipment: 12 240-ml. dessert cups In the bowl of an electric mixer, beat heavy cream, yogurt, milk and instant pudding until soft peaks form. Sprinkle the sugar over the cream, and beat until soft peaks return. Do not overbeat.For each individual trifle, dip the ladyfingers in the orange juice for a second and cut in half. Lay 3 halves of ladyfingers at the bottom of each dessert cup, followed by fruit, then top with the whipped cream.Cover each cup with plastic wrap and place in the refrigerator for at least four hours, preferably overnight, to allow the layers to blend.Serve cold. Trifles can be refrigerated up to 2 days in airtight containers.STREUSEL APPLE MUFFINS
Yield: 16 muffins
1 muffin = 149 calories 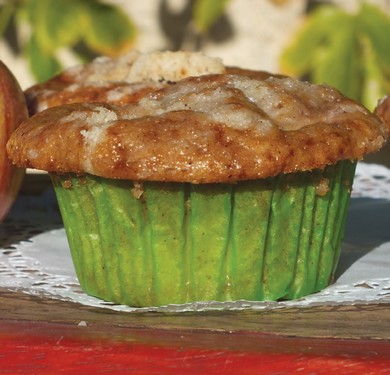 For the streusel topping:
✔ 2 Tbsp. all-purpose flour
✔ 2 Tbsp. granulated sugar
✔ 1/2 tsp. baking powder
✔ 1/2 tsp. cinnamon
✔ 1 Tbsp. unsalted butter For the muffins:
✔ 1 cup unsweetened applesauce
✔ 11⁄2 cups all-purpose flour
✔ 11⁄2 tsp. baking powder
✔ 1⁄2 tsp. baking soda
✔ 1 cup granulated sugar
✔ 1 tsp. ground cinnamon
✔ 3 extra-large eggs, 240 calories
✔ 3⁄4 cup light cream or 5% white cheese
✔ 1⁄2 tsp. finely grated lemon zest
✔ 1⁄2 tsp. fine salt
✔ 1 tsp. vanilla extract
✔ 4 cups apples, peeled, cored and cut into 1⁄2-cm. slices, about 480 gr.For the streusel topping, combine the flour, sugar, baking powder and cinnamon in a small bowl. Cut the butter into small pieces and blend into the flour mixture with a pastry blender or a spoon to form crumbs. Refrigerate at least 30 minutes before using.Preheat oven to 175º. Line standard muffin tin with baking cups and spray with nonstick spray. Puree the applesauce in a blender or a food processor (the applesauce must be finely pureed and smooth), and then measure 1 cup.Sift the flour, baking powder and baking soda into a large bowl. Mix in the sugar and the cinnamon. In another large bowl, whisk together eggs, yogurt, applesauce, lemon zest, salt and vanilla.Add the wet ingredients to the dry ingredients, and fold in the apples. Stir just to combine (do not over mix, or you will have tough muffins). Use an ice cream scoop to distribute the batter evenly among the baking cups, filling each one three-quarters full, then sprinkle the streusel topping evenly.Bake for approximately 25-30 minutes or until a toothpick tests clean or with a few crumbs (do not overbake, or you will have dry muffins). Cool in the pan for a few minutes before removing to a cooling rack. Muffins can be stored up to 2 days at room temperature in airtight containers. 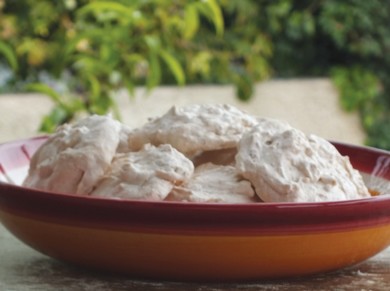 Brutti ma buoni is a delicious Italian cookie that, roughly translated, means, “ugly but good.” What I like about them is their delicious nutty-sweet taste and big size.✔ 1 cup chopped hazelnuts
✔ 2 extra-large egg whites
✔ 1⁄2 tsp. salt
✔ 1 cup granulated sugar
✔ 11⁄2 tsp. vanilla extract Preheat oven to 150º. Line baking sheets with parchment paper, and spray with nonstick baking spray. Place the hazelnuts on a separate baking sheet and bake for about 5 minutes or until fragrant. Remove from oven and let cool.Combine egg whites and salt in the bowl of an electric mixer (the bowl and the beaters must be clean and free of grease) Beat at medium-high speed until soft peaks form (about 4 minutes). Add the sugar, a little at a time, and continue to beat until the meringue holds very stiff peaks. Beat in the vanilla extract and then fold in the chopped hazelnuts.Use an ice-cream scoop or heaping tablespoonfuls to place dough about 5 cm. apart onto prepared baking sheets. Bake cookies for 30 minutes. Remove from oven and turn the oven to 120º. When the oven reaches that temperature, place the cookies back in the oven and bake for another 30 minutes. Remove from the oven and let cool to room temperature. Cookies can be stored up to 2 days at room temperature in airtight containers.For more information, go to Revital Federbush’s blog: www.naturally-up-to.comFollow @JPost_Lifestyle