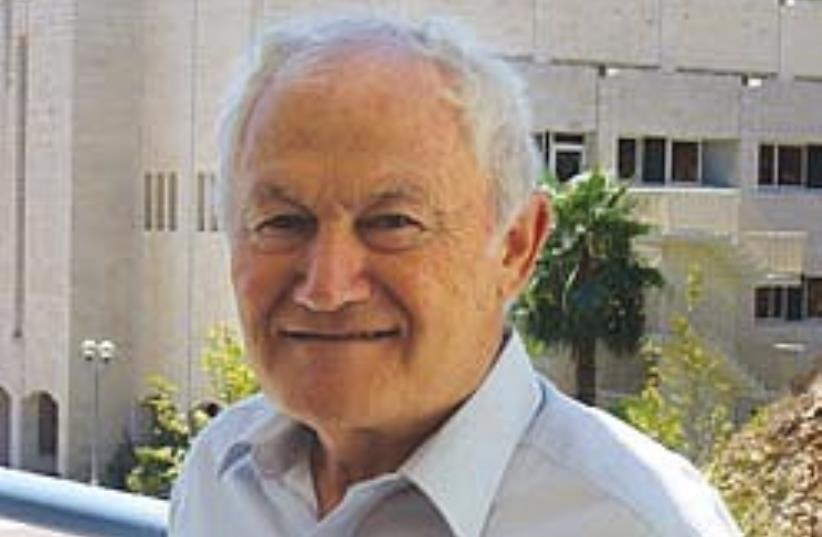 Prof. Joseph Bodenheimer
(photo credit: Judy Siegel-Itzkovich)
Advertisement
When the visionary, Vienna-born physicist Prof.Ze'ev Lev (William Low) established the Jerusalem College of Technology(JCT) 40 years ago with seven engineering students in an apartmentbuilding in the Bayit Vegan quarter, he dreamed of the day when therewould be 400 or 500 students. Those familiar with his dream of teachinghigh-level science and engineering combined with Torah to modernOrthodox and haredi men doubt that Lev actually believed such a goalcould be reached.

Lev somehow foresaw that this combination wasexactly what 21st-century Jerusalem would need to fight the decline inthe number of modern Orthodox residents, the high poverty rate, theminimal levels of secular education in haredi families and thecapital's need for a strong technological base.

When Lev's former physics student at the Hebrew University,Prof. Joseph Bodenheimer, was named JCT's fourth president 16 yearsago, that target had already been achieved, with 440 students in sixbuildings on the Givat Mordechai campus. Today, as he hands over thepresident's chair to eminent French-born mathematician Prof. NoahDana-Picard, there are 3,000 students on campuses in Jerusalem andRamat Gan, and 17 buildings on the main Givat Mordechai campus alone.

WHEN I interviewed him in 1993 upon his promotion from JCTrector to president (as I have interviewed the three presidents beforehim), I was impressed to find Bodenheimer sitting in the secretary'sroom rather than that of his predecessor, Dr. Yitzhak Nebenzahl (whoneeded the larger room due to a physical disability). Bodenheimerexplained that the very pinched financial situation of the collegerequired the president to serve as an example of modesty, so heremained in the small room, with its simple office furniture, for 16years. "It is very satisfying when a new student tells me that hisfather studied here," he says.

Born in Cambridge, he moved with his parents toLondon during World War II and then in 1950 to Israel, where his fatherworked as an analytical chemist. After religious high school studiesand military service, he was offered a prestigious Fulbright fellowship- one of three in Israel among 300 candidates - but Bodenheimer washesitant to spend four years in the US. His father sent him to Lev atthe Hebrew University for advice.

"He said that if I was good enough to win a Fulbrightfellowship, I should go to HU, which was as good as any US university.I could always do post-graduate work in the US, Prof. Lev insisted." Inthe end, Bodenheimer earned all three degrees at HU and didpost-doctoral work at the Kings College in London, where he studiedelectrooptics during its early years as a discipline.

After his return with his wife and threechildren, "Prof. Lev called me into his HU office and said he wasopening a unique new institution and that he wanted me to set up thephysics lab. He was concerned that I might not find a position hereafter my work abroad, as there were very few available job slots. Hewas intent on enabling national religious and haredi yeshiva studentsto study engineering in a Torah framework."

SURPRISINGLY, all the leading rabbis gave their approval afterLev - "a genius and an incredible thinker" - agreed to call thereligious studies component a beit midrash rather than a yeshiva, and since then, no rabbinical prohibitions or boycotts have ever been declared against JCT.

"Machon Lev" had a hard time cobbling together the necessary labequipment (some was borrowed from HU), and held classes in a nearbyyeshiva high school. By the time it moved to the Givat Mordechaicampus, Bodenheimer was a senior lecturer in electrooptics and hadheaded the department for eight years. The college was initially rununder the aegis of Bar-Ilan University, which awarded its own degreesuntil the Council for Higher Education authorized JCT to issue its ownbachelor's of science degrees in 1977. Undergraduate students learnfrom 7 a.m. to 7 p.m. five days a week.

Lev, who died suddenly of a stroke five years ago at the age of82, "would have been very happy about the way his college hasdeveloped," says its outgoing president. "He reluctantly agreed thatthe Hebrew name of the men's college be Machon Lev in his honor becausewe said it would help advance the school."

Bodenheimer headed the development team at JCT's ResearchCenter for Driving Safety and Injury that produced the MAROM system fordetecting tailgating and speeding by vehicles on the road. He workedwith Zvi Weinberger, an electrooptics expert who became the thirdpresident of the college. The computerized distance-speed monitor usesinvisible infrared beams and a built-in video camera to record imagesof the license plates of drivers who exceeded speed limits or commitother traffic violations. It has been tested, proven successful andapplied in several countries but Israeli traffic court judges weresuspicious that it would take some of their power away by providingincontrovertible evidence, so it was never adopted here. The companythat produced it ran out of money and closed. Nevertheless, saysBodenheimer, it saved many Israeli lives when it was tested.

Weinberger, who never earned a Ph.D. but with his self-taughtelectrooptics expertise never needed one, left his mark as president by"strengthening the beit midrash and the religious studies'staff, while Nebenzahl - Israel's former State Comptroller - "gave itinternational recognition and attracted foreign donors."

BODENHEIMER declared in his first Jerusalem Post interviewas president that he would open a similar college for religious women -and he kept his promise, even though the idea aroused much oppositionfrom some board members and rabbinical staffers. Today, JCT's MachonTal produces superb graduates in its academic nursing school plus mostof the fields in which the men at Machon Lev win undergraduate degrees- electronic engineering, applied physics/electrooptical engineering,medical engineering, software engineering, computer sciences,computational chemistry, industrial engineering, managerial accountingand information systems, technical management and marketing. This year,Machon Lev introduced a master's in business administration (MBA) thatincludes a heavy dose of Jewish business ethics. The electroopticsengineering program reputedly produces graduates comparable to those ofthe Technion-Israel Institute of Technology in Haifa.

The nursing school is part of Machon Tal's "campus"of rented buildings in Jerusalem's Givat Shaul quarter. Machon Naveh,on the main Givat Mordechai campus, is an evening college for haredimen, most of whom study in yeshivot during the day, while Machon Lustigis a haredi women's institute for technology and management in RamatGan. There is also a preparatory program for men with weak backgroundsin scientific subjects and Torah studies, an on-campus technologicalyeshiva high school for 200 boys and special programs for French andEnglish speakers.

THE SOUND of French is very frequent on the men'scampus, says Bodenheimer, since numerous Jewish families who feeluncomfortable with the growing anti-Semitism in France have sent theirsons to study in the hope that they themselves will follow. During thehuge wave of aliya from the former Soviet Union, JCT's preparatoryprogram accepted thousands of young men who didn't have a strong Torahbackground, but today, most of them are haredim who in yeshivot learnedno English, science, computer studies or advanced math; today, thereare similar efforts to help Ethiopian immigrants attend the college.

JCT also has a strong academic (Atuda) program run incooperation with the Israel Defense Forces for 18-year-olds who willserve as officers and professionals for a minimum of six years aftercompleting a four-year degree (for the sake of full disclosure, one ofmy sons joined the Atuda there and graduated three years ago inelectrooptics and is now beginning JCT's MBA program, while the other,18, has just started electronic engineering studies as an Atudacandidate). Bodenheimer acknowledges that modern Orthodox yeshiva highschools generally encourage their pupils to go into hesder yeshivaprograms or pre-military yeshiva studies rather than apply to theAtuda.

AFTER THE shocking Madoff affair hit Jewish philanthropistsvery hard, Bodenheimer concedes that "it's harder to get new donors. Wehave to be more creative. Donations used to comprise 15 percent of theoperating budget, but we have cut it down to half, as I worried that ifthere were a financial crisis abroad, it would hurt our functioning.But our development budget is almost entirely dependent on donations,so there is less development now."

Still, JCT has been given rights to adjacent land forsignificant expansion of the main campus, and has been promised land afew kilometers away as a permanent campus for Machon Tal. "The momentwe get the land, there will be donors. Already, Machon Tal is thelargest non-coed producer of female engineers in the world."

Bodenheimer praises Jerusalem Mayor Nir Barkat, who will speakat the JCT 40th anniversary dinner this week and is in regular contactwith the college. "I think he has the necessary understanding of whatwe do and what is needed. He did a lot of homework when he was head ofthe opposition at City Hall. He is a businessman who knows how todevelop the city."

A newpoll shows that most young haredi men want to earn an academic degreein a religious college so they can support their families, even thoughstudying Torah remains the ideal.

"They understand that without an academic degree, theirsalaries will be low. Many live in abject poverty. The average haredicouple have eight children, and there is a heavy burden on the women,who run the home, give birth and go out to work. As there are fewavailable teaching positions, they have to learn other professions. Butthe average husband still goes to kollel to study Torah," says Bodenheimer. "There is an uneven yoke."

The prominent billionaire industrialist from Tefen, EitanWertheimer, established the Halamish program, now based at JCT, thatawards scholarships to the most-promising haredi yeshiva students.Their rabbis give individual permission to participate, and some aresons of prominent rabbis. But there are about 100,000 haredi yeshivastudents from age 20 to 60, so academic study is not yet a 'danger' totheir yeshivot. Going to college, getting a degree and earning a livingis common among haredim in the US, but not yet here, Bodenheimer notes.

Several gender-separated programs around the country grantdegrees to haredi men and women; they are not independent institutionsof higher learning but a "platform for universities" who grant theirown degrees. "The Council for Higher Education is in a quandary aboutrecognizing haredi institutions." But Bodenheimer does not regard theJerusalem College of Engineering - officially a branch of Haifa'sTechnion located across from the JCT campus and with some 800 male andfemale students - as competition. "One of its founders, formerJerusalem municipal treasurer Uzi Wechsler, has said his ideal is toreach the level of our college."

JCT is aware of the current difficult job market, and has afull-time staffer who coordinates job placement for graduates and aprogram that enables current students to work part-time in Jerusalemcompanies. It closed down PATIR, JCT's commercial arm, in 1993, due tothe college's inability to offer financial support when the startups'official status ended after two years. Today, there are a handful ofstartups on the JCT campus staffed by some of its lecturers andprofessors or graduates as well as outsiders. "We want startups here.It's very healthy that our people can do research and development,"Bodenheimer states.

Although Dana-Picard will certainly pave JCT's future in hisown way, Bodenheimer has a proposed target for the college 16 yearsahead. "I hope it will become a Torah-based university - even if itwon't officially be called a university. I predict it will have astudent body of at least 10,000 and offer degrees in the natural andsocial sciences as well. Due to ups and downs in the economy, itshouldn't offer only engineering and exact science studies. JCT hascontacts with religious teachers seminaries, and they would becomeaffiliated and offer bachelor's degrees rather than just teachingcertificates. "They don't have to be on our main campus," he adds.

Dana-Picard, who was chosen from some 20 candidatesfor the presidency and was an outstanding head of JCT's mathematicsdepartment, "does not have intense management experience, but he knowsthis institution very well and can learn administration on the job,"concludes Bodenheimer. "I will go on sabbatical for a while and returnto teach some physics/electrooptics courses at Machon Lev and MachonTal."

A room has already been set aside for him as an office.

"I would like to JCT to promote even more Torah and derech eretz - Jewish learning combined with gainful employment. Each one advances the other, and together they bring unity," he concludes.