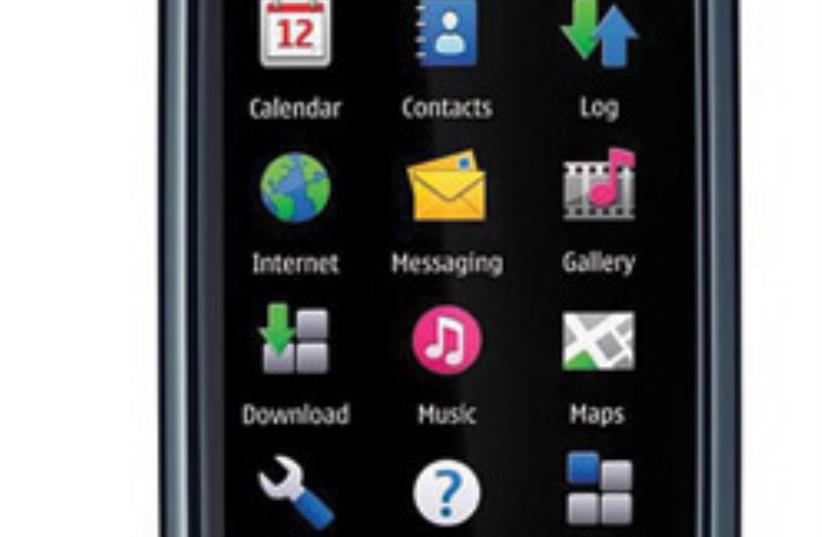 The latest attempt to take the crown comes from No
(photo credit: Courtesy)
Advertisement
As the anticipation mounts for Israel's first"kosher," official iPhone experience, attention has turned to the slewof "iPhone killers" that have avalanched at us this summer. It seemsthat every big cellphone maker has gotten on thetouchscreen/wifi/accelerometer/application-rich/phone/Internet-device/toy,and, of course, each company is touting their product's superiority.

On paper, many of these devices really are betterthan the iPhone, feature for feature. The Samsung Omnia II/Jet (S8000)has a faster processor and a better screen than the iPhone, and theSony Ericsson C905 has a better (far better) camera than the iPhonecould even dream of (ditto the LG Arena). And then there is the PalmPre, in a class by itself and the first of the new generation of"killer" devices that are trying to wrest the title of coolest phonefrom Apple.

The latest attempt to take the crown comes from Nokia, whichrecently released the N97 and its somewhat older little brother, the5800 XpressMusic, which I recently acquired.

There's a lot to be said for the Nokia phones (which I will say below).

But before I am accused of shilling for theFinns, let me say it clearly: The N97 (which I spent some time with)and the 5800XM (which I use) are not iPhone killers, simply becausethey are not iPhones. The two cameras, the video recording capacity,the mini flip-out keyboard (on the N97), the extreme memory capacity onthe N97 (32 GB built in, expandable to 48 GB) and so on, will never beenough, simply because they're not made by Apple.

Why? Can a brand name really trump features to such an extent?The only thing I can think of is that the 1984 Apple commercialintroducing the Macintosh - with the jogger smashing the "Big Brother"screen controlling all the automatons - has really sunk deep into theWestern psyche, forever branding Apple as the counterculture,rebellious upstart that always knows better than its "elders." As theowner of no fewer than five Macs (two Macbooks, two Mac Minis and aniMac), I'm just as susceptible to this mind-melding. (Note that Ididn't say the Macs weren't better than anything anyone else isoffering, but as a "Machead" I am very familiar with this mind-set. Isa $1,600 Macbook Air really so much better than a $400 netbook?)

The only devices I see as having a chance ofreally "killing" the iPhone are perhaps the phones built on Google'sAndroid, because Google has that cool counterrevolutionary cachet aswell.

But I digress. As much as I and you would like a "real" iPhone,we don't want to shell out the huge sums they can be expected to costhere in Israel. (Even if they are offered at a subsidized price, youare going to end up paying a goodly - perhaps a princely - sum.)

With the arrival and the clamoring for the iPhone, however,prices on other wannabe killers have dropped somewhat (the N97 is toonew, but a number of other touchscreen, etc., devices were on sale atOrange when I paid them a recent visit). They may not be iPhone"killers," but they are good enough to compete in the same space,allowing them to maybe beat up and "injure" the iPhone, at least onsome features.

Always on the lookout for a bargain (or, always cheaping out,depending on how you look at it), I picked up a Nokia 5800XM at Orangerecently for NIS 499, far less than the $299 I was prepared to spend onan unlocked version of the phone at Amazon. According to Nokia, someseven million of the things have been shipped since it was introducedin late 2008, so I guess I was in good company.

I mentioned earlier that "perceived coolness" is one of themajor reasons for the iPhone's success, but there is also one thing theiPhone has over any other device sold by any other manufacturer: theiPhone Appstore and the iTunes store for iPhones. Having perfected thetouchscreen/accelerometer, etc., device first, Apple was able to getmany developers to write applications for the iPhone; there arecurrently more than 65,000 applications in the App Store's bevy. Bynow, every phone maker has an app store for its platform, but accordingto this handy chart (http://tinyurl.com/l3kekv), the Apple version hasfar more - far, far more - applications than any other version.

If the App Store is the real secret behind the iPhone'scontinued appeal, despite the its relative feature deprivation comparedto the other "killers," both Google and Nokia intend to remedy thatsituation.

The Android Market (as the store is called) already hasthousands of apps, and Nokia just recently opened its app store, NokiaOvi (which is supposed to mean "door" in Finnish). The applications inthe store are specifically for Nokia's higher-end N-series andtouchscreen phones, with the major in-app development and sales to comeas Nokia moves more N97s.

Browsing the Ovi store, I came across a couple of great titles.JoikuSpot is a nice Symbian app that lets you share your phone's 3Gconnection as a modem for a laptop when you're away from a wifihotspot.

Even though the official Nokia Internet radio application forthe N97/5800XM is still under development, I found a great applicationcalled Tunin.FM, which lists hundreds of stations that can be accessedwith my phone, including some of my favorites. And then there's Fring,the be-all communication program that lets you use Skype (includingSkypeout), Twitter, Facebook, MSN Messenger, ICQ and a slew of others.And, of course, there's the built-in GPS location finder, voice-drivendriving directions (in Hebrew or English), etc.

My favorite app, though, is one of the few I actually opened upmy wallet to purchase. Called Myphone, it lets you turn your Symbiandevice into an "iPhone," at least in look and feel. From the "slide tounlock" to the little iPhone-like icons for your favorite applications,Myphone (from a site with the unlikely name MMMOOO.com), is enoughiPhone for me - considering the 5800XM didn't cost me the thousands a"real" iPhone would!