Liberal Democrat leader meeting with party leadership to convey the details of the coalition deal struck with Tories; Conservatives: William Hague to be the new Foreign Minister.

By ASSOCIATED PRESS
MAY 12, 2010 00:23
Cameron new PM
(photo credit: ASSOCIATED PRESS)
Advertisement
LONDON – Conservative Party officials say that Liberal Democrat leader Nick Clegg will serve as Britain's deputy prime minister in the country's new coalition government.Clegg and four other members of his Liberal Democrats will hold cabinet posts, according to those two officials.Ex-Conservative Party leader William Hague will serve as Foreign Secretary, and Conservative lawmaker and close ally of David Cameron, George Osborne has been appointed as new Treasury chief, according to the Conservatives. 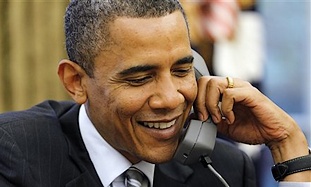 President Barack Obama has telephoned his congratulations to Britain's new prime minister, Conservative leader David Cameron, and invited Cameron and his wife to visit Washington this summer. Obama affirmed his commitment to US-UK "special relationship."Cameron became Britain’s youngest prime minister in almost 200 years Tuesday, after Gordon Brown stepped down and ended 13 years of Labour at the helm of the government.
In a carefully choreographed dance, Cameron visited Buckingham Palace and was asked to form a government by Queen Elizabeth II less than an hour after Brown himself tendered his resignation to the monarch.Cameron, whose party won the most House of Commons seats in last week’s election but fell just short of a majority, is, at 43, the youngest British leader since Lord Liverpool in 1812.On the steps of 10 Downing street, Cameron said, "on behalf of the whole country I would like to pay tribute to the outgoing Prime Minister for his long record of dedicated public service."And he added: "I aim to form a proper and full coalition between the Conservatives and the Liberal Democrats." 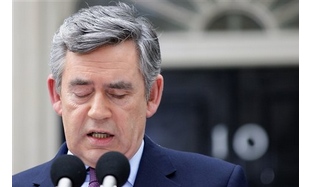 Conservative sources say Nick Clegg will be deputy prime minister and the Liberal Democrats will hold 5 cabinet positions.Standing outside 10 Downing St. alongside his wife Sarah, Brown announced he would travel to see the monarch to resign – allowing Cameron to take office, possibly as part of deal with Nick Clegg, leader of the Liberal Democrats.“I wish the next prime minister well as he makes the important choices for the future,” said Brown. “Only those who have held the office of prime minister can understand the full weight of its responsibilities and its great capacity for good.” Brown said he had “loved the job, not for its prestige, its titles and its ceremony, which I do not love at all.” "No, I loved the job for its potential to make this country I love fairer, more tolerant, more green, more democratic, more prosperous, more just – truly a greater Britain.” After his brief statement, the 59-year-old Brown walked hand-in-hand with his wife and young sons John and Fraser down Downing Street, where a car waited to take him to the palace  Labor lawmakers downplayed the prospects of their party clinging to power – saying the party clearly lacked the mandate to govern after finishing a distant second to the Conservatives in last week’s election.“I think the sense that people will bargain on any basis to stay in power is unacceptable,” said Charles Falconer, who served as justice minister under Brown’s predecessor Tony Blair, adding it was time for Labor to “call it quits now.”Five days after a May 6 vote that produced no outright winner, the Liberal Democrats were being wooed by both Labor and the Conservatives, hoping to extract maximum concessions in return for propping up a new administration.But senior Labor legislators said they feared such a pact – dubbed a “coalition of the defeated” by Conservatives – would lack legitimacy and anger the public, who would then wreak revenge on Labor candidates in future elections.“We have got to respect the result of the general election and you cannot get away from the fact that Labor didn’t win,” Labor’s Health Secretary Andy Burnham told the BBC.

Former Labor Party chairman Ian McCartney said Labor should forgeta deal to stay in power, and focus on regrouping in opposition withoutBrown at their helm.Cameron’s party has spent five daysnegotiating with the Liberal Democrats, led by Nick Clegg, and has saidit is prepared to agree to either a formal coalition or a looser pactin which the Liberal Democrats support the Conservatives’ legislativeagenda.Clegg’s Liberal Democrats have demanded that Britainchange its voting system toward proportional representation, whichcould greatly increase their future seats in Parliament. In the latestelection, Liberal Democrats won almost a quarter of the overall votebut only 9 percent of House of Commons seats.
Advertisement
Subscribe for our daily newsletter