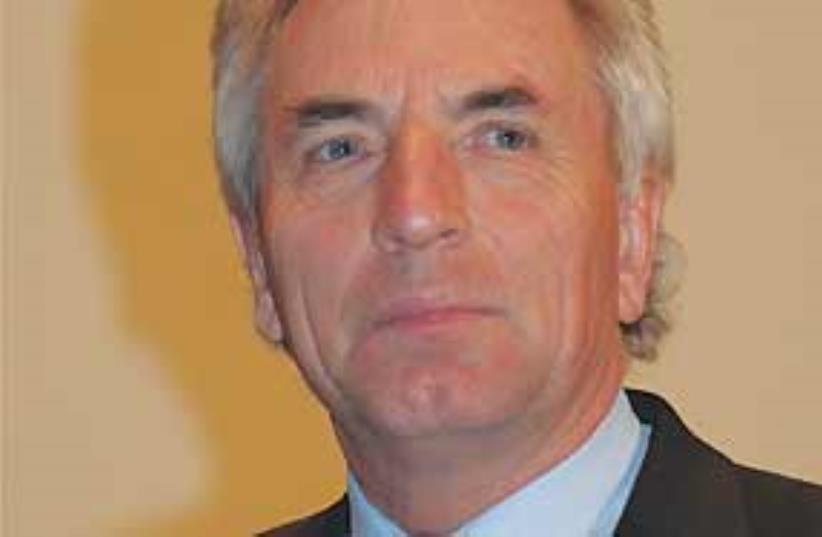 Jorgen Roters
(photo credit: Courtesy)
Advertisement
BERLIN – Mayor of Cologne Jürgen Roters (Social Democratic) and its sister city partnerships, Cologne-Tel Aviv and Cologne-Bethlehem, issued a joint statement last week blasting the long-standing anti- Israel exhibit in his community’s bustling Cathedral Square pedestrian-only zone.According to the resolution, “The anti-Semitic and anti- Israel presentation of the socalled ‘Cologne Wailing Wall’ spreads hatred against humans and feeds anti-Israel resentments.”RELATED:
Cologne tolerates 'anti-Semitic’ exhibitMembers of the major parties on the Cologne city council, representatives of the Catholic and Evangelical churches, the Society for Christian- Jewish Relations in Cologne, and the local Jewish community also signed the resolution.Roters and the Cologne authorities called on Walter Hermann, the organizer of the “Cologne Wailing Wall,” to “immediately remove the installation that shows contempt for humanity” and said the city of Cologne would no longer accept Hermann’s exhibit and approach.The resolution said that Hermann has displayed his hatefest against Israel since 2004.During his visit to Israel earlier this month, Roters presented the resolution to his Tel Aviv counterparts.Hermann’s display of an anti-Semitic cartoon in January triggered a legal complaint and a grassroots campaign from the non-Jewish theater director Gerd Buurmann. The cartoon showed a man sporting a Star of David on his bib as he devoured a young Palestinian boy with a fork while draped in an American flag and a knife with the word “Gaza.” A glass filled with blood stood next to to his dinner plate.Buurmann filed a legal protest earlier this year, asserting a violation of Germany’s anti-hate law, which prohibits incitement against minority groups. In April, the Cologne public prosecutor dismissed Buurmann’s grievance, saying the cartoon represented criticism of Israel’s policies in Gaza and not hostility toward Jews.The Israeli Embassy then said: “If one shows a figure with an Israeli flag devouring a Palestinian child, this reminds us of the most scurrilous accusations of ritual murder in European anti-Semitism... We don’t interfere in the decisions of German judicial authorities.But at the same time, we are convinced that the cartoon was of a clearly anti-Semitic nature and that it incites hatred and violence.“The claim that one must distinguish between hatred of the Jewish people and hatred of the State of Israel is absolutely inappropriate and leaves a bad taste.”It is unclear if the joint resolution will compel Hermann to pull the plug on his exhibit.Some say anti-Israeli sentiments are high in Cologne, and that this helps explains the civil society’s failure over the years to mount widespread protests against the “Cologne Wailing Wall.”In April, The Simon Wiesenthal Centre, a Los Angeles-based human rights organization, applauded Gerd Buurmann for demanding that the “Cologne Wailing Wall” antisemitic exhibit be closed.The Wiesenthal Centre’s Director for International Relations, Dr. Shimon Samuels, praised Buurmann “for his intention to lead a civil legal action suit against the exhibit’s designer, Walter Herrmann, reportedly notorious for his hatred of Israel.”According to the Wiesenthal Center statement, Jürgen Roters, had previously "endorsed the Prosecutor by his silence and done nothing to condemn Hermann’s hatemongering." "Cologne’s citizens should protest the resuscitation in their city of a cartoon adapted from the Nazi 'Der Stürmer' newspaper of the 1930s. Our Centre will closely monitor the situation." said Samuels.
Advertisement
Subscribe for our daily newsletter