Proinsias De Rossa: "Hamas has said it is willing to recognize Israel; we have to ask why this is not reported in the media very often."

By RUTH EGLASH
SEPTEMBER 16, 2010 01:02
Advertisement
DUBLIN – Proinsias De Rossa, an Irish member of the European Parliament, on Wednesday called for Hamas to be recognized as a partner for peace and for the Gaza leadership to be immediately included in the current round of negotiations. 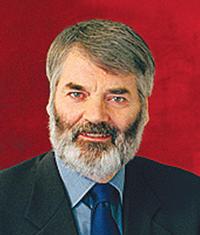 Some say Hamas is a terrorist organization but they were elected [in January 2006] to power on the basis of improving social conditions for the people in Gaza, De Rossa, a former Irish social welfare minister and a member of the Labor party, told a conference in Dublin aimed at examining “media and conflict.”RELATED:
My Word: When Irish eyes aren’t smiling
Guest Columnist: The Irish boycott: What a jokeAt the conference, whose participants included experts on “conflict regions” and journalists from Ireland and around the world, De Rossa said that Hamas should have representation in the current round of talks between Israelis and Palestinians. He also said that Hamas should be officially recognized by the European Union.“Many people in Europe have said privately that they are willing to recognize Hamas but the policy will not change unless the US changes its view first,” said De Rossa, a member of the EU Delegation for Relations with the Palestine Legislative Council and a frequent visitor to the region.

Hamas seized power in the Gaza Strip in June 2007. The US has not recognized Hamas and continues to view it as a terrorist organization.“Hamas is a coalition of different groups with different views, both secular and religious,” De Rossa told the audience. “Hamas has said it is willing to recognize Israel; we have to ask why this is not reported in the media very often.”

De Rossa also spoke about restrictions placed on journalists covering conflict zones, especially in Israel and Palestinian areas. While he told The Jerusalem Post that he did not believe in sanctions, he did say that the EU should make its position clear that it disapproves such measures preventing journalists from doing their jobs.“The EU has a large economic role in Gaza, the West Bank and Israel; we have to make it clear that such behavior is not acceptable,” he said.The conference, which runs through Friday, is sponsored by the European Union and includes presentations from journalists and media experts from Europe (including Eastern Europe) and the Middle East. While the goal of the gathering is to discuss the media’s role in conflicts in general, the opening sessions on Wednesday focused almost exclusively on the Arab-Israeli conflict.
Advertisement
Subscribe for our daily newsletter