Fertile area split between Kyrgyzstan, Tajikistan and Uzbekistan has been rife with ethnic and political tension since Bakiyev was ousted in April.

By ASSOCIATED PRESS
JUNE 13, 2010 14:15
uzbek man injured 311
(photo credit: AP)
Advertisement
OSH, Kyrgyzstan —Russia sent a battalion of paratroopers on Sunday to reinforce security at its air base in Kyrgyzstan as, the Interfax news agency reported, as Kyrgyz mobs burned Uzbek villages and slaughtered their residents Sunday as ethnic rioting engulfed southern Kyrgyzstan. The Kyrgyz government ordered troops to shoot rioters dead but even that measure failed to stop the spiraling violence.More than 100 people have been killed and over 1,000 wounded in the impoverished Central Asian nation since the violence began Thursday night. Doctors say the estimated death toll is low, because wounded Uzbeks are too afraid of being attacked again to seek treatment in hospitals.Thousands of Uzbeks have fled in panic to the border with Uzbekistan after their 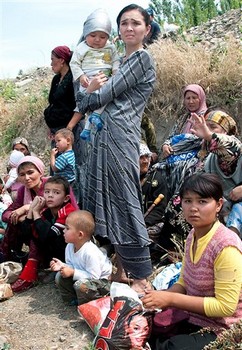 homes were torched by roving mobs of Kyrgyz men. Uzbek women and children were gunned down as they tried to escape, witnesses said.Fires set by rioters have destroyed most of Osh, a city of 250,000, and looters have stolen most of its food. Triumphant crowds of Kyrgyz men took control of most of Osh on Sunday while the few Uzbeks still in the city barricaded themselves in their neighborhoods.The riots are the worst violence since former Kyrgyz president Kurmanbek Bakiyev was ousted in a bloody uprising in April and fled the country. The Uzbeks have backed the interim government, while many Kyrgyz in the south still support the toppled president.Interim Kyrgyz President Roza Otunbayeva blamed Bakiyev's family for instigating the unrest in Osh, saying they aimed to derail a constitutional referendum to be held June 27 and new elections scheduled for October. A local southern official said Bakiyev supporters attacked both Kyrgyz and Uzbeks to ignite the rioting.Otunbayeva asked Russia for military help to quell the violence, but the Kremlin refused, saying it would not meddle in an internal conflict. Russia did send a plane to deliver humanitarian supplies and evacuate some victims as well as a battalion of paratroopers to secure its air force base in the country.Kyrgyzstan hosts both US and Russian military air bases, but they are in the north, away from the fighting.The US Manas air base in the capital, Bishkek, is a crucial supply hub for the coalition fighting the Taliban in Afghanistan. A Pentagon spokesman in Washington said Saturday that the interim government had not asked for any US military help.Bakiyev was propelled to power in 2005 on a wave of street protests, but his authority collapsed amid growing corruption allegations, worsening living conditions and political repression.Gunfire rang out Sunday in another major southern city, Jalal-Abad, where the day before a rampaging mob burned a university, besieged a police station and seized an armored vehicle and weapons from a local military unit. Thousands of Kyrgyz men brandishing sticks, metals bars and hunting rifles gathered at the city's horse racing track, shouting anti-Uzbek slogans while frightened police stayed away.Kyrgyz mobs killed about 30 Uzbeks Sunday in the village of Suzak in the Jalal-Abad region, Talaaibek Myrzabayev, the chief military conscription officer in Bishkek told The Associated Press. Another Uzbek village, Dostuk, was burned by Kyrgyz assailants, but the number of casualties there was unclear, he said.Ethnic Uzbeks also ambushed about 100 Kyrgyz men Sunday on a road near Jalal-Abad and took them hostage, he said.In the nearby village of Bazar-Kurgan, a mob of 400 Uzbeks overturned cars and killed a police captain, local political activist Asyl Tekebayev said. Residents said armed Kyrgyz men were flooding into the village to retaliate.In 1990, hundreds of people were killed in a violent land dispute between Kyrgyz and Uzbeks in Osh, and only the quick deployment of Soviet troops quelled the fighting. With no Russian troops in sight, the interim government late Saturday announced a partial mobilization, calling up military reservists up to 50 years old."No one is rushing to help us, so we need to establish order ourselves," said Talaaibek Adibayev, a 39-year old army veteran who showed up at Bishkek's military conscription office.The official casualty toll Sunday rose to at least 80 people dead and 1,066 wounded, with more than 600 hospitalized, the Health Ministry said. The figure didn't include the 30 Uzbeks killed near Jalal-Abad,Witnesses said bodies were lying in the streets of Osh on Saturday and more were scattered inside its many burned buildings. As Uzbek refugees, mostly women and children, fled the city toward the border witness said many were shot at and killed.Maksat Zheinbekov, the acting mayor of Jalal-Abad, said in a telephone interview that Bakiyev's supporters triggered the riots by attacking both Uzbek and Kyrgyz people. The rampaging mob quickly grew several hundred to thousands, he said.The fertile Ferghana Valley where Osh is located once belonged to a single feudal lord, but it was split by Soviet dictator Josef Stalin among Uzbekistan, Kyrgyzstan and Tajikistan. The Stalinist borders rekindled old rivalries and fomented ethnic tensions.Both ethnic groups are predominantly Sunni Muslim. Uzbeks are generally better off economically, but they have few representatives in positions of power and have pushed for broader political and cultural rights.Kyrgyz residents interviewed by Associated Press Television News in Osh blamed the Uzbeks for starting the rioting late Thursday with attacks on students and Kyrgyz women. The crowds of ethnic Kyrgyz from neighboring villages then streamed into the city to strike back, they said."Why have them Uzbeks become so brazen?" said one Osh resident, who gave only her first name, Aigulia, because she feared for her safety. "Why do they burn my house?"Aigulia said her house was destroyed by Uzbeks overnight and all her Kyrgyz neighbors had to run for their safety. She said the area was still unsafe, claiming Uzbek snipers were shooting at them.A Kyrgyz man, Iskander, said he and others burned Uzbek property to avenge their attacks."Whatever you see over there — all the burnt restaurants and cafeterias were owned by them and we destroyed them on purpose," he told APTN. "Why didn't they want to live in peace?"