'Ladakh turned on its people'

By YIFA YAAKOV, SPECIAL TO THE JPOST
AUGUST 16, 2010 15:45
Ladakh floods 311 yifa 4
(photo credit: Yifa Yaakov)
Advertisement
DELHI – In the far north of India, beyond Delhi, Shimla and Dharamshala, lies a remote little region called Ladakh. Sandwiched between Pakistan, Afghanistan, China and the imposing hilly state of Himachal Pradesh, its strategic importance is undeniable. Its proximity to constantly conflicted Kashmir makes it an important military hub.But first and foremost, Ladakh is a cultural treasure trove showcasing the way a people – Buddhists, Muslims, Aryans, Mongols and others thrown together in a distinctly central Asian mix – can survive and even flourish in one of the most challenging, isolated regions in the world, a veritable high-altitude desert.RELATED:
Photo gallery: Authorities warn of more Pakistan floods
30 Israelis evacuated from flooding in LadakhBut last week, the land of Ladakh raged and turned on its people. Nature changed its course, cloudbursts brought flash floods, mudslides and avalanches to this usually peaceful region. Over a thousand were declared missing, hundreds feared dead.In Ladakh’s only “big city,” Leh, the damage was devastating. Outside of Leh, it was bound to be worse.Between June and September, when the snow melts and the roads open, Leh is a top tourist destination. Hundreds of backpackers and trekking aficionados pour in from countries all over the map, from South Korea to Canada to Israel, and from India’s 26 states. 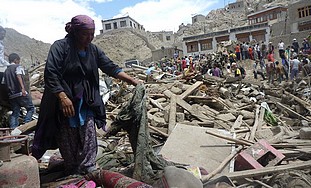 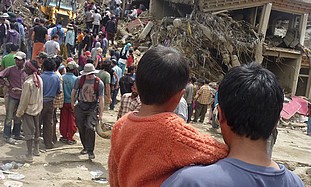 Flood-ravaged Ladakh, India
To supply these tourists with hot running water, electricity and continental food means stretching Leh’s already shoddy infrastructure to the limit and playing host to hundreds of Kashmiri traders eager to make a quick buck away from their troubled native land. And so it goes every summer – but not when nature strikes.When nature strikes, when Leh is buried under mud, backpackers roam the streets at a loss for words. Stranded, they drift toward the areas that suffered the brunt of the damage, watching in awe as the local men, women and children energetically lift stone after stone and log after log, plunging their shovels into the hard, dry mud. An old woman passes a heavy rock to her grandchild, who passes it to a Kashmiri, who passes it to a tourist from France, Germany, Spain, Poland, New Delhi – and, yes, Israel.On ordinary days, the Israeli presence in Ladakh is so strong that handwritten signs in Hebrew direct backpackers to the best trekking agency, the best moneychanging facility, the best shakshuka. When disaster strikes, they are right there with the others, digging, setting up makeshift medical facilities, rushing on motorbike from village to village. Some have gone trekking in the mountains and valleys, and their friends are hard at work compiling lists of names of those in possible need of rescuing.The Indian army has also mobilized, building impromptu bridges, fixing the demolished roads, sending much-needed supplies by helicopter and airlifting people out of flood-stricken areas.The locals, however, are inconsolable. They cannot remember a disaster of this magnitude ever occurring in Ladakh in their lifetime. Everyone knows someone whose shop or house was flooded. Fearing torrential rains, many take refuge in the hills surrounding Leh, spending the night in Tata trucks – India’s notoriously noisy, colorfully painted, utterly ubiquitous commercial transport vehicles – or in cars and tents. Those who stay behind in Leh sit together and comfort each other by candlelight, wondering if they should have fled to higher ground and waiting for drinking water that never comes. They inspect their roofs worriedly, wondering if they will survive that night’s downpour, and don’t forget to check their pantry.Most shops are closed, out of identification with and sympathy for those affected by the tragedy. The shops that have opened have all amassed queues; young Israeli backpackers are buying enough bottles of water to prepare for a nuclear war.Bollywood superstar Aamir Khan promises to help restore a Ladakhi school he made infamous in the mega-hit 3 Idiots.The death toll, meanwhile, is rumored to be far higher than originally reported.Ordinarily, Ladakh gets very little rain. Its inhabitants have lived in mud houses for centuries, carefully cultivating irrigation channels out of glacial melt-water and meticulously growing a select number of crops – mostly different kinds of barley – on all but barren land. 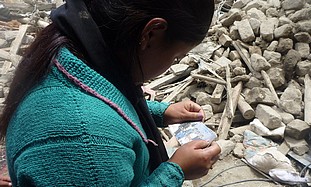 Flood-ravaged Ladakh, IndiaThe people of Ladakh are not typical Indians. Ethnically, they are not really Indians at all – most are Tibetan Buddhists, and indeed, Ladakh shares a border with Chinese-occupied Tibet. The Dalai Lama, in exile in popular backpacker destination Dharamshala, occasionally visits Ladakh, and his face can be seen on everything from temple altars to buses to trucks.But Ladakh is not Tibet. It was an independent mountain kingdom for several centuries, occupying an important position on the silk route and on the crossroads between the Himalayas and the Karakorum mountains.Its people, over the course of more than a dozen centuries, developed a unique identity and culture and grew into a hardy, resilient people. They developed different uses for everything, from the barley they grew to their animals’ excrement.They survived on salty yak butter tea, spun voluminous sheep’s-wool clothes and adhered to the principles of Buddhism.When Westerners were first permitted to penetrate this region, in 1974, they encountered smiling, close-knit family units beaming with contentedness and a sense of belonging to the land. They saw a beautiful moon-like landscape that presented its dwellers, and more so its cultivators, with challenges time and time anew.In Ladakh, a society which has already been fractured by Western influence turns its gaze skyward. In Chonglamsar, a Tibetan refugee camp 5 kilometers away from Leh, the devastation is so complete that it almost appears as though the village has always been buried under mud. Cars can be seen sitting stationary half inside, half outside the mire; shop facades are squashed and slanted, leaning down. Women stand on little islands of caked mud, digging into it with sticks to unearth stones with religious inscriptions carved onto them. The people and possessions will be dealt with later on, when the mud hardens enough for the army to bring in its heavy machinery.
Advertisement
Subscribe for our daily newsletter