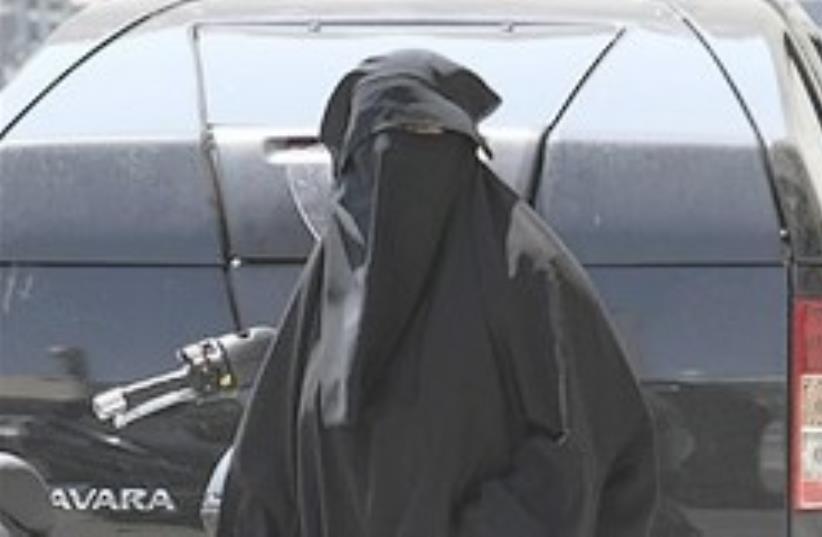 A woman wearing the niqab, a veil worn by the most conservative Muslims that exposes only a woman's eyes, walking in Marseille.
(photo credit: AP)
Advertisement
er voice trembling with emotion, the leader of an advocacy group for Muslim women and girls urged a French parliamentary panel on Wednesday to press for laws that would ban the wearing of Islamic body- and face-covering veils.

A woman wearing the niqab, a...
A woman wearing the niqab, a veil worn by the most conservative Muslims that exposes only a woman's eyes, walking in Marseille.
Photo: AP
Sihem Habchi appeared as the first witness before a newly created parliamentary group studying Islamic clothing such as burqas and niqabs - part of France's effort to integrate its growing Muslim population while preserving its heritage and secular roots.
The panel, chaired by a Communist Party lawmaker, will hold months of hearings before issuing a report, likely by January. It has no power to draft laws but could recommend legislation restricting or banning women from wearing head-to-toe Islamic robes that mask facial features in public.
The panel was announced in June, a day after President Nicolas Sarkozy all but prejudged the debate, saying that the robes make "prisoners" out of women and won't ever be welcome in France.
A ban could spur a backlash. A 2004 law in France banned wearing Muslim headscarves at public schools, along with Jewish kippot and large Christian crosses. That law sparked fierce debate both at home and abroad.
Habchi spoke passionately of her family roots in the former French colony of mostly Muslim Algeria, and how France needs to do more to protect women and root out feelings of segregation.
"The survival of many young women depends on" new laws to protect them, she said. "They get around with their ghetto on their backs." She said such full-body veils contribute to "the separation of populations."
Habchi heads Ni Putes, Ni Soumises - Not Prostitutes, Not Submissive - an outspoken group fighting to improve the lot of Muslim women and girls in poor areas. The group's founder Fadela Amara, now the government's urban affairs minister, supports a ban on full-body veils.
The parliamentary panel is also to hear from supporters of the veils, though the list of witnesses has not yet been completed, the panel said.
Some Muslim leaders interpret the Quran to require women to wear a headscarf, niqab or burqa in the presence of a man who is not their husband or close relative.
France is home to Western Europe's largest population of Muslims, estimated at about 5 million. A marginal but growing group of French women wear veils that either cloak the entire body or cover everything but the eyes.
Le Figaro newspaper, citing a confidential Interior Ministry report on Islam, reported Wednesday that it estimates no more than 2,000 women in France wear the niqab or burqa. A ministry spokeswoman contacted by The Associated Press for comment declined comment.