'Obama will have a harder time brokering ME peace deal'

By ASSOCIATED PRESS
NOVEMBER 3, 2010 12:56
Obama speaking flag 311 AP
(photo credit: Associated Press)
Advertisement
With less bargaining power in Congress, US President Barack Obama would have a harder time brokering a peace agreement between Israel and Palestine, analyst Christianto Wibisono said Wednesday, after Democrats lost control of the US House of Representatives."And as long as there is no peace between Israel and Palestine, things aren't going to go smoothly in Afghanistan and Iraq."RELATED:
US: Election results won't affect Mideast policy
Editorial: Obama's opportunity
Jewish candidates secure major wins in House, SenateZalman Shoval, a Netanyahu confidant and former Israeli ambassador to the US, said the election results marked a vote of no confidence in Obama — but he doubted the change in Congress would influence US-Israel relations and the US-led peace process."Foreign policy is the prerogative of the president, even if he is weak," said Shoval. 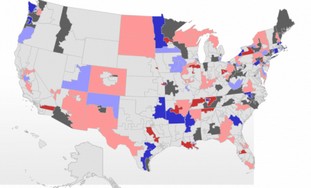 House standings as of Wednesday morning
Elsewhere in the world, longtime US allies Japan and Australia pledged that election results will not change their traditionally close ties with Washington."Whatever the election results are, Japan-US ties and our cooperation as part of the international society will not change," said Foreign Minister Seiji Maehara.Australian Prime Minister Julia Gillard's office called the partnership "strong and deep, and transcends party politics."

In Indonesia, where Obama spent part of his childhood, his former classmates and neighbors said they were sorry to see the tide turning in Washington, but expressed confidence he could still make a difference.

Many Indonesians hoped Obama's experience in their country would help bridge ties between the West and the Muslim world and influence policy in the Middle East."It will be harder for him, yes," said Sonni Gondokusumo, a former neighbor and playmate. "But he's not going to give up. He's going to keep struggling because this isn't just what's best for the world but for Americans. He still has two years to prove himself."Some analysts said they think the election results are more likely to change domestic policy than foreign policy."Policies on Afghanistan and Iraq are unlikely to change; they are already on course," said political analyst Anies Baswedanhe. "The same is true with US-Indonesian relations."
Advertisement
Subscribe for our daily newsletter