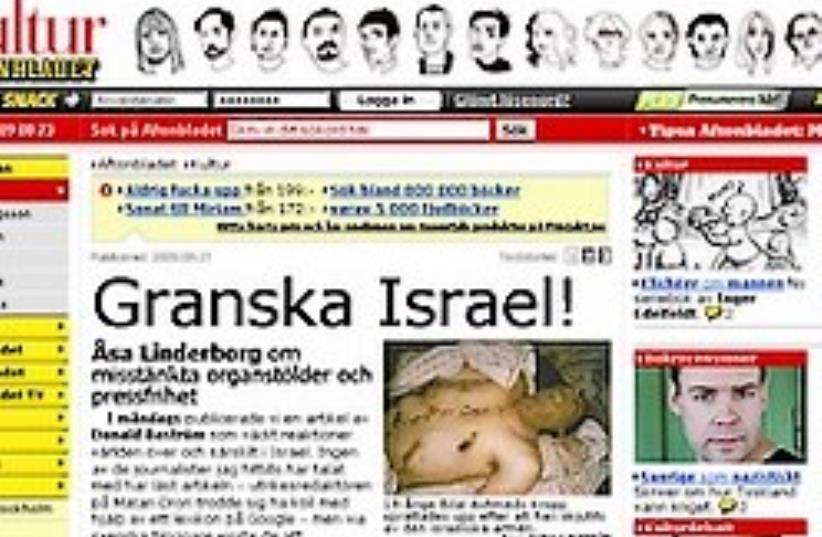 The organ harvesting article published in Aftonbladet
(photo credit: Screenshot)
Advertisement
An official representing the Swedish government in legal affairs has ruled not to initiate an investigation into the matter of an article claiming IDF soldiers kidnapped Palestinians to harvest their organs, AFP reported on Saturday.

Two complaints were filed with the Swedish Department of Justice over theAftonbladet report, asking that it determine whether it was a case of racial provocation that violated Swedish law.

According to the report, Sweden's Chancellor of Justice Göran Lambertz decided that the article, published in August, did not violate Swedish law, and therefore, Aftonbladet will not face a legal probe over the article.

The Swedish government has rejected Israeli calls to condemn the incendiary article that implied links between Palestinian claims that IDF soldiers killed Palestinians and harvested their organs, and the recent arrest in New Jersey of an American Jew suspected of illicit organ trafficking.

Shortly after the article was publish last month, Swedish Prime Minister Fredrik Reinfeldt said his government would not condemn the report.

"No one can demand that the Swedish government violate its own constitution. Freedom of speech is an indispensable part of Swedish society," Reinfeldt was quoted as telling the Swedish news agency TT.

In late August, an Israeli lawyer filed a $7.5 million lawsuit against the Swedish newspaper in the Manhattan Supreme Court.

The lawyer, Guy Ophir, who said the article's allegations were anti-Semitic and amounted to "racist blood libel" against Jews and Israeli soldiers.

E. B. Solomont contributed to this report