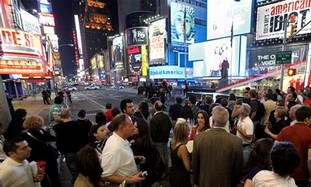 Police now believe a catastrophe was averted by technical failure of the explosive device.The White House said Sunday that President Barack Obama was being kept up to date on the investigation into the apparent car bomb found in New York City's Times Square.White House spokesman Nick Shapiro said in a statement that Obama, who attended an annual gala dinner Saturday night for White House news correspondents, praised the quick and effective response by the New York Police Department.'We avoided what could have been a very deadly event'New York Mayor Michael Bloomberg said at a news conference early on Sunday, "we are very lucky, thanks to alert New Yorkers and professional police officers. We avoided what could have been a very deadly event."The mayor went on to say a suspicious vehicle in Times Square "did indeed contain an explosive device."
.
Police Commissioner Raymond Kelly said at the same news conference the car contained three propane tanks, consumer-grade fireworks, two filled 5-gallon (19-liter) gasoline containers, and two clocks with batteries, electrical wire and other components. He said a black metal box resembling a gun locker was also recovered.Police were investigating a report that someone was seen running from the vehicle, a Nissan Pathfinder, at some point and were reviewing security videotapes, a police spokesman said.Police evacuated several residential and commercial buildings and cleared the streets of people. Police were deployed around the area with heavy weapons on empty streets in the heart of midtown Manhattan that normally teem with thousands of theatergoers and tourists.Some tourists reported hearing a small explosion hours after the car was first located.In December, a van without license plates parked in Times Square led police to block off part of the area for about two hours. A police robot examined the vehicle, and clothes, racks and scarves were found inside
Advertisement
Subscribe for our daily newsletter